Your next Epic & Extreme experience here...

The special guest of the event is Alvaro Onieva!
He will introduce his new creation: CLASH Kiteboards

We wait you for your test: http://www.rideclash.com
Top

Your next Epic & Extreme experience here...

So biggest party and big news coming soon to one of most extreme event in the summer...
International riders are welcome, contact us!

And one the day: freestyle Contest with prizes in gear from sponsors and
Hand made special Trophy... 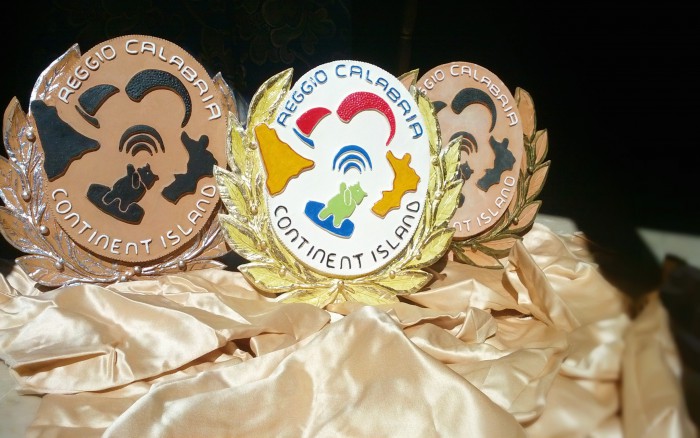 The Party is ready! 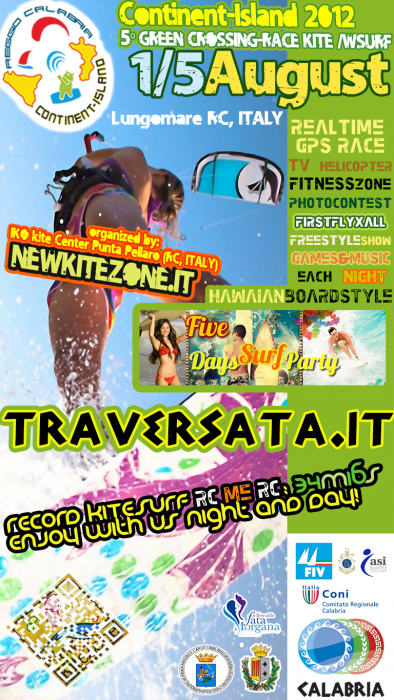 "In early August estreme sport and high technology combine with Greek mythology in one stunning event"
With the sea, air, currents, wind and waves to tame, the memories of an ancient past still live in modern sports, using ultra hi-tech. In Reggio Calabria from August 1st to 5th.

Everything turns around some very unique and specatular sport; kitesurfing, sailing and windsurfing groove the waves of the deep-sea - in the same straits of water where Ulysses tamed the elements, between sea and mythological monsters, between nature and mystery, adrenaline and fear, between pride and the thrilling challenge of man against himself.

Even the filming and coordination of the event by helicopter and television are not enough to cover all the aspects of the 5 days of competition, the training and the exhibitions. In the organisation of the 5th race it is clear we have to share with others the emotions and experiences of each competitor.

The NewKiteZone’s team (the IKO Kitesurfing Center of Pellaro (Reggio Calabria, Italy) who have organised the event, decided to track athletes in the water with a GPS software, using the high technology of Android smartphones to project the positions and the twists and turns of the race onto the video-wall of the SurfVillage, on the central seafront in Reggio Calabria. To let everyone enjoy the match live and in the comfort on the beaches of the Franco Ciccio Arena.

The International competitors, coming from far and wide with their crews, will offer an extraordinary wind-driven sight, reliving and reviving old rivalries in challenging man’s limits

Kite-surfing and windsurfing are capable of extraordinary speeds, covering the 23kilometers in a lot less time than you would think. The course takes us from Reggio to the shores of Sicily near Tremestieri just south of Messina and back again.
The previous records show it can all be possible in just under 34 minutes!
Driven only by the wind, strong arms and legs... and a big dose of courage, these are
graceful missiles on the water. A following helicopter will show every emotion as the battle rages...

Of all the races in Europe, this is so demanding and spectacular that it unquestionably attracts and involves the audience so much.
Depending on the weather, the sailing / races will be different: kitesurfers against windsurfers, lasers, and majestic Yachts (competing for the first time), will all be under a satellite tracking system allowing public involvement, even when the race is in mid-ocean, so they can cheer their favorite teams and athletes.

There are over 50 competitors this year, once again about fully booked.
Kite surfing is a new entry for the next Olympiad in Rio 2016 so the 2012 race has added significance and during the event the athletes will impress the audience with a series of shows and races, culminating in a photo-contest which will be voted on by on Facebook and an independent jury.

There will be five parties, one each night, where the surfers and board-lovers will find themselves all together in the 5DaysSurfParty in a different location each night.

In short, there are all the ingredients for another successful event that grows every year with bigger audiences, participants, visitors and prestige International sponsors.

All that remains is to say, sailing enthusiasts or not, make it a date from 1st till 5th August and visit Reggio Calabria for one of the most interesting events of the Italian Summer; it promises to be five days of absolute fun.

We wait you next year