Using your kiteboard for wakeboarding

actually just googled "how to wakeboard", some dude with blonde hair, pointed out probably my mistake, keeping the rope grip to side of your hips and body facing to the side, I believe what I was doing use to water skiingis having my two hands on bar out in front of me, causing my back leg to bring the board forward and edging causing me to wipe out. interesting.
Top

I have ridden my TTs behind my Seadoo just to see how it would be and it works, but is not a good ride. Ironically, I have also kited with my Hyperlite Drive 139 wakeboard, and it is great fun for kiting. The only downside is I cannot get upwind on that board. Sliding and turning are a blast on it though. It is rigid and has a 3 stage rocker (flat in the center).

I also ride my kiting surfboard behind the Seadoo. That is great for practicing strapless and jibes. My kids who do not kite actually like playing around on the surfboard as well. I guess it is just different enough to be fun.
Top

You'll have loads of fun once you get used to things....which really shouldn't take long at all.

Kiteboards are just fine for having fun on behind a boat, they're just inferior compared with a wakeboard.

Slow down, relax, 18-20 mph is a much more user friendly speed at the start - it also allows you to do basic 180 slides backwards and forwards without much stress, something you will be very used to from kitesurfing.

And despite what somebody else said, you can ride the board flat forever, just make sure that once you commit to an edge, you stick with it as you cross the wake.

And (again), once you get the basics sorted (which should only take 5-10 minutes behind the boat) you'll quickly want to start to try to clear the wake....and then, don't use a kiteboard, use a wakeboard with bindings (as you have already suggested) and you'll soon find out that this isn't too hard either (especially on a small skidoo wake). Just commit to your edge, make it progressive and straighten out just as you hit the wake.

Have fun, good luck, being on anything (surfboard, wakeboard, kiteboard, donut (!), kneeboard) behind a boat or skidoo, is always good fun!
Top

Your driver should be going just a little faster than you need to plane on the surface, which shouldn't be much with the low rocker and additional surface area of a kiteboard. I'm 160lbs and I've gotten up behind a 10HP aluminum fishing boat before, so you don't need much power at all. Always be turning at least a little bit to avoid catching an edge.

I pulled my son with my 10 HP small fiberglass boat. I could pull him at about 19-20 mph when he was on a Liquid Force Proof 161, but when he tried my shorter North X-Ride I couldn't get him planing. I used the X-Ride behind a larger boat and it was a lot of fun.
Top

Me on my Shinn kiteboard at the cable park. Go have fun out there! 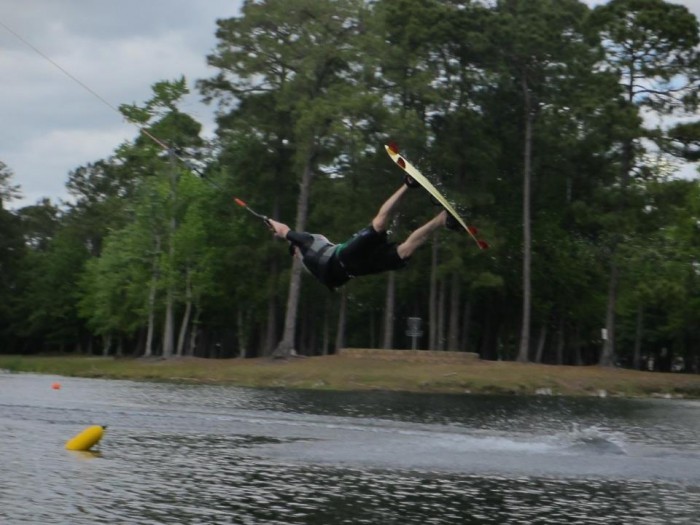 Brand Affiliation: None
Has thanked: 4 times
Been thanked: 48 times

Jantrit wrote:Me on my Shinn kiteboard at the cable park. Go have fun out there!

Jantrit wrote:Me on my Shinn kiteboard at the cable park. Go have fun out there!

2.0 cause that cable looks stupid high.

It was a cablebahn system and if the cable was any longer (less angle) you would end up on the land at the turnaround. Was a lot of fun to play with though. We tried to ride anything and everything we could get our hands on.
Top

I do it all the time. So fun. In my opinion actually performs better then the wakeboard. Throw some Dakine Rapter heal straps on and your golden !!!
Top

TheJoe wrote: Wake boards are made for being pulled behind a boat ski, cable, winch.... ect ect. They have 2.5-3" of rocker and are far stiffer than a flat flexi kite board. If you are really going to spend some time behind motorized pulls then just buy a cheap wakeboard. It will out perform every kite board out there behind a kite.

Friend might have been going to fast all so. Speed should be about 25mph.

25mph behind a boat? That's crazy fast, especially for a beginner! I'm an advanced wakeboarder and prefer it locked in at about 22 if it's glass, and 20 or so if it's choppy. Beginners would have a smaller wake and shorter rope, and should be towed at about 18-20mph. Wakeboards, even with a lot of rocker and big fins, get pretty squirrely at 25mph. I realize that some of the top pros ride 25-27mph with 85' ropes, but us mortals can't handle that stuff.

Re: water starts behind a waverunner....It is MUCH harder than behind a kite, boat, or cable. Waverunners just don't have the low end that a boat does, and then they don't have the lift angle that kites and cables do. The tow rope is almost down at water level, which means it's pulling you straight through the water rather than up and out of it. Imagine trying to water start with a kite unhooked and taking the kite from the edge of the window @ 3 o'clock and then running it just off the surface of the water directly down wind. It puts a ton of stress on your arms/hands compared to all other kinds of riding, and the most common outcome for beginners is for the rope to pull you over your board before it can get planing.
Top
Post Reply
29 posts