As Kiteboard enthusiasts, we are kind of anarchistic and rebelious in nature. We thumb our nose at the pathetic "Normals" in society, living lives of "quiet desperation", feeling lucky to get a night off to go bowling or play poker with the boys. We reject the mainstream society's philosopy which follows the adage: "As a child, we play with childish things, but as adults, we put away our childish toys". In our hearts, we know that the rest of the world looks at our activities, and at us, as we perform the various intricate fiddling manouvers with lines, bars, snaps, balls, boards, straps and rubber clothing, to prepare the needed equipment, ......as, at best, being eccentrics.....and at worst.......candidates for the Darwin Awards or television shows like "Jackass". Your "normal" member of society quietly ridicules us as being "kooky", and pities our parents for having kids who just can't seem to "grow up". Some call it "the Peter Pan Syndrome". We say: "Hey, mainstreamers, go F--K yourself, We're rebels and we don't care what you think!"

Hey, we are rebels aren't we? I mean we think for ourselves, don't we? We don't secumb to fleeting fashion trends, do we?

This is what I concluded from the conversation, along with something I have been noticing for a while now: The "DEATH EDGE" is in vogue this year! The conversation this designer relayed to me between he and the marketing staff of the company went something like this: "This prototype has very sharp edges on it, but I've found that it works a little better with a rounded edge, isn't so dangerous, and doesn't look so outragious. I call it a 'death edge'." The company's response: "Cool, let's leave it in".

Like the old song says: "First we take Manhattan, then we take Berlin"...then we take Tarifa, then we take Cabarette, then we take the Gorge, then we take Maui......then we take the money to the bank. People, work with me, the stuff is flying off the shelves! The suckers are diggin it! They're saying: "Give me that fin with the really sharp edge..its gotta really knife into the water and work better than the dull edged one". "Give me the board with the really sharp edge....it looks like it will really slice in and get me upwind and stick my landings and give me "pop" better than that dull edged one!" No smart retailer is going to argue with his customer when the wallet comes out of the pocket

I am not criticizing the designer for making the items in the first place...nor the marketer for doing his job....nor the retailer for presenting the merchandise to the customer. I think it was Pogo who said: "We have met the enemy and it is us". Hey, are we shooting ourselves in the foot? Like Steve Martin said: "I blame myself".

Here are a couple of links to an example of what I am talking about (go to page 4 on the second one): 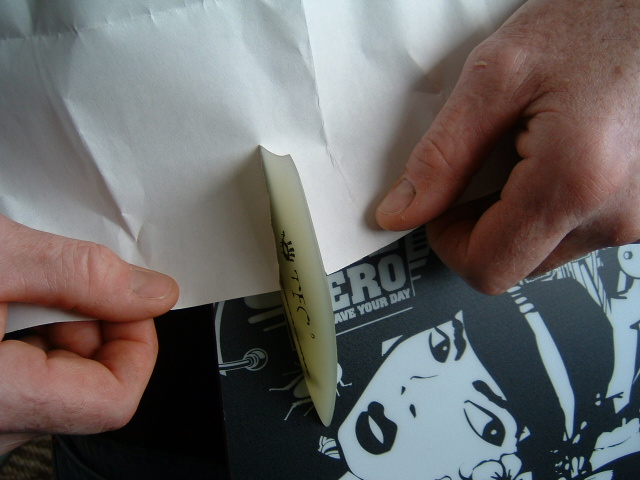 I would argue that this shape would give more laminar flow of the H2O as it leaves the fin, but I would be intrested in what gains are felt by the rider as opposed to a fin whose trailing edge is .001 inch wider.

I would like to hear some theories, also. The best one so far was the "surface piercing foil" one. I heard the "flexitip" one also, but these tips don't flex, just cut. How about the "weed fin" one?

I'm drawing a blank. Is anyone using them to chop lines of that white stuff that kind of makes you sneeze, but in a good way. Maybe drill a hole in one, put it on a gold chain around your neck and go disco clubing. Opps, now we're back into the fashion thing! Sorry.
Top

Hey Tom - the windsurfing industry put out fins too that were deadly (and huge! - kiteboarders be aware when launching on beaches with bottoms up sailboards!). We just sanded off the back edge, and I personally never noticed any performance difference. I do remember a second hand story of a guy in the Gorge getting run over by another windsurfer, and cutting a major artery in his leg - and bleeding to death enroute to the hospital.
Thanks for pointing this out - we don't need razor blades on our missiles! Vote with your feet.
Ken
Top

Re: Danger..Kiteboard Fashionistas at work!

I guess there are still some of those "razor blade" fins out there:

Re: Danger..Kiteboard Fashionistas at work!

You know I haven't seen it, maybe I overlooked it somewhere but you know G10 material can be shaped/sanded. I see people throwing fins out that have dulled or gotten nicks in them when all you have to do is take a Dremel to them. If you want sharp blades, then take an old set and sharpen them, not that hard. I worked with G10 when building RC helis, good stuff. Polo.
Top
Post Reply
6 posts • Page 1 of 1