lucky man!
My Raven's will arrive only at the end of December....
Can't wait to try it!
Is it was proto or production kite?
Tell us more!
Top

It was as far as I knwo a pre production series but couldn't tell from the kite, it was absolutely flawless.

Some others rode it as well and everybody said the same. Easier looping, it has a very nice and steady pull through the loop. Lighter on the bar and it is plain an simply incredibly fast...

Asking the guy who owned it, he said the depower was improved a lot, turning speed and handling and a lot more hang time. Looks very promising.

any chance of getting an update on the new Ravens now that you lucky guys have probably had a chance to try them?

i've been flying a 9m SW06 all summer and wondering if the Raven would perform better in terms of height, hangtime and turning speed. I'm quite happy with the super stable Shockwave (even in 30 knots +) but wondering if the raven would help in boosting heigher, longer and maybe start looping it which I feel the SW may be a little slow at.

i was contemplating getting an 8m, i weight 60 kg, winds of 25 to 32 knots, and usually choppy conditions, no real big waves, any recommendations?

Vilap. I talked to a guy at the beach who just got his. He rode the 12 meter 06 Raven. His comments were that is turned fast, but also that the wind range was super huge, and the kite more stable. He said the kite boost like no other...but I have not tried it myself.

I've used the 10 in about 30knots on both occassions: first the kite feels super smooth - it was squaly when I have used it and it coped really well & only had to use D-de-power once when it got really knarly and it is great to be able to dump the power so effectively when you have to.

In the past I was using a 12m s/w in 30knots plus - but the 10 R3 feels smoother in the air - difficult to describe but the turning, trim & general riding feel in the words of Borat... feel verry niice.

The kite will boost as high as the s/w in normal use and with a bit more time on the kite maybe higher (the s/w depower can result in huge air but not necassarily controlable), whereas the R3 10m is super controllable in the air.... you instinctively know what the kite is doing and it provides far more confidence and super smooth landings even from very high jumps.

The waveriding unhooked is surprising, even though in 30knots I was riding without any depower, so when I went to pull to tack strap right down, I unhooked and there was hardly any power, so mt advise is go easy on trimming for unhooked stuff. Once re-trimmed and un-hooked on the wave, riding was nice, the kite felt positive, sweet turning and as much as I would want. Others will say that brand X is better for this that & other, but overall the R3 ticks the boxes.

The tack-strap works incredibly well to depower, but when powering up be warned that it will go to full power immediately & as yet I havent found a way to release the tack strap pogressively. When the tack strap is put from full depower to full power the big adjustment to the trim can almost drop the kite out of the sky - but this was in gusty conditions.

The D-de-power works well for safety and gives you more confidence - just remember the kite has a huge depower on the tack-strap and to use the D-de-power you have to stretch out a bit to engage it. But, its such a safe system, it is worth having when things get too much.

The QRL/chicken loop line feels too long by 2 inches or so, but Ive been told that altering the length involves an adjustment to the D-de-power, so for the time being I'm going to leave it and get used to the kite as it is.

Again overall, super smooth, powerful (somewhere between an X4 & Raven 1), depower of an X3, but low end grunt/get you going of an X2, with turning off the scale and more like a Torch. So I think they got it right

Russian...once you get a feel for the 12, please do a write up. I am looking for something to take me higher than anything else, but also be useful for looping and freestyle.

Russian... thanks a lot for reviewing/comparing with ShockWave, really makes me want to get the Raven now!

Anybody out there get a chance to try the 8 or 9 meter?

What color combinations do you have? Pictures please! 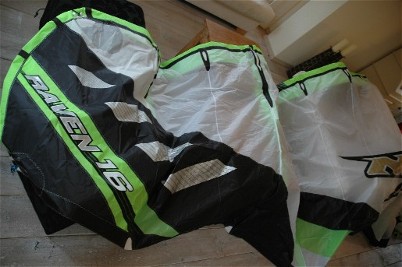 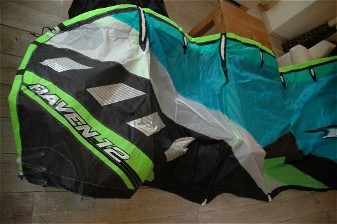