I would like to see what kind of engineering talent Burton has working on their project. The sporting goods industry typically does not pay engineers very well. And they like to recruit designers from the ranks of pro riders rather than from top flight engineering schools. For a qualified engineer, the money is much much better in other industries. I've met and trained a lot of engineers and there simply aren't that many who have the CAD skills to shape a board. And once you develop those skills you would be in much higher demand at Harley Davidson, Nike, some other consumer products powerhouse or better yet an Aerospace company. As the lone engineer working with shapers and pros it would be very easy to have your ideas run over by the traditional paradigms of the surf industry. And you would be trying to bring in concepts that might be quite foreign to them. There would be some interesting design review meetings to be sure.

I guess what I am saying with all this typing is this The whole process starts with a good 3D model and someone who can manipulate it in any way imaginable. Any down stream analysis will need to be loaded back into the model as improvements. Some could be quite subtle or even mathematically driven. An accurate 3D representation is at the center of it all. It ends up being the repository for the cumulative knowledge of the entire program. Do a backup.

3D modeling is the language of design no matter what industry. As an engineer or designer you must master a high end CAD tool. Just as the traditional hand shaper has mastered his tools.

I've had some young engineers contact me over the last couple of days. Thank you. I am happy to share my experience with you and help you with your projects. Please feel free to stop by if you are in the Gorge. I'll be happy to show you around my little shop and fill your ear with my passion.

Hein - I may take you up and come in for a visit to poke around your shop this summer.

You are obsolutely right about the realities of the lack of compensation in the sports industries for engineers (one of the reasons I gave up on it). There are a few guys out there that have taken the lifestyle-over-career approach, but they are few and far between... and I also wonder as to their skills sometimes. Plus - I dont know if working in these industries as an engineer is even a better lifestyle choice. I use to work in the industry but got out of it - I now ride way better waves in far cooler places, as well as having a great job which will let me do that for years to come.

That being said, I think there are some good young engineers without families to feed yet that may have some skills and enthusiasm, as well as a passion for surf sports, in order to make these kinds of projects a reality. They may be lacking in experience in both engineering and the boards world, but sometimes that can lead to fresh ideas. It would be great if they paired up well with companies like burton and some more experienced engineers.

Anyways Hein, I know you're not looking for a job, but maybe for the greater good you should solicite your talents to Burton and the likes. Who knows - it may be an interesting project.

I think the Burton project as a whole could go either way. I think at the least that there will be some good knowledge and collective experience that comes out of it.
Top

Hein, your approach is very good. I have no idea who the engineers are at Burton/Merrick etc. I assume they have enough money/desire/brains to hire real talent. Time will tell if they hired a Hein or an ex mid level pro surfer who took algebra.

Magic boards are an individual thing although they usually have pretty broad appeal to riders of similar size.

One big advantage Hein and I have over most is that we actually kite. I would not be able to interpret the input I get from riders if I didn't ride myself and switch boards with them out in the water. It's really important to surf the boards too but unless you understand firsthand what the feeling of the kite adds and the way it changes what you need to do you will be at a huge disadvantage shaping kitesurfboards.

El Nino, here is the 6'6" fresh out of the bag 1.7 lb fused eps core with double 4 oz S bottom, triple four ounce S deck, 1/4" herex power panels with 7781 under them (for comparison a similar size surftech has 1/8" divinicell with one 2 oz under and one 2oz over so my board will have ten times the strength in critical impact areas but less ding resistance in unprotected areas for about the same finish weight)Current weight is a respectable (for the volume of board with two stringers) 5lb. 14 oz. Probably finish out at 6 1/2 lb if I'm careful. 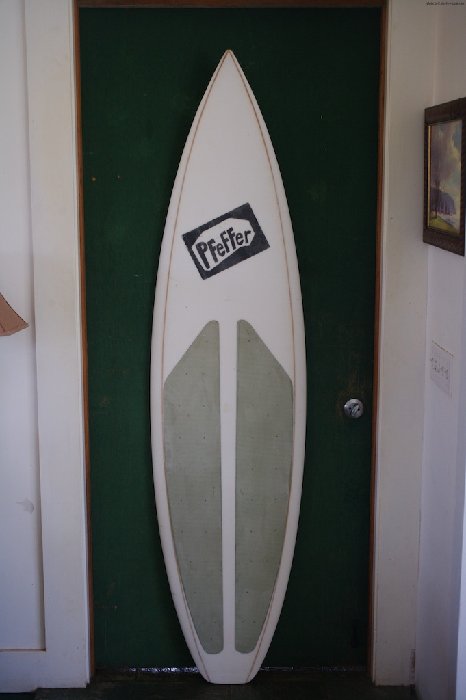 sweet. how much?
haha... no, not buying now - but I may look you up when I'm on Oahu (I've never been - surprising considering how often I'm on Maui).

So what are you going to do with fins on that board? gonna go with the quad thing?

I'd love to hear how that one rides... especially from a bigger dude in lighter winds and/or softer waves.
Top

I really like how it turned out. Nice touch for you to set it up against a door for size reference. It's so hard to get a feel for the size from a picture otherwise. You really ought to try one with the butterfly patch and see how that effects the flex. It didn't seem to take you long to complete this one. Nice engineering with the laminate too. Stiff glass under a healthy skin does sound like it makes a lot of sense. -Hein
Top

hein wrote: Simon, I hope you find a board to your liking. I only weigh 155 and I am sure I can travel with a 2 board 2 kite quiver (not counting a wake skate) comprised of at 133 flip tip twin tip, that 6-0 surfboard I posted and two generators 5.5 and 7.5. My twin tip is all carbon and super light so I pack it to protect the bottom of my surfboard. It's easy to just slide it in the other compartment of a double surfboard bag. I'm working on a travel sized electric pump since those hand pumps are so bulky. I have a wheeled box type bag for my kites, harness, clothing and all that.
-Hein

Hein, can you provide a bit more on the wakeskate you use?? 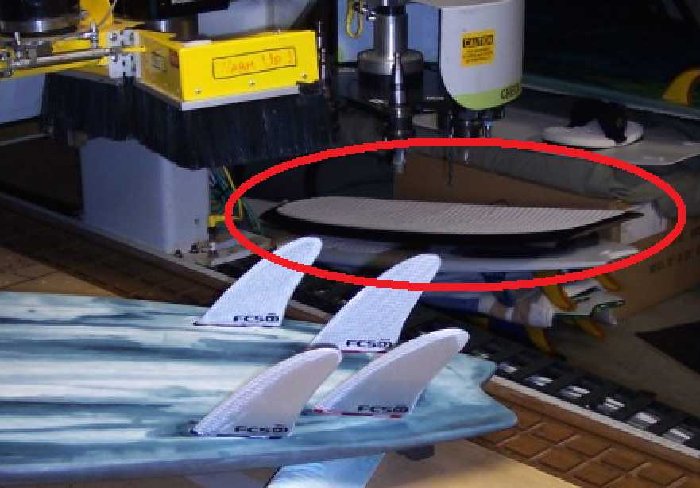 Keen eye. I built one prototype at the end of last summer, rode it, made some adjustments in the outline and have since built 3 more. A friend took one down to Brazil and had a ton of fun with it. Said he rode it on the dunes. I gave the first prototype to a local to try. He is pretty good with a skim board but it's winter and he's busy learning about avalanches so not sure he's ridden it. The latest ones are much better. Funny how some little tweaks can make all the difference.

I'm not sure if I should say this but Surftech expressed a faint interest in building it for the masses. It took me a while to finish a prototype for them so maybe the timing has changed. Or Corey just wanted one to ride with behind his boat.

. I suppose if you wanted to see it made then you could call and ask about it. I'm not pushing it. And if someone else wants to bang them out then let me know.

My daughter and I have had a lot of fun with it behind a jet ski. It's easy to ride at a slower speed than your typical wake skate. That makes it fun for older, bigger or beginner riders and also makes it better with a kite. I was doing surface passes and riding blind in no time behind the ski. And transferring that to the kite was really easy. Too bad I can't flat water ollie for shit. It's got plenty of kick in the rocker so I must just suck. I've taken both versions out in the shore break and had a blast. Just got to watch out that I don't buzz the tourists with my kite. Looping a 5.5 generator over the beach can be startling. -Hein
Top

Hein just curious do you do any FEA analysis on your boards.
Top

No FEA. I think it's better suited for homogeneous materials. I remember the analysis guys struggling with welds due to the heat effected zone when I was designing construction equipment. I think they got if figured out though. I had a demo once of a composites analysis package that was integrated into Pro/E. I think it was FiberSim. I sent the application engineers a kiteboard model and they defined the laminate and did some basic loads. That's where the difficulty was - defining loads. They did do some cool animated colored deflection output. That always impresses the engineering manager. -Hein
Top

Yea got to love animated von Misses stresses, I guess some one would have to define those boundary conditions fully and with the variability that exists it compounds the problem further. Also as you've said defining the loads is fairly difficult. I'm not a big fan of Pro/E mechaninca myself much prefer kiteforum.com, but it has its quirks also. The question is if sporting industry wants to invest heavily in R/D, where as they are already making profits. I guess if competitors were to arise that began to push the envelope of what is acceptable ( in terms of R/D).
Top
Post Reply
119 posts