For those of you who do not know, driving on the outer banks may soon come to an end. This Friday, April 4th 2008, there will be a vote allowing or not allowing ORV access on the outer banks beaches. How does this affect you? Well first off Hatteras is known as one of the best places in the world to kiteboard, the strong consistent winds, waist deep water as far as the eye can see, great waves on the ocean side and the warm weather conditions make this place a kiters dream. While the rest of the North America is in a deep freeze the outer banks has been warm and windy, 70 degrees and 25 mph almost every day this month. Here is a link that I found from one of the local kite shops about the wind and weather that we experience, http://www.realkiteboarding.com/index.c ... em&id=1416" onclick="window.open(this.href);return false;
Granted their will still be more than enough space to kite and more than enough warm weather and water for thousands of kiters many unique launch locations will not be accessible. I would like to hear your opinion on this matter and would suggest that if you have never been kiting in Cape Hatteras you should make the trip the wind and weather is something that has to be experienced first hand. Help save our beaches, come ride in Cape Hatteras and show your support!
Top

hatteras is absolutely AWESOME!!! been there a couple of times and it is just a mecca, so many perfect spots. prob gonna be there this friday for that southwest action. Please dont let them ban driving on beaches, it will make it so much more crowded in small areas...
Top

its about time, clear some of the lazy arses off the beach.
hike your stuff in, it wont kill ya.
Top

You've probably never been there or you would understand how this would kill the local economy. It's not a good thing!
Top

yes, ive been there a bit. haha.
the "local" economy was killed years ago, most of it is owned by non-locals.
hatteras will survive.
Top

I don't think anyone is going to be hiking into the Cove. That is at least 2 miles from the Lighthouse parking lot and if they ban driving on an empty beach they are hardly going to allow people to walk over sand dunes past the nesting birds.

Here is a link to an article about the subject that's worth reading.

Gonna need to build yourself a beach bike. Here's one I made for baja. Welded three rims together, etc. 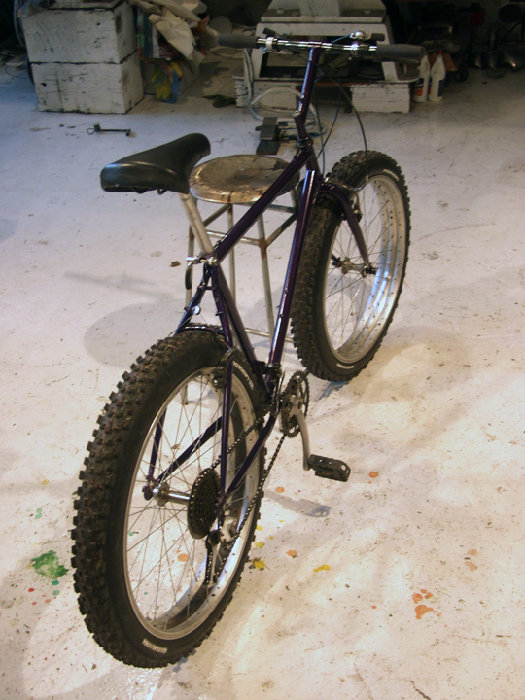 There was rumor that someone was asking the council to ban cars from one beach here, at a meeting recently there were soooo many angry people (all regular beach users) that turned, up that the chance of the council even mentioning it again is about 0.
Top

On Friday, April 4th, 2008, a hearing is scheduled in Federal Court in Raleigh North Carolina that could result in partial or even complete closure of the beaches of Cape Hatteras National Seashore Recreational Area to four-wheel drive use.

History of the Cape Hatteras National Recreational Seashore
When Congress created the Cape Hatteras National Seashore Recreational Area in 1953, only sand roads connected the villages of Hatteras Island. Beach driving was and has always been a way of life here. At that time, land owned by many local residents was transferred to the Federal Government to be a part of the designated National Seashore. In the negotiations for this land, the United States Government promised the residents of Nags Head and Hatteras and Ocracoke Islands who gave up their land, that traditional access, such as beach driving, would be honored.

Hatteras Island does not have conventional beach accesses such as boardwalks and numerous large beach parking lots with easy paths to flat beaches. Our beaches are vast, remote and protected by sand dunes. We have designated ramps for four-wheel drive access. Beach driving is essential to accessing many of our beaches, especially for people who are elderly, handicapped or have small children who cannot walk three miles in thick sand to see the famous Diamond Shoals at Cape Point or see Oregon, Hatteras and Ocracoke Inlets.

It is important to note also, that to clearly differentiate land as a wildlife refuge and land as recreational use area, Congress designated Cape Hatteras National Seashore as a Recreational Area. The clearly stated intent of Congress was to provide locals and vacationers an area to enjoy diverse beach activities such as camping, surf fishing, boating, kite boarding, surfing, beachcombing, etc.

Facts
As explained in our last newsletter for March, on February 20th 2008, special interest environmental groups now want the government to break that promise and ban beach driving. They have asked for an injunction to stop beach driving until a lawsuit challenging the National Park Service and the legality of traditional beach driving on Cape Hatteras National Seashore is settled.

Additionally, they want to usurp traditional recreational land, such as Cape Point, and designate it as wildlife refuge, restricting human access to the most famous surf-fishing spot on the East Coast. Already, over 85% of our island is protected by law against further development, so that the natural habitat may continue to flourish.

Extreme environmentalists claim that a prohibition of beach driving will "save" the piping plover, which have been spotted infrequently on Cape Hatteras. In fact, from 1902 - 1960, no piping plover nests were ever spotted on Cape Hatteras. Since 1901, there have never been more than fifteen breeding pairs of piping plovers, ever, at one time, on the island. An abundance of feral cats, gulls, fox, and Mother Nature in the form of high storm and lunar tides, have resulted in unsuccessful nesting. In fact the least successful nesting area on our Seashore is Portsmouth Island â€“ where no private four-wheel drive is allowed!

Although the National Park Service does not have a formal beach driving management plan, they have an interim plan, and are developing a long-term plan so that a balance between recreational use and wildlife protection is upheld. Local residents, business owners, government representatives, sports enthusiasts, and also environmentalists have all been working with them to ensure that all interests are represented in the plan-making process. This is a federally commissioned group to ensure that a democratic process prevails and that recreational use and wildlife protection can exist in harmony.

Unfortunately, extreme environmentalists have chosen to bypass the agreed upon democratic process, and now seek drastic action that will significantly and detrimentally impact local communities, vacationing families and create economic havoc with our local economy.

Even if you do not have strong feelings on the issue of beach driving, please take the time to consider that the majority of our (your) guests rely on four wheel drives to access their favorite beaches at Nags Head's Oregon Inlet and on Hatteras and Ocracoke Islands. If they canâ€™t get to the beach, then they will not vacation on Hatteras Island. Furthermore, as we learned at the public meeting last week, the same protective species protocols that are called for in the injunction could also be used in other areas of the seashore currently off-limits to beach driving.

For example, if a nest of any of the named species were to be discovered on the beach in front of Kinnakeet Shores, Hatteras By the Sea Subdivision, etc â€¦.. the area would be immediately shut down in a 1000M radius (over one-half mile) to all access, including pedestrian access. That means a guest renting a home on the oceanfront could not walk to the beach in front of their home. We already have guests who have told our reservations staff that they are delaying booking until they know the outcome of this issue.

This issue is not just a Nags Head / Hatteras / Ocracoke concern. The impacts of this injunction will be far-reaching! Dare County officials have estimated that there will be an $8 million annual loss in tax revenues if the injunction is approved. The cost to vacation cottage owners in rental income, OBX businesses in decreased revenues, decreased property values, and to the income of those who rely on tourism for their paycheck will add up to many, many millions of dollars. Can you imagine the Outer Banks without access to the most popular beaches?

Please, if you share our concerns, call your home states federally elected representative (find here: http://www.visi.com/juan/congress/" onclick="window.open(this.href);return false; ) and ask them to do the following:

Explain the issue. Your National Seashore access is being altered without the benefit of the democratic process; the enabling legislation is being violated.

Ask your legislators to place a call to the appropriate official at the US Department of Justice and ask why you, as a private citizen, are being punished for the United States Park Service not doing their job by creating the Off Road Vehicle Plan required by federal Law.

Ask your elected representative to defend the Recreational aspect of the enabling legislation that created the seashore.

*Keep in mind that time is of the essence in this matter, we have only 4 days to be heard. Phone calls and faxes are the best way to contact in order to assure that your voice is heard.

Please feel free to copy and paste from any of the following postings on the issue.


Hatteras Realty's Position:
Hatteras Realty supports strict enforcement of responsible beach driving and protecting the bird and turtle nesting areas. We do, however, object strongly that legislation that created Cape Hatteras National Seashore Recreational Area, the Nations first National Seashore, may be violated without benefit of democratic process with the granting of this injunction. We love our fiercely beautiful seashore and we believe in the principles of democracy. Our National Seashores should be managed by the official stewards, which include the US Department of the Interior through the National Park Service and the US Fish and Wildlife Agency, not through Federal Court.

The Seashore was established in order to preserve a natural beach area for future generations so that all people, rich or poor, would have access to a seaside recreational area. It is important to note that the Seashore, in its enabling legislation, was established as Cape Hatteras National Seashore Recreational Area, not as a wildlife refuge. This distinction was in recognition of the intent of Congress that the area would be multi-use; allowing such activities as camping, surf fishing, boating, kiteboarding, surfing, beachcombing, etc. Beach driving was a recognized factor in planning the Seashore. Promises were made, by the United States government that assured those giving land that traditional accesses would be honored.

The response now from the environmentalists is that "things and situations change". We do not agree that promises made in order to obtain ancestral lands can be altered. We do not believe that honor and integrity "change." The "evidence" as presented by the environmentalists to "save" the piping plover is nebulous at best. See October 1952 "Open Letter to the people of the Outer Banks from National Park Service Director, Conrad Wirth here:

This issue has taken up all most all of my time and resources for the past month. I fear that the Judge will shut down beach driving and then we will have to fight the injunction in Federal court. The future may become very dark before it gets better.

Please take the time to visit the websites, become informed and contact your representatives to give your views on this very important issue!