so, poor babies, no more driving to your favorite launch. christ, are you soft or what?

anybody with a letter for a first name writing under a realtor's letterhead has never kited-wtf is he doing on this forum?

hatteras may be heaven for kiters but it is also an ecological nightmare, and driving on the beach is part of a lifestyle that was fueled by $1 gas, and has spawned 100 mile commutes, hummers and other toys for men with small penises, as well as epidemic levels of obesity and diabetes and hypertension.

you think global warming and your frickin driving habits and your growing waistline and shrinking dick are not all married up just below the surface?

pretty jagged maybe but christ, what does it take to get your attention.

wake up and smell the coffee. . .
Top

This issue is not about fossil fuels, but I realize some of you can't resist the chance to step up on that soap box. The reply by Disco D spells it all out so you know what the real issue is. You should read it.

It also has nothing to do with laziness. It is physically not practical to hike out to many of those beaches to kite. In any case, some of the items discussed involve closing beaches to foot traffic as well. That means if you did hike out for your downwinder and had a breakdown, you could not walk the beach to get to a "public" area. This has already happened to kiters there with smaller closure areas. (being fined for walking up the beach after a wreck).

So, I'd get off your soapbox and skip the name calling and realize that we're all kiters, and to us, this is about access to a fantastic spot to kite. Don't muddy the waters with your other agendas. Keep that for your own local beaches, let the people of Hatteras manage theirs.

Screw the piping plovers! Who wants a bunch of drunk 4x4 rednecks racing around kite beach? Driving over your lines? Parking over every available landing spot?

Beach driving does not further kiteboarding's cause IMO. The picture of the beach packed with 4x4's and fishing poles says it all really. Who wants to lauch amongst a ton of cars on the beach and wrestle with a bunch of angry fishermen who believe you are scaring the fish.

The argument that this ruling will hurt families is even worse! Little kids playing on the beach amongst 4x4's racing around is a NIGHTMARE. We have some drive on beaches here and I will not take my kids there for the sake of the few assholes who wand to drive 40 mph within a few feet of my kids building sandcastles.

IMO a model national seashore is Pensacola Beach, where there is a road, beach driving is prohibited, and there is a beach access every mile or so. Therefore, anybody can go to the beach, and if you are willing to walk a little further than your average American you can have some space which is what kiteboarding needs.

If access is limited crowds will be smaller and that will be better both for kiteboarders and the families who want to enjoy the beach.
Top

toddjb123 wrote:Don't muddy the waters with your other agendas. Keep that for your own local beaches, let the people of Hatteras manage theirs.

The original posters have now expanded this beyond a local issue. Its not unreasonable to give reasons not to send international support IMO. Plus do you really want a bunch of international kiteboarders writing in demanding beach access rights? It might not help the local cause at all really.
Top

^^Well said Todd.
But.
There does need to be some restriction.
Not an injunction that may close beaches for years, but really, if they want to keep trucks off the spit or from driving over the sand a long way between ramps, during nesting, that is pretty reasonable.
But the nesting/fledging takes a month or so, not all year or the duration of a federal lawsuit.
So there should be proportionality.

Jake: You have been for the most part taken in by a ruse!
That picture of all the trucks at the inlet is gross. But on the other side of the inlet, no trucks! Picture doesn't show that....
It is just not representative, but put up for shock value. Normally you see no vehicles most places, or maybe 1 or 2 spread over a few miles. That inlet is the only place in 50 miles that gets like that.

Anyway, here's the varmint in question, best luck to its survival: 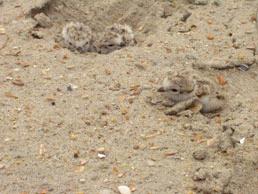 Hey, instead of fighting for 4x4 access to bird nesting areas in a Federal Nature Preserve, why don't you guys start fighting the "Richie Riches" for access everywhere else? All the rich real estate developers have sold every square inch of the Banks' coastline. All these huge, 4 story houses blocking all the rest of the coastline from public use and not a single parking spot for miles. The beach, after all, belongs to everyone (supposedly) but the rich property owners (who only vacation and spend weekends on the Banks) will never let you access it (and certainly not for free). Why isn't anyone yelling and screaming about that?

Here, to the south of Hatteras, the Richies have managed to get a "moratorium" on wind mills and wind generators. Yup, that's right, as oil prices soar and our dependence on it continues at a record pace, the Richies have put the single most successful form of alternative energy on "hold" because they are afraid that it will spoil that million dollar view from their mansion on stilts.

What a hypocritical lot we are. You hear people talking about "going green" and "saving the environment", but only so long as it doesn't require us to make any sacrifices that might inconvenience us.
Top

Hey, instead of fighting for 4x4 access to bird nesting areas in a Federal Nature Preserve, why don't you guys start fighting the "Richie Riches" for access everywhere else?

YES! YES! YES! I couldn't agree more completely. All the handicapped grammas with average means who want to go to the beach shouldn't have to climb into their 4x4 and roll on out into the wilderness just to work on their sunburn.

BWD: Our drive on beach looks like the referenced picture near the access points, then it thins out as you describe. However as the cars get spaced farther apart, the teenagers with their life size TONKA trucks demonstrate much less restraint with the throttle. You think they can see or care even about your kite or fishing lines or your children? My opinion as a surgeon who takes facial trauma call is that the risk in traction kiting pales in comparason to motor vehicle use of all sorts. Kitesurfing will never be as "extreme" as something so simple as the evening commute. Allowing motor vehicles to use a recreational area as a race track is criminal in my opinion.

BWD wrote:
Jake: You have been for the most part taken in by a ruse!
That picture of all the trucks at the inlet is gross. But on the other side of the inlet, no trucks! Picture doesn't show that....
It is just not representative, but put up for shock value. Normally you see no vehicles most places, or maybe 1 or 2 spread over a few miles. That inlet is the only place in 50 miles that gets like that.

dont think he has been "taken in by a ruse", that looks like cape point on almost any weekend, its just gotten out of control. crazy.

and there is way more than 1or 2 spread over a few miles. you know it.
Top

Jake, there is room for all types of beach activities down there. There are plenty of non-4x4 beaches to hit for people who want that, there are places that are better for fishing or better for kiting. I actually rarely cross paths with the fisherman and the picture you see is not typical as BWD noted. Those are cars crammed around one point. Everywhere else things are much more spread out AND on a windy day, most of the beach goers are not there. For whatever reason, it always seems to work out that everyone has room for the activity of choice (surf, fish, windsurf, sunbathe, kite, whatever) and its rare that people butt heads. The fisherman will congest around a good point or trough, and that's fine. Keeps all the hooks in one area.

I'm not familiar with that argument you're throwing up about speeding drivers running over your kite lines and your kids. I just don't see that out there. Yeah, every once in a while somebody goes by too fast but the people seem more considerate, there is a low speed limit, and the police monitor it. I don't want my right to park on the sand taken away because another guy is driving too fast. If that becomes a common hazard in OBX than it can be addressed. Right now its just an invalid argument you're lobbing from Texas. It doesn't make sense. If I feel my kids are at risk to get hit by a car (I don't) I or anyone else can go to one of the many other beach areas where cars are not allowed. As I said above, it really is pretty simple and the current configuration handles whatever kind of access you need.

BWD, some compromise in there makes a lot of sense. I agree. The periodic closures they have now are only an inconvenience and don't block much access. Heck, if they just made it a sailing only beach there'd be a lot more room for the birds.

Asking for petition signatures form non-locals is a valid request. Tourists travel to OBX for that beach access, so it is important to demonstrate the impact that could be felt on tourism.
Top

You guys should be super careful about legislation protecting the plover. Sands beach in santa barbara has a large plover population and if you try and launch your kite there the granola freaks go ape shit. I had one guy try and grab my kite when I was self launching on a low tide day below the high tide line, screaming it was a private beach. After I told him that all property below the mean high tide line was public property he realy went nuts. I don't know what it is about this bird....but a dredded up hippie sitting in a beach chair protecting the 3/4 roped off beach is what you are looking at. FYI ....
Top
Post Reply
104 posts