Top competitors, warm weather, and strong winds provided the fuel needed to super charge the revamped 2008 Gorge Games. The Gorge Games will be featured on Fox Sports nightly from August 18th â€“ 22nd and are part of a 3 year TV contract that will surely draw large audiences from board heads everywhere.

The Kite boarding division drew a very large and talented field from around the world. Top Freestyle and Course Racers were riding hard to win their share of $10,000 prize purse.

Day 1 started off with Freestyle with PKRA style judging that rewarded riders for high powered very technical maneuvers. As the heats progressed it was clear to see that top PKRA guys like Madison Van Heurch and Alvaro Onieva would be vying for titles. Not be outdone or over looked, top North American rider, Cabrinhaâ€™s Damien Leroy had his own plans for the podium. Additionally, upstart phenom from southern California Jon Van Malsen wasnâ€™t afraid of the international riders either. In 6 to 8 meter conditions, Damien and Jon rose through the ranks. In a very controversial semi final heat between Leroy and Onieva, Onieva took the heat and advanced to the finals to meet Van Malsen, while â€œDamoâ€ was relegated to the loserâ€™s finals against a very talented strapless rider named Joey Pasquali. While Alvaro handily disposed of Van Malsen, Damien had a close heat with Pasquali, but the difference in riding style between the strapless Joey P. and twin tipping Leroy tilted the scale in favor of the powered style of Leroy. While Leroyâ€™s sights were clearly on the top podium spot, placing 3rd in freestyle against some of the best PKRA riders in the world tasted sweet. â€œIâ€™m just glad to be walking away from this in one piece. Arriving here (at the Gorge) 4 days ago, I couldnâ€™t have told you that I was even going to compete in freestyle. Iâ€™ve been working pretty hard on my racing and my freestyle has suffered a bit. A day or two ago, things started to click and my freestyle was back on, so I entered. Iâ€™m very happy with my 3rd place in this disciplineâ€, Leroy said after the Freestyle awards.

The womenâ€™s freestyle was hotly contested and featured Cabrinhaâ€™s Clarissa Hempel and Melissa Gil in the winnerâ€™s finals and losers finals respectively. In the end, Clarissaâ€™s full powered consistency overcame a strong charge from Gorge local Tonia Farmen to take the 2008 title, while Gil finished an impressive 3rd.

After the Freestyle final, the grumbling on the beach was that the PKRA format was less than spectacular with the low level, technical tricks. Most of the industry members and spectators seemed to prefer watching the course racing and free riders doing â€œbig airâ€. Thankfully the organizers recognized these trends before the event and this year featured a â€œbig airâ€ event where by riders were judged 70% on height and 30% on technicality. As the first heat kicked off, the beach energized and loud cheers from the crowd roared up and down the river. There were spectacular mega loops, super high sent passes, and even a few board-offs. Once again it was Leroy taking over, but this time it wasnâ€™t just Damien, it was also his brother Ray Leroy. Ray seemed to go bigger than everyone and put together the best big air heat of the contest, but somehow his heat against Onieva was re-run and Onieva advanced again. While it was not to be a Leroy / Leroy final, Damien had the chance to avenge his controversial loss to Onieva in the semis of freestyle and take him on in the finals of Big Air. Recognizing that it was not enough to simply beat the PKRAâ€™s number 3 to advance, Damo pulled out all of the stops and pounded the violent winds of Hood River into submission launching huge handle passes, kite loops, and even a few board-offs. At the horn, there was no question as to who the winner was and Damien headed to the beach fully pumped and was mobbed by fans and television crews.

For most of the riders the show was over, but the second day of course racing was just beginning minutes after the finals of the Big Air. The Cabrinha Team has been putting a strong effort into their race program and the results have showed with Damien and Clarissa winning nearly every racing event this year, including the recent US Nationals in San Francisco. The kites are obviously the fastest around the course, but could Damoâ€™s legs hold out to make the podium in his 3rd discipline in as many days? Strong winds met the racers on the final day of the event. Winds gusting to well over 30 knots at times required riders to use kites between 6 and 9 meters. Going into the second day of racing it was a tight race between the Cabrinha and North teams. Damien and Sky Solbach were locked in a very close battle for first place while Northâ€™s Ken Winner was battling Cabrinha racers John Modica and Kent Marinkovic. With 43 racers on the line, anything could happen. Damo, John, and Kent opted for a risky port tack start on the first race while the North guys lined it up on Starboard. Super tight crossings and heated conversations prevailed but in the end, Sky Solbach was able to finally top Leroy to take the top spot for Course Racing while Ken Winner, John Modica, and Kent Marinkovic rounded out the top 5.

Clarissa Hempel easily out distanced all women in the course racing and was followed by another Cabrinha rider Melissa Gil, both solidifying their positions as the nationâ€™s top female racers.

To see all of the action for yourself, tune into Fox Sports August 18-22. 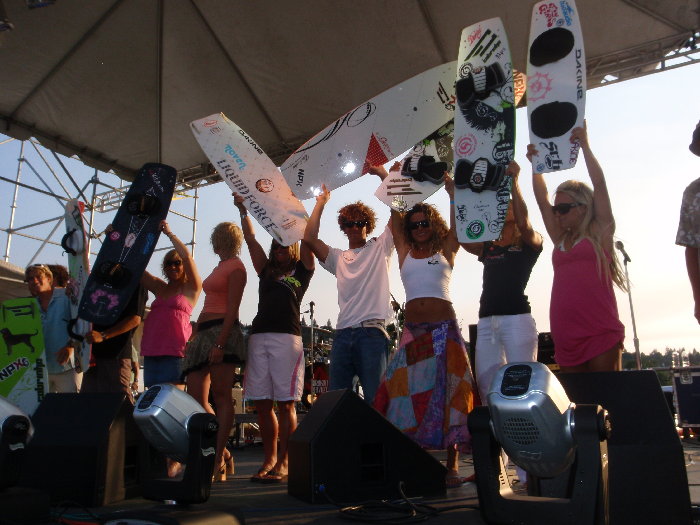 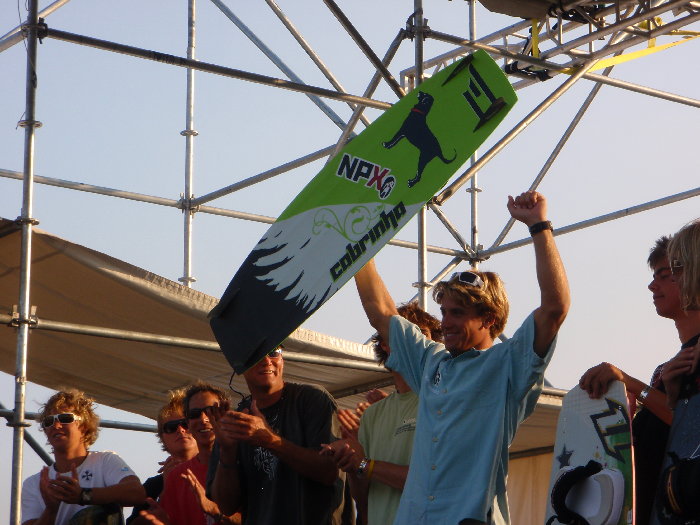 What I think is really cool:

If you don't know him: he was one of the first kitesurfers in the world, if not the first?
Top

Corey is also a Gorge original. What type of kite was he flying? He used to design for Gaastra.
Ken
Top