dunno if someone already posted:

a 33 year old died after hitting a building ( another surfer is in critical condition )
the first accident involved a man hitting a building while the second one hit a car and was lifted by helicopter to the nearest hospital. Both accidents happened in the same place.
Top

Apparently this was caused by a gust (tromba d'aria)

The Italian text also states that the injured kiter is severe.... Airlifting an injured person in Italy means it was very severe and most probably needed to transported to a special facility.
Italy has hospitals all over the place... choppers are only called in when really necessary.

I widh him the best of luck. Luckily he is in Italy with a national health care system.
They do whatever it takes....

With no disrespect to the victims and without the intention of saying "I told you so"..
Please all read my thread on SRR (Safety Release Reflex) and ask yourself when was the last time you practiced and tested your safety release.

Be safe, have fun again and again!
Top

Real bad news, my sympathy goes out to the lost kiters family and friends. As visible as waterspouts are, kiters still fall victim to them at times. In the case of "fair weather" waterspouts the sun and partial cloudiness might take them in. A kiter was killed by one of these in Italy with another coming close to it. 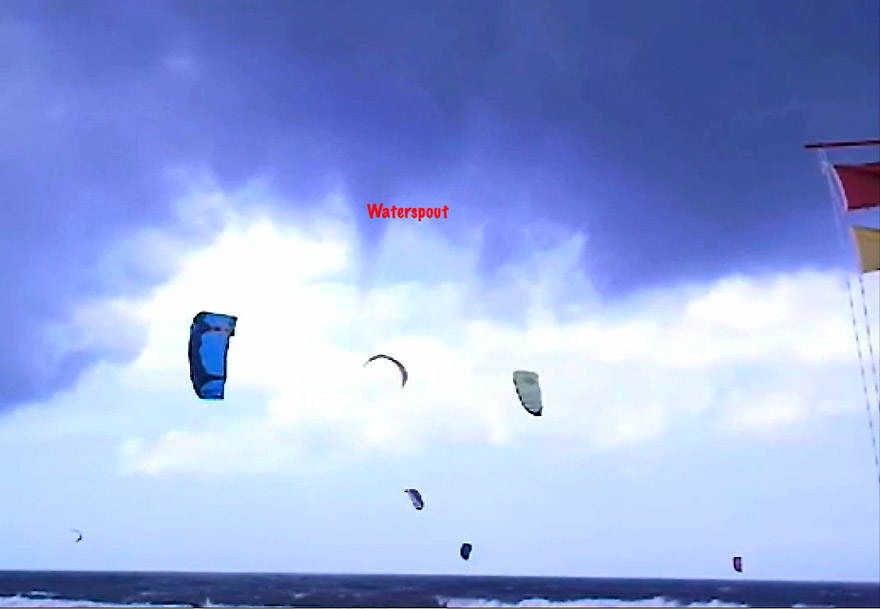 A waterspout in Cerveteri, Italy on 6.20.09. Three kiters were lofted almost simultaneously with one fataly striking a building, another hitting a car and the third was able to emergency depower while on the beach.

"Real bad news, my sympathy goes out to the lost kiters family and friends. Best wishes for the full recovery of the other rider who was lofted at the same time. It looks like a third kiter was lofted but didn't suffer serious injury.

ROME (June 20) - They were doing kite-surf near the center of Ocean Surf Margherite the way to Campo di Mare (Cerveteri) when, at about 13.30, he caught a tornado making him take a flight of several meters . A man of 33 years originally from Cerveteri, living in Treviso and kitesurf instructor, was banged on the roof of a building of the promenade of Via delle Margherite and fall to the ground, ended against a railing of iron shot on the dying.

Another surfer, thirty, is over against the car passavno currently showing several fractures for which he has been admitted to the Gemelli Polyclinic, where he was transported to eliambulanza. Despite the prognosis confidential, is not in danger of life. More lucky the third, fallen on a stretch of beach: if you got with no serious injuries.

The swimmers who have witnessed the incident told the fire brigade intervened to have seen a whirlwind of air and the surfer, then dead, then a flight of 30-40 meters.

Looking at the satellite loop, it looks like a frontal boundary passed over the area of Italy around midday."
viewtopic.php?f=1&t=2357684 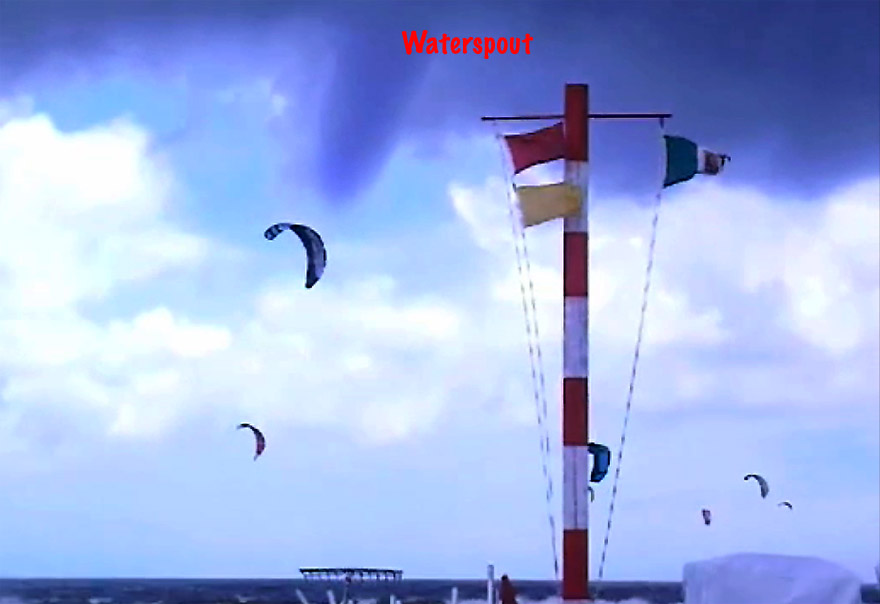 We have also had a kiter permanently paralyzed by yet another waterspout. All were blown horizontally with substantial force at speed. Waterspouts have sunk boats and played havoc with things at sea since we've been out there. I would avoid them like the plague.

Waterspout wind field. Checkout the horizontal outflow component and the undefined vertical component by the shaft. Winds plenty strong enough to mess up a kiter.

There are fair weather waterspouts, such as frequent the Florida Keys and Great Lakes. These generate winds on the order of less than 60 mph to around 100 mph, perhaps more. These are associated with cummulous clouds. Then there are tornadic waterspouts connected to supercell cummulonimbus storm clouds. The super cell can throw out lethal winds all by itself without any input from the waterspout. This is a far more common scenario where kiters are concerned. Tornadic waterspouts can develop into as high as F5 tornados on land although rarely. An F1 twister is plenty enough to kill you though if you have a kite up, regardless of kite orientation.

Here is a video of a waterspout that went ashore in Australia and turned into a tornado in short order. Checkout the debris field, anyone up for flying a kite through this?

They even mention it on a German TV news channel.
Top

So, how many died in the last 2 weeks?
Sorry to hear. Sad more so.
I thought the new kite gear is safer?
Pretty sure the companies have to re think their QR and depower.

But mainly it's the riders fault.

My condolences to their families and friends. Same goes for the Vegas dude.
Top

Very sad news, reported in all News on TV. all the kitesurfing community in Italy is concerned about these events. Seems the spinning gust (don't knot in english the exact term) came out in a very normal kitesurfing day with average wind, leaving no time do do anything to the kiters being lifted very fast. This area near Rome is not new to events like this, but not with dead before.
Top

Here are the main points of the voice over from the Italian video:

Apparently they were out for a while and had come in to rest a bit and were on their way going back out on the water again when a massive gust hit.

A witness said that the rider was lofted flying almost horizontally, legs flaying behind him.
It looked like the worst was over and the rider was at that point coming down with the kite overhead when suddenly a second gust came through throwing him and incredible 800m downwind into a wall and was killed.
(800m sounds like an exageration, but the closest houses to the beach are 400m away).
He was an instructor and had just got married a month before.

The injured rider is at the Policlinico Gemmelli. His condition is extremely serious.

From another video a lady said that the rider who was not injured had managed to "unhook his kite" when the gust hit.

The kind of gust that the various people described is a "Tromba D'Aria".. sort of a small tornado.

I searched for weather related stories in the area:

In the nearby city of Cerveteri, a strong whirlwind damaged the roofs of buildings, destroyed a playground and uprooted trees, blocking streets.

In Rome itself, a storm led to flooding in the streets and disrupted train services.

Summer storms had been forcast in the area.

I found another report that says that the injured kiter is very serious, but Doctors say he will pull through.
Top

we are too used to launching and landing without keeping one hand on the QR once things go wrong and your hand is not on QR those fiew seconds are lethal. this guythat died apparently was landing the kite, the other one is not in danger of dying apparently.
Top

Rather not kite in conditions or put myself in situations which even consider having to use the QR. If you're putting yourself in such situations on a daily basis, then it'll only be time before you get smacked!!
Top
Post Reply
21 posts