JC kiteboards (JC stands for "Jérôme COURTOIS", the well known SPOTZ shaper) is based in south of France. His name is not totally unknown for some of us.
As he his the type of guy who never releases something if not properly tuned, the latest opus of his know-how can therefore be considered VERY SERIOUSLY.

After 10 years of shape for the windsurfing, surfing and kitesurfing industry, here is his solution for the stand up hydrofoil for kiteboarders (airchair / airski like).
This is my free and personal translation from his website http://jc-kiteboards.fr/news/2010/07/le ... /#comments
My own comments appear between square brackets [like this].
Enjoy !


Announced a few months ago, the new low-swirl kitesurfing stand up hydrofoil from SPOTZ has just been officially released.
With a 96cm-long mast [38"] and only 15mm thick [0.59" or 9/16"] [yes, 32% slimmer than the existing ones on the market!] this new SPOTZ toy, reinforced with state-of-the-art carbon fibres placement, splits the chop with elegance at full speed aiming at minimizing water and air disturbance. 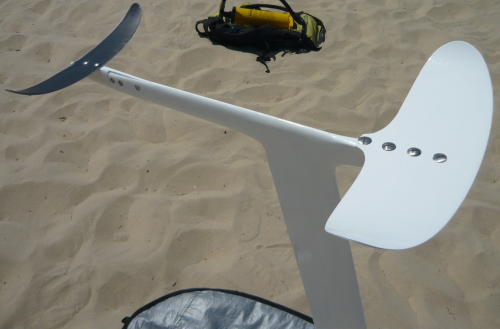 The length of the horizontal T-bar part is just 76cm [29"] and offers a high stability - a very precious feature to master the beast at high speed tacks.
The rigidity is already excellent but will still be improved on next models by still optimizing carbon fibres orientation. 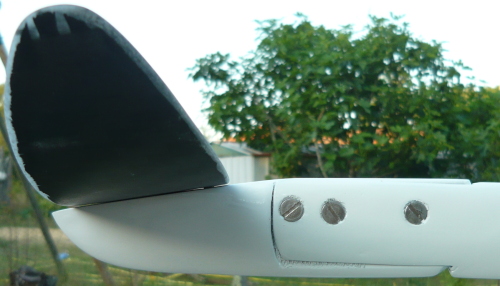 The rear stabilizer can be easily and precisely tuned. This adjustment allows to flawlessly match the torque of any front wing with any rear stabilizer, independently of their respective profile and tuning angle.
The vertical and horizontal parts of the T-bar have been respectively designed with a finely tuned hydrodynamic profile in order to minimize their influence on the" flight" characteristics of the front wing/stabilizer torque and also to minimize the hydrodynamic drag. 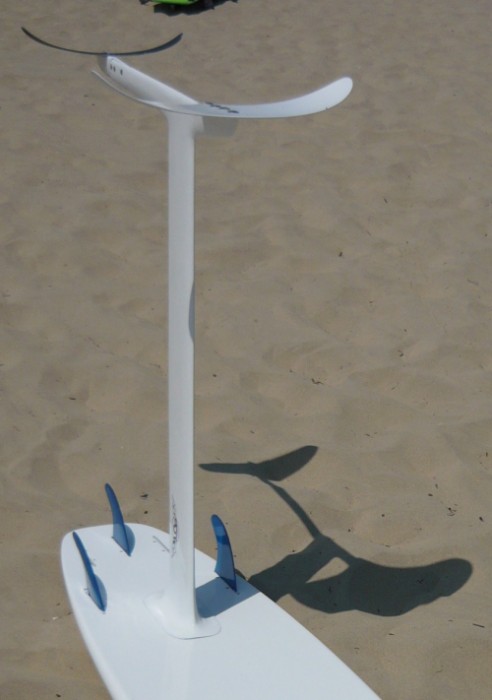 The vertical part of the T-bar, placed at an angle of 7 degrees to the front wing [and to the bottom of the board], provides several advantages. On the one hand, in addition to the short length of the horizontal portion ahead of the mast, the inclination limits the torque created between the centre of push of the hydrofoil and the centre of gravity of the rider, located just above.
On the other hand, it penetrates into water so "elusively" that mast torsion phenomena are self-stabilized, whereas on a perpendicular mast or still worse leaning forward one, those phenomena are self-increasing in a dangerous way and generate a yaw phenomenon so troublesome to hydrofoil kiteesurfers. (… a bit technical without schematic, is the least we can say)

This foil is fitted on the SPOTZ "freeride" board, the latest directional board using a modified Tuttle box (very light/simple/effective/clean/reliable).
The presented model is fitted with 5 fin boxes (FCS and FUTURE FINS compatible) in order to ride either in Quattro or Thruster mode.
Based on his experience in surfboards and long-distance kitesurf boards manufacturing, JC-kiteboards offers here the ideal compromise for everyone who wants an ultra versatile directional board used without hydrofoil: a superior upwind capability compared to existing kitesurfing directional wave boards in addition to grip, great top speed, amazing control in the chop (even strapless) as well as being comfortable during jibes and surf moves. 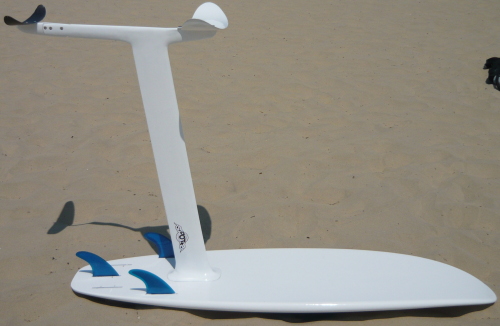 Converting the board from hydrofoil to directional mode is done in 2 minutes time watch in hand.
OK, let's be realistic, 4 min will be needed for the comprehensive set of operations with the same and unique straight screwdriver: set up/removal of straps and fins, stabilizer angle adjustment, stabilizer and front wing attachment.

With this freeride board + hydrofoil set, you have in hands a toy that offers you plenty of opportunities: hydrofoil riding from 6 knots, competing in long distance races or for fun, ripping in waves while keeping control during tricky conditions or at high speed, riding carefree (or not) on your home spot with or without straps, in short, fully enjoying any session and being happy every time you ride whatever the weather conditions and the chosen spot.

[...] Its 15min past midnight and I need a good rest to satisfy pending orders

The video the next week, the price 900€ complete ( photo'version with board freeride + foil full carbon )...

I'll use this new foil in first time this WE, feedback just after, you can reed the results on :

Nice!! Good to see the foil concept is still being developed. I think it looks intuitively like it would work nicely, however there are a lot of variables to mind when designing foils. One of the problems I have (note: I am not very god at riding it) is that although the upwind ability is insane, it becomes harder to control in higher speed..and the board penalize you pretty harshly for any errors at high speeds. Normal raceboard becomes moroe stable at higher speeds..at least comparatively. That means that means that in races foils will do fine going upwind, but not as good going straight downwind on a speed run.

You barely need a board under the foil though...and the footstraps would be placed differently on a foil then on a surfboard (me thinks). I hope the desire to cover so many different things doesn't inhibit the overall design of each component.

A few picts to describe the simplicity of some details that matter
(Credit = JC Kiteboard site for pict1, JM33 for pict 2&3

The multi purpose board - looks like a normal directional kiteboard (5'59ft x 17.17in) 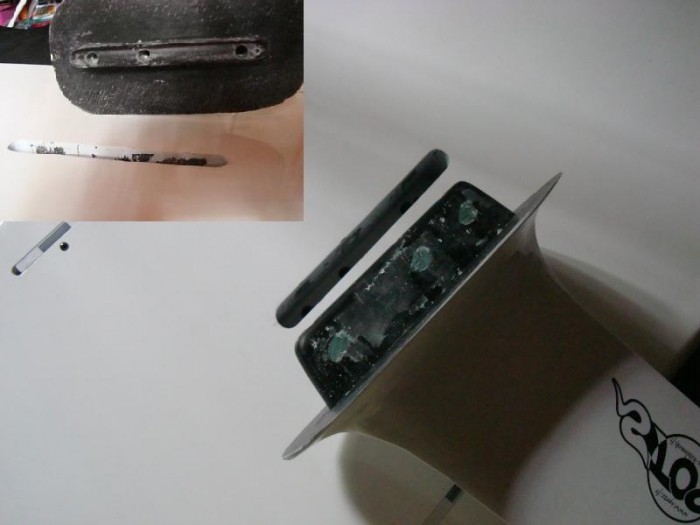 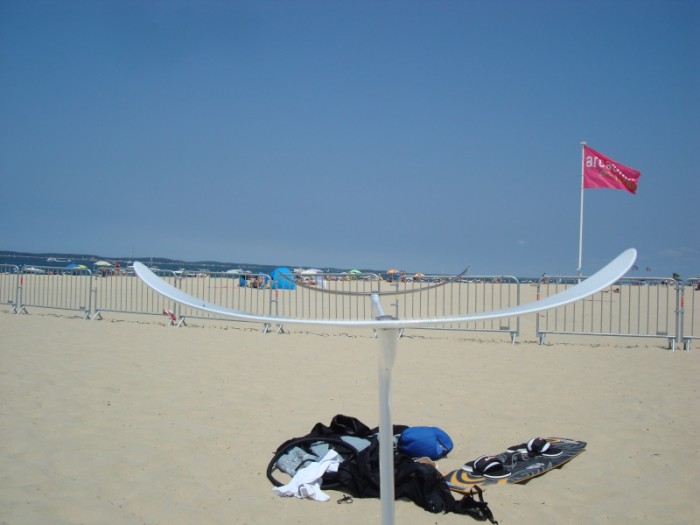 at that price i'd expect the board to make me coffee too!!

The board is my choise: the foil "2 in 1", foil in little wind, and freerideboard in great waves or great wind but board general-prupose more interresting for me...

Looks like an incredible and beautiful high tech board

I would think sea weed and shallow waters would be a problem but I've never seen one first hand though.
Top

First try for me in foil tomorow in afternoon !

The board alone is fantastic !!