Kiting on short lines - to 10m

Kiting on short lines - to 10m

I've seen some discussion here about different line lengths, with people talking about going down to 20 metres.

When I started kitesurfing 11 years ago we used 40m lines. I was happily surprised to find several years ago already that cutting my 27's down to 20 meters made precise kite control a lot easier, without losing jump height. When you're up in the air and your kite happens to go to the wrong place it's much easier to whip it over to where you want. Also it's possible to move your kite more aggressively around the window to get the power you need, that's why there is little loss on jump height.

Now I kite exclusively on 10m lines when I'm on kite sizes of 12m or less. In borderline light wind or if you have high body weight there's some advantage to longer lines but when you have good power, I've found that 10 meters is plenty. Waterstarting on shorter lines involves knowing how to make an effective powerstroke (using the whole wind window) and how to use the board properly.

Advantages of short lines: easier and faster to set up, less tangles, you can use a smaller launch area, and there is less getting in the way of other other kiters, windsurfers, surfers and swimmers. Remember that with 27 meter lines, your area of responsibility to keep clear (drop zone of kite) is about 1,000 square meters (area of semicircle with 27m radius), not counting your additional safety margin. Upwinding is more efficient with short lines because there is less wind drag on the lines. In gusty winds, I find recovering control of the kite is easier.

I've been teaching people how to kitesurf for 7 years. The majority of our students nowadays are happily riding on 10 or 15 meter lines, which are far less intimidating for beginners and for good reason. The majority of them, when given the choice to try out different length lines, opt for going back to the shorter lines. The kites being manufactured now, with their improved design and depowerability, make this much easier to do than when Lou Wainman pioneered the idea some years back.

Windsurfers (who get planing with no powerstroke at all) have learned the importance of accurately flattening out the board and pointing downwind to pick up speed until the apparent wind kicks in. Kite students who don't learn how to do this require much larger amounts of power in their window to get riding.

Well, that's my experience. I encourage anyone go out and try it, then please post here what you find. Go out for a few powered-up sessions on 10 or 15 meter lines to get used to it, and I think you'll be as stoked as I am on short lines. From where I see it, shorter lines are the future of kiting.

Starting in 2010, the Airush bars allow you to set your line length to many shorter line settings right out of the bag. Some manufacturers are working on a short-line specific kites but I've found that pretty much any kite that files well on long lines is also good on short lines. 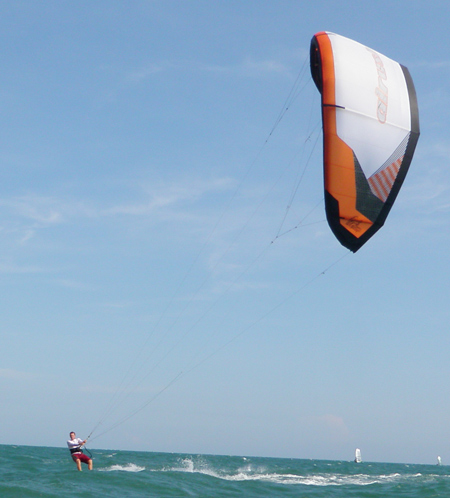 Fo Sho! I would love to be able to ride with short lines all the time. However, our winds in Sol Cal are pretty light most of the time. So we need to muster up all the power we can get.

When I do fly my Wainmans on shorties, they are on 17s and I love the instant response and sheer madness when it comes to powered loops!

Thanks for posting Matt...do you have any videos of you throwing down with 10s?
Top

i tried uploading a video in several formats,

any help from someone who has uploaded video successfully on this forum?

upload the video to youtube. then post a youtube link in this forum. I don't think you can upload a video directly to this forum.
Top

Thanks Erland. I only have one clip, and it's nothing special.
Here it is:
http://www.youtube.com/watch?v=KddbP_MUgRg

I agree with most of your points on this one

The very reason we are so much better on the water than windsurfers, are (IMO) the fact that we can outbalance everything by means of an efficient powerstroke.

Meaning, we get on a plane so much faster, and can stop and start whenever we want to "on the dime" - precisely because we dont have to bear too much away and get apparent wind and "rely" on this only

Windsurfers are extremely inefficient on short tracks, because they have to bear away and use a long distance to get into planing, compared to a kitesurfer that can use the kite instead, OR use both bearing away and the kite - so here we excel over any windsurfer.

When going downwind, deep (racing f.ex), or when jibing with any board - we can also use the "dynamic" range we obtain by having the window to position the kite and get the powerstroke at the EXACT point we want it, and in a reasonable amount

(the latter is the problem if too short lines - the amount is not satisfactory....)

Especially in waves, you would most often like to be able to get some kitepower, even when you are standing still trying to conquer a breaking wave and heading upwind to get angular over it - so here apparent speed wind does not make sense at all (not an option).
And when riding waves, you would never rely on apparent wind directly - but would search for the best line through the surf and curl etc - so here you would both like to have short lines for quick direction change yes - but longer lines to be able to have some power reserve in every situation.

At least my personal experiences were, that 15-20m lines are the shortest I like to use in waves.
And 15 or 17m are too short for me most of the time, so I use a bit longer always, so I dont have to change but can get to know my setup better instead

But it is clear - that lines has become shorter over the years.
20-24m is standard line length on most kites today, as a good compromise between what we want.
Many years ago 27-28m was used, but history now

matt at jibe's wrote:Thanks Erland. I only have one clip, and it's nothing special.
Here it is:
http://www.youtube.com/watch?v=KddbP_MUgRg

Inspiring man, I'm jumping back on my 17s even if the wind sucks. Thanks!
Top

The general trend here in Vietnam has seen more riders in recent years down to 20's or Sub 20m's. Especially the Wave riders last season needing a quicker turn trying to maximize the waves as the set periods are below 8 seconds normally and close out pretty quick.

I was blow away how efficient My 7m Wainman Gypsy was in tracking back upwind on 17m lines. I my experience it took a few hours to get my head round especially on top/bottom turns. On the waves I felt I had to turn the board earlier and send the kite later as the kite shoots through the window, you've gotta be on the money to keep your board speed ready for the next wave. Now I'm totally converted to the idea. It's great to experiment. Now what do I do with the spare set on 7m lines......
Top
Post Reply
13 posts

Users browsing this forum: No registered users and 23 guests