Just stumbled across this pic, apologies if this is old news. 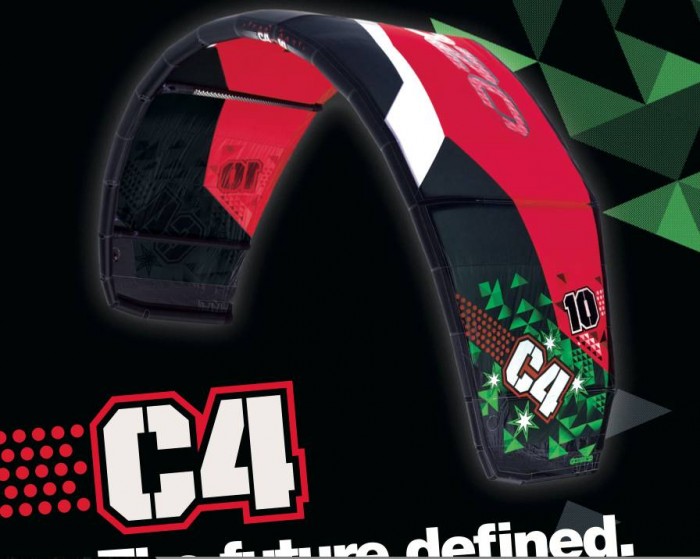 Looks like the new one.. Whats changed is the question..

From what I have heard they kept all the current flying characteristics, but then with an improved lowend. But looking forward to test it. And it has some more tuning options on the kite.
Top

Hello, this is the new one, 2011 brings a slightly thicker LE with a more powerful profile for more low end grunt. Apart from a ton of new features on the kite such as a Boston valve for faster pump up and pack down, cleaner tips and zip, there is also a unique new system to trim the kite in two seconds without changing the bridles.

You can chose between a wakestyle grunty classic C kite feel or swap it back to the full depower C4 that we have all loved this year. All with a simple two second change.

If it is a gnarly big wave day you can ride with the safety and comfort of the full depower setting or if it is flat water freestyle time then pop it into Classic C mode and rip it up like the old days with all the comforts of todays relaunch, safety and kite speed.

"Boston valve"...looks like other companies finally realize the superiority of the valve Cabrinha has used for ages!
Top

Can the 2010 C4 be modified to have the new trim system for the wakestyle grunty feel? So want this, but New kites every year is just to expensive....

What exactly does the new system do?

looks can be deceiving, but this kite looks good. no pulleys right? any pics of the bridle and the bar setup? thanks.

from the spec it seems like in the smaller sizes last years model should be about the same as this new one right? (smaller kites don't need the added LE thickness). i'm assuming i could use a 2010 Naish bar on the kite.

core Fuel users would/will kick my ass for saying this, but next gen Fuel designs should probably head this way..
Top

Hi Plastimo, there will be more photos coming soon, the guys are off to take the detail and riding pics next week. New kites every year are expensive for sure and it is nice to see Ozone going with the same range as last year but just adding some tweaks. For sure the 2010 C4s are still amazing, it will be interesting to see if the mod works on the 2010 ones.

I cant say though as I am not sure if the bridle sewing positions are the same or not.

Looking forward to it though.

are there are updates planned for the chicken loop and the quick release machanism? Most of companies are already following the trend of push out release, Ozone being one of few still hanging on to the pull-for-release.
I spent about an hour on C4 13m and really loved that kite from the very first second. But I'd preffer to have all my kites allinged safety wise (I'm using SS comp stick bar for all my other kites)
Top

Maybe all others company should use the Ozone system for security.... No need to change..
Is one of the easiest and simpler in the market but works perfectly...
No jamming or too much effort to engage and super easy to put it back together in the water, even with one hand...
I don't like a push away system as if dragged on the sand could be hard to be released...
You choose if you want to release on the left or on the right... Is really perfect!!
Bye Jankie
Top
Post Reply
153 posts