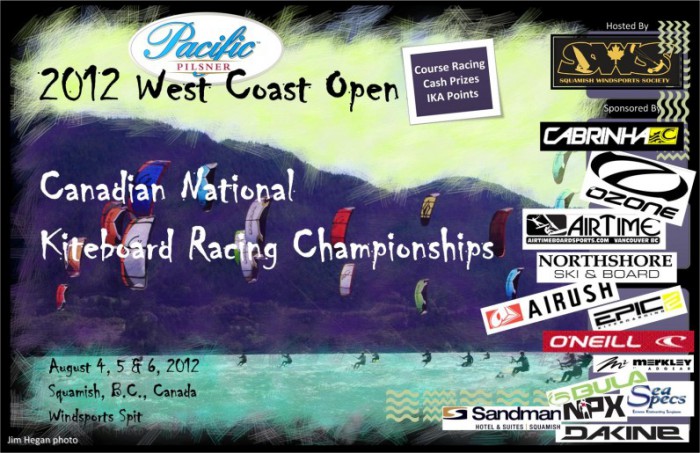 There is great support from our sponsors. Big thanks to Pacific Pilsner as our title sponsor. Cabrinha, Ozone, O'Neill, Epic, Dakine, and SeaSpecs are all big contributors to our event. And a big thank you to our two local kite shops, Airtime Boardsports and North Shore Ski and Board, who have thrown their support behind the event.

We currently have 31 riders signed up. 18 of these riders are from out of town. Some big International names in racing will be competing for the West Coast Open Title. Entry is limited to 35 riders, so only 4 spots remain. If you’re planning on competing, please sign up.

Here is the link to the Entry List:
https://docs.google.com/spreadsheet/ccc ... 3RkE#gid=1

Here is the link to the Entry Form:
http://www.squamishwindsports.com/event ... _Entry.php

All the local SWS Race Club racers have been training hard all spring and summer. We’re ready to take on some of the best in the world. See you on the water.

There are now 35 riders signed up. The event has reached the maximum number of 35 riders. A wait list has been started.

If you know of other riders that are wanting to participate, please advise them that a wait list has been started. We will not be registering riders at the event site that are not on the entry list.

WHy have you guys limited the numbers

Is it the site cant handle more?
Rescue boats?

The event is limited to 35 riders as the racer launch area is not large and can't handle more than 35 racers. We have a separate racer rigging/launch area and a separate day use area to ensure that free riders , windsurfers and racers all have access to the Spit over the event weekend.
Top

6 Races Day 1. The usual suspects are battling for top spots with Johnny Heineken, Bryan Lake and Adam Koch all riding very strong. Close behind are the top three Canadian men Stefano Rista, Adam Vance and Colin Ernst. Erika Heineken had a great day 1 and holds the top spot for the women. The top canadian women is Jessica Sickinger.

Day 2 weather looks similar to day 1 with 15kts on the course.

5 races for Day 2 for a total of 11 races so far. Day 2 wind came up a bit later so the first start wasn't until shortly after 1PM. Kites ranged from 9-13m for the first two races with a number of riders switching down between race 1 and 2. By the end of second race of Day 2, the wind was solid with a number or racers very powered if they hadn't switched down. After 2 races there was a break for lunch and then 3 more races in the afternoon. Racers were on 7-13m kites for the afternoon.

Similar to Day 1, the top 3 finishers were Johnny Heineken, Bryan Lake and Adam Koch. The finishes were starting to mix for the last four races of the day and positions were changing. A kite tangle at the start of the last race of the day made for a tough start for a number of racers in the fleet. Stefano Rista, Adam Vance and Colin Ernst are holding down 4th, 5th and 6th place respectively and are the top finishers for the Canadian men. A grudge match is setting up between Stefano and Adam who are only separated by 2 points after 11 races.

Erika Heinekin is racing very strong and is currently in 1st place for the women and sitting 11th place overall in the fleet. There is a battle going on each race with Erika, Eric Due, Andy Wong and Mark Leng to decide who will round out the top 10 in the fleet.

Jessica Sickinger is holding down the top spot for Canadian women. Catherine Dufour and Rainbow Monds are separated by only one point for 2nd and 3rd place Canadian Women. Day 3 will be the deciding day for these two.

The forecast is again good for Day 3. The awards ceremony will be at 5:30pm Monday afternoon on the Spit.

Day 3 wind gave the competitors lots to consider. The forecast was favorable for higher winds, maybe in the 25kt range. The inflow was on as the competitors assembled for the the 10:30am riders meeting. However, the wind didn't build quickly and racers were wondering if a large kite would leave them overpowered if the wind came up quickly. With 11 races completed over the first 2 days, there was little separating the top spots. It would come down to conisistent good finishes on Day 3. Two two-lappers were run before the wind dropped, so the riders came in for a lunch break while the RC contemplated how to get off 3 more races. After a short break, the wind stepped back in and the racers went back out on 9-13m kites for 3 single lap races. The starts were critical on these shorter races.

There were a number of battles on the course of note. Kyle Touhey and Paolo Rista traded places through the day, with Kyle showing his strategy and endurance to dig deep into the top six. Eric Due, Andy Wong and Erika Heineken were having a race within the race as they settled in to determine who would round out the top 10 for the fleet. At the top of the fleet Johnny Heineken, Bryan Lake and Adam Koch swapped out the lead at the windward and leeward marks making good decisions race by race to play the shifts, find the strongest wind, and sail the shortest distance to the marks. Stefano Rista and Adam Vance had thier eye on each other all day as they fought for the top Canadian spot. Local legend Colin Ernst kept the top 6 on edge as he used his skill and local knowledge trading places through the day with the top three riders.

With just a couple protests to deal with, the results ceremony got going as a light drizzle set in. After the baking sun of Saturday and Sunday, the cooler weather was a reprieve.

To close out coverage for this event, here is a summary of photos and media. Happy viewing and reading.