For the life of me I cannot figure this kite out!

I am a heavier rider, ~230lbs, and my home kiting spot is the mid-atlantic, Chesapeake Bay beaches. The wind is light and variable which is one of the reasons why I chose the 21m.

HOWEVER - have yet to even launch and fly the kite at Zenith. I can't even keep it in the air and it's brand new!

1) Anyone have any recommendations?

Hmmm...never had trouble getting a Flysurfer airborne although they can be a little bit weird to the uninitiated. Let me tell you what I do with my 15m S3. It'll be similar to yours to make no difference.

I like to launch 'hot' in the middle of the power zone...but others use a side launch. I lay the kite out on the beach...trailing edge upwind. Close the deflate flaps. Put a little bit of sand on the edge as you unroll the kite.

Lay the line out up wind. Walk the lines and check the pulleys are good and there are no tangles in the bridles. A new kite should have few / none. But sometimes people don't pack these away very well.

Next...go to the intake ducts. Make sure they are open and lift each up into the wind. I sometimes 'pump' the middle ones up and down a bit to get air into the kite.

Go back to the bar and hook in.

If there isn't much wind you might have to grab the centre lines (at the strap) and give it a slight pump. The kite will start to fill with air and rise into the sky. It'll probably hang there at about 45degree angle looking like a jelly fish while it fills with air. Don't panic. Sometimes it is best to pull in the bar to keep it here in a semi stall while the tips fill and sort themselves out. As the canopy fills push the bar out and you'll soon have one of the prettiest wings on the market sitting at 12 o'clock.

Use the depower strap if it is windy. Also be prepared to pull in the bar as the S3 does tend to overfly a bit.

You will not need much wind to Kitesurf with 21m....

There's also a lot of advice from Flysurfer enthusiasts on www.foilzone.com. Have fun and let us know how you get on.
Top

what wind speed are you trying to fly it?

below 4-5kts it can become tricky to keep it parked 12 a clock.


are your dump valves closed (trailing edge in the middle, two of them) ?
Top

I recommend selling it...only to me....and very cheap. I will take it off your hands just to be nice...

Even if it's brand new, I would take a look at the lines to be sure they are equal in length and also a quick check to the mixer test. This kite is soo easy to launch and fly and wonderful in LW. The best thing would be to find someone in your area that ride flysurfer kites so he could help you.
Top

gambolero wrote:For the life of me I cannot figure this kite out!

I am a heavier rider, ~230lbs, and my home kiting spot is the mid-atlantic, Chesapeake Bay beaches. The wind is light and variable which is one of the reasons why I chose the 21m.

HOWEVER - have yet to even launch and fly the kite at Zenith. I can't even keep it in the air and it's brand new!

1) Anyone have any recommendations?

Have you done everything that it says on the Manual? eg. Prefill it a bit etc etc.?

It would be easier for me to help you if you could be more specific about what you are doing and how the kite is behaving.

knotmyfault wrote:That’s what they call ‘’German engineering’’’…
$3000.00 kite that you cannot fly out of the box…
Mixer test… Have fun !

I think you're incorrect,
because when I received my 21m Speed3 the factory mixer set up was good for a year out of the box.
Than I had a mixer re-adjustment on it and now 2nd year I have hundreds of hours on it with the same mixer set up,
which took less than 15 minutes to do.

I think probably there is something wrongly done there.

* I suggest test it first time in 8 to 10 mph winds and pre inflate upwind by opening the
2 deflating ports, by using sticks between the velcro, or follow the video.
* Need around 5 - 6 mph wind for them to inflate.
* After couple minutes close the velcros and launch for test flight downwind or at the edge.
* The 21m will fully inflate slowly which is normal and everything will be all-right.
* If something went wrong you could describe the details here,
or check the ELC against the picture for light winds, if anything is too far off.

@ = on picture reference for testing,
when at the ELC (easy line connectors) at the end of bridals lined up for mixer test. 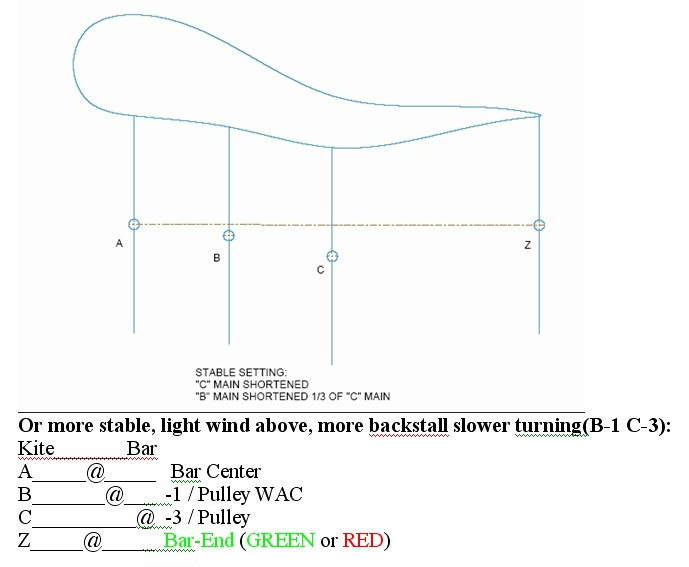 I just got a 21M Deluxe, flied it two days in a roll. it will stay up @5-6Knots but not enough power to go out on the water. every time I lower the kite, it would not go up. The tail will jellyfish If I push the bar up.
Flies so different than a LEI.
Guess need more wind to learn this new toy.
Top
Post Reply
29 posts

Users browsing this forum: No registered users and 44 guests