I bought two Clouds sight unseen based on the same long thread here on kiteforum that others have mentioned. I like experimenting with gear, and it seemed to me that the designer was authentic in his pursuit of his goals, and he had evidence (photos, video) to show that the kites worked. I live in San Francisco so I bought an 8m and a 10m – light wind kiting isn't really an issue here

I've ridden both several times in the bay and ocean (waves) and can echo many of the same observations that others have made: solid kites, turn fast, very light, pack down tiny, very grunty, responsive, relaunch no problem.

Two things I would say in more detail about the Clouds:

2) they have very short throw (sheeting) distance on the bar. Most other kites I've flown have 1-1.5 feet of travel in the main sheet, er, bar throw – as I understand it, the Clouds are designed to be sheeted like 3-4 inches in and out, that's it. If you sheet out more than that, the kite won't be flying right and will be be very unresponsive. It has taken some work for me to adjust my riding to the shorter bar throw.

@windrupted: the Clouds work great in surf. They are very 'twisty', and turn quickly. Watch some of the BRM videos, you can see that there. The kite will not, in my experience, do anything like "wad up or twist" in bad air. When overpowered the Clouds will flutter (madly, if madly op'd) and you can't really do much with them in that state but this isn't a problem with the kite, it's simply that I've have to adjust my judgement of what size to rig. Once or twice, I have seen the kite lose its structure and bend backwards when under-inflated and way overpowered due to user error on my part. If I rig the right size, no problem. I've dealt with some very holey / gusty conditions with the Clouds (pro beach Maui w/ mad wind shadow caused by trees, and at Crissy in SF, for example), and they handled those conditions at least as well if not better than strutted kites I've ridden.

Overall, based on those that I've tried, all modern kites are pretty damn awesome. Some are slightly better for some things, but – think about it – you could enter a race on a Cloud, or take your new race kite out in the surf, and it certainly would work more than not work. I applaud Greg at al for trying something new!
Top

Great insight, thanks for sharing your experiences.
Top

Ken Winner wrote:Birds, wasps, stunt kites, and planes are rigid.
ALL high performance aircraft (eg hang-gliders vs paragliders) have rigid structures.
Rigid hang gliders out-perform soft paragliders on all measures. Interestingly,
the trend in paragliders is towards increased rigidity, e.g. stiff mylar reinforcements,
plastic stiffeners in the leading edges and carbon fibre rods sewn into the ribs.
These stiffening innovations have resulted in paragliders that are so successful in competition
that old-style soft gliders are no longer competitive.
Similarly, kite manufacturers are always looking for ways to make kites more internally rigid,
eg by joining the struts firmly to the leading edge, adding fifth lines, and mini-bridles.

rowboat wrote:think about it – you could enter a race on a Cloud

Except for Airush.
Top

Just an example of how powerful the Clouds are.. I was out at Crissy yesterday with winds avg 18mph on my 8m Cloud + North Nugget. The kite is SO light. 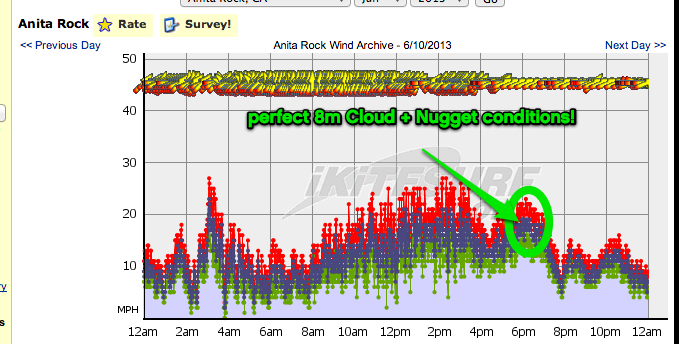 Naish experimented with a strutless kite 10 years ago. It had a small diameter inflatable leading edge and the canopy was a self inflating twinskin foil . Very much like a like a Peter Lynn Arc. It flew on four lines. I saw Don Montague fly it at Kailua. I was very excited about thid hybrid design, but never heard more of it. Can anybody fill in the blanks?
Top

Beachboy wrote:Naish experimented with a strutless kite 10 years ago. It had a small diameter inflatable leading edge and the canopy was a self inflating twinskin foil . Very much like a like a Peter Lynn Arc. It flew on four lines. I saw Don Montague fly it at Kailua. I was very excited about thid hybrid design, but never heard more of it. Can anybody fill in the blanks?

It could very well have gone the same way as windsurf slalom sails.

"Once upon a time", when double skin wide camber sails were "the thing" - every brand used many and deep cambers.

Later, they/we realized that the cons outweighted the subtle pros.

The pros is less drag of course - but only by a very very small amount actually, as there will be a stagnant air bubble on the leeside of the mast, giving a quite fine flow over the high pressure side (the rider side).

And the cons are more weight, not as flexible and can change for the worse when twisting a lot (has to twist correct), and it sucks up huge amounts of water when "down", and is more expensive.

I think precisely the same issues apply to kites

I love the clean all white look of the Clouds. A refreshing change from the splattered graffiti look of most other brands. Nice...
Top

Anyone else here dying to buy a cloud but doesn't have a local shop that can do a demo ? I'd 99% bite if I could demo first... just not willing to take that small risk...
Top

Update on the 17M
My third session in 8 to 13 knots in Cabo frio(Rio),2 hour test.
most locals were intrigued by the kite with no ribs.
i weigh about 70 kgs and used a 133 x40 board.
on the low end with this board i was able to keep ground( 9 knots).
kite was slow but turning was as fast as my high aspect kite12m in low wind.
to keep ground i had to down loop to build speed and park to ride.
Turns great for such a moster size.
in gusts the kite becomes very strong and builds speed very fast no need for looping.
Bar pressure becomes médium to heavy, but nothing strange.
After 13 knots this kite start to become overpowered and need at least 70cms of free depower rope to work the upper range.
Really simple kite. very friendly, but limited upper range.
you can safely take it to 16 knots but it will flutter a lot due to depower and lack of structure.
relauch is easy in 9knots just needs to have a board to have preassure.
This kite is light as a feather and in low end choking it is only if there is no wind to kite or not well rigged.If i had a bigger board with me 8 knots and riding up wind without thinking.
this kite has doubled my wáter time.