Guys, are there any in depht tests/reviews available on the notus XLW 21m? Maybe i'm just poor at finding them?

The weight suggests it is a great flyer in low winds...

I am also interested to get some reports. I think coupled with a hydrofoil that the zeeko 21 must be better than any other kite in light wind. But with the winds I am going out on with my 10m, I would actually not mind hearing reports of the 14m extra light Notus kite. I also wonder what the pricing is like?
Top

I've been on the 21m a few times but not in ideal winds. So I have not really ridden it in what I think is ideal. Side side offshore in 7-16mph roughly. The average was probably around 10mph. I was trying a 5'6" surfboard and 132-40 twin tip my weight is 145lbs. The wind would pop up into the teens a bunch for short periods which made me feel super lit, but when it was in the 7-12 range, I had a great time on the surf board. Screaming upwind while a few 16's and 17's were relaunching but not staying in the air. I imagine any hydrofoil or surfboard is best suited with this big kite. The twin tip was a little tricky, I need more time out on it. I really think this kite would be perfect for a clean 5-10 mph day, no bumps into the teens. I had trouble using adjusting the trim because the Zeeko trim is super long. I didn't really tinker with the adjustments but the next extra light day, I will try to get some information and an actual review.
Top

Thanks PVIT for your first impressions. Did you have trouble edging against all that power with the twin tip, suddenly being pulled off edge in the gusts, or trouble going upwind despite good edge grip

It did feel like there was some considerable downwind pull but I did not feel like I was getting yanked over. I have .8 inch fins on my little twin tip so trying to edge upwind even on smaller kites relies a heavily on my legs. Really just got a bit tired. Had I been using bigger fins and/or slightly bigger board and fins it may have been less tiresome. I could have saved some energy by taking longer tacks but I was enjoying kiting by within sight of everyone on shore.

Gusts definitely became an issue. Anytime it reached the teens, I felt like I was flying a 12 meter in 25-30mph. I'll try to put some real constructive time for a review next opportunity.
Top

PVITfrumBYRAM wrote: Had I been using bigger fins and/or slightly bigger board and fins it may have been less tiresome. I could have saved some energy by taking longer tacks but I was enjoying kiting by within sight of everyone on shore.

Big kites generally won't work with twintips in my case either
and when the wind picks up over 12 mph I get pulled downwind also because of my light weight.
The solution is use a surfboard or a Mutant like in my case to get most out of it,
and in the same time you won't get tired either

Definitely even at your weight there was an imbalance kite vs your littleTT board
132 is short and 40 is narrow
Test again with TT wider board....that way you can send the kite higher in window to depower it
By nature of design this kite sits a bit deeper in the power zone
Also are you extended on your kite lines ?
If so do you have the 4m or 8m extensions on ?
Can you try again with standard length lines .....since at your weight it will improve the depower
I bet you could get 7kn low end and 14kn top end
No BS

There is especially one thing that i'm interested in: Jumping Performance

When you're out there all alone, the beach is packed with people and you have just enough power to jump it is good to give a little entertainment

as i was able to do with the Core XR2 19m last summer on a couple of occations.

The important parameter is thereby: Confidence

since you dont want people to do:

to keep you powered during transitions.

Being able to go upwind/holding ground is important but not as important IMO as how early the fun begins and what happens when there is fun is to be haved.

The wind has been so good this year on Hatteras I haven't had many opportunities to test this kite out. My first sessions the wind was blowing just under ten on the low end, averaging, 11 or 12 mph and gusting many times into the mid teens. For my weight, not ideal conditions really as when fully trimmed, the throw becomes very short and any overpowering you have to ride out our dump the kite in the kite in the water.

Yesterday I had a golden opportunity to take the kite out. It was a warm SW wind, not a kite or white cap in sight. Well that's not true, there was a Core XR3 out that flew twice for a maybe up to a minute but I couldn't tell you whether it was the 17 or 19 since it was far away.

I'm 145lbs and tested the 21 meter on the standard length lines plus the 3 meter extensions. I wanted to try without the extensions but the kite itself takes up so much of the wind window that I was not sure I could have enough margin of error to keep the kite dry during transitions.
I tried out my slightly large Crazy Fly Allround 139x41 and rode my Firewire Hellfire 5'6" with 5 fins. I have the deviant fin in because over the winter it helped me generate speed on my 13.5 on light days.

If you don't already know from research, the kite is not single point inflation. My cheap electric air pump lost a charge after about a minute and after that I had to pump 125 times to get the kite up to flyable pressure. Not all that bad though, what else are you going to do when there is no wind or waves. I'm in the process of uploading a few videos of session so they'll take time to put up here. I was not bothering to loop the kite during transitions, I seemed ok not losing too much ground if I adjusted for lightwind power. I did loop the kite once at some point and it was fine. Slow but steadily made the turn through the power zone. There was a point during the session where I probably could have back stalled the kite. I think that you really need to trim it and find its sweet spot to get max responsiveness/pull. Clearly it is that way with any kite but in extra light wind, well you get the idea.

I launched at this location where the meter is on the roof. I forget to put on my watch but I'm pretty sure I got in the water between 4:15 and 4:30 pm. I landed my kite shortly before 6 PM. While I was out on the water, I felt a short period of gusts maybe about mid session. These gusts felt like maybe 12-13 mph. 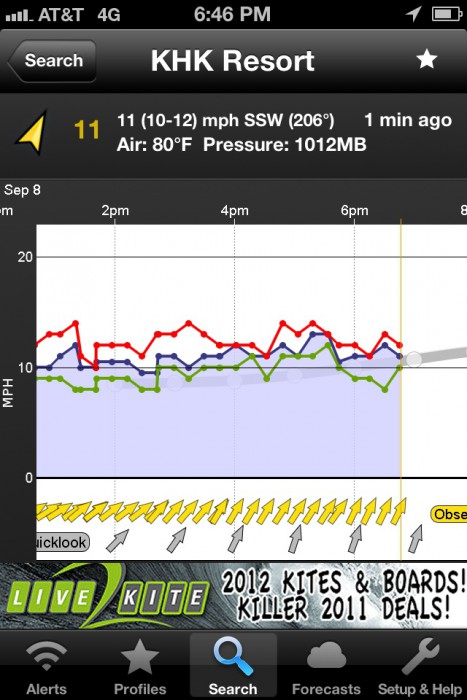 The Core kite was flying at the Waves location upwind of me and upon looking at the graph is more indicative of what I was feeling at water level. 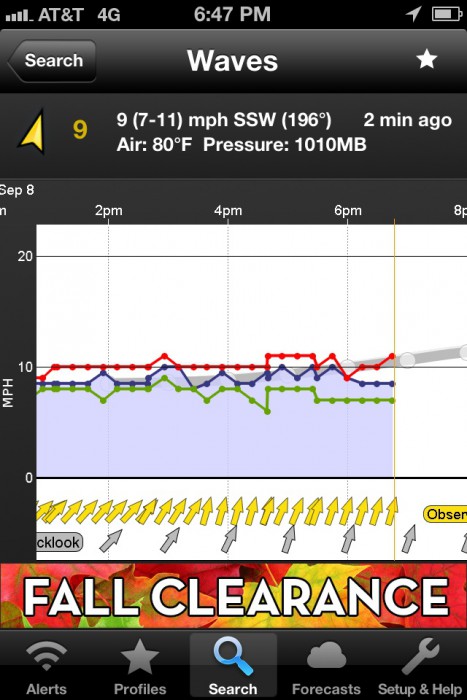 If I flew this kite a lot, I believe it would reveal more and more secrets but having only an hour or so every month or so on it is tricky to dial in. In this first clip, I was not trimmed at all and felt a solid pull, nothing overwhelming on my first day when the slight offshore ~16 mph gusts kicked in. I was also taking short tacks. I think had I gained speed and power then trimmed the kite 25-30% I could have been more effective on the twin tip. If I had access to more lightwind twin tips like last summer I would have tried them all out but this had to do.

Here's the first part of the session, I'm not doing any special edits or music, just wanted to offer info for anyone curious.
I'll get more videos up as I edit them and rotate the tacks for viewing.
Enjoy.
Here's the link if the video doesn't work on here:
http://www.youtube.com/watch?v=FKPXW3EG ... e=youtu.be 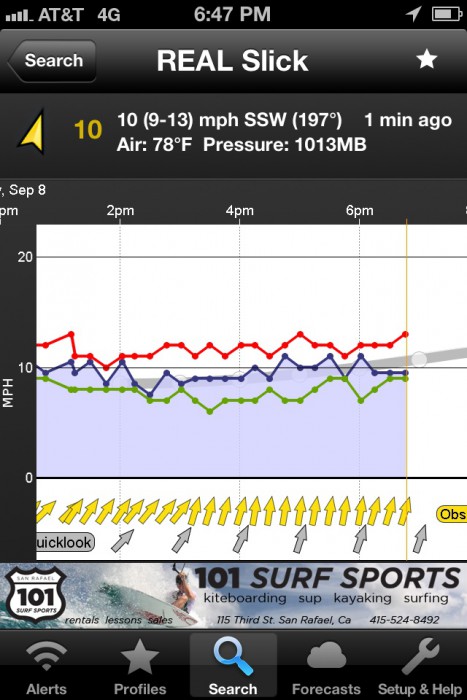