Dimitri M
Very Frequent Poster
Posts: 4779
Joined: Sun Nov 03, 2002 1:00 am
Local Beach: I travel all over the world.
Favorite Beaches: So many to list....
Style: MY OWN STYLE :-)
Gear: SCREAMER 7/9/12/14 for Free Style. Not to forget the SCREAMER 10 LTD for my one go kite.
SURF 8 & 12 for the waves. RENEGADE 6.5 and 9 for all around kiting. And some times I use my son's JUNIOR PRO 4 when it blows 45+ for the waves.
Just try the EPICKITES and you will see for yourself.
Brand Affiliation: Owner of EPIC KITES
Location: OUTER BANKS (NC) USA. Owner of EPICKITES
Has thanked: 0
Been thanked: 13 times
Contact:
Contact Dimitri M
Website

That is how we do our R&D by putting our kites to the test with mother nature.
Finishing testing the new prototype 5m SURF kite during storm. 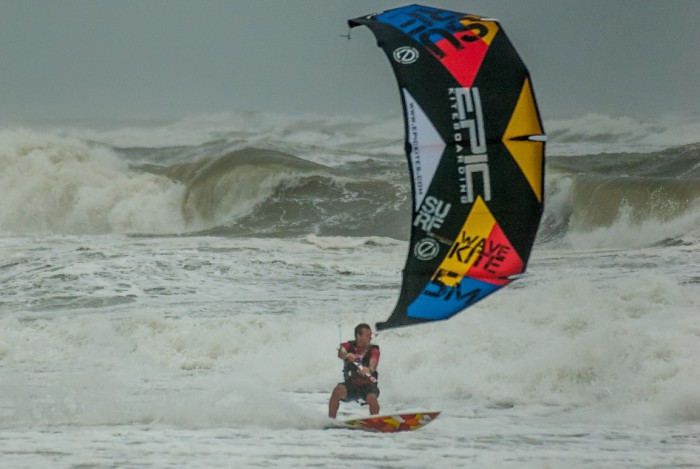 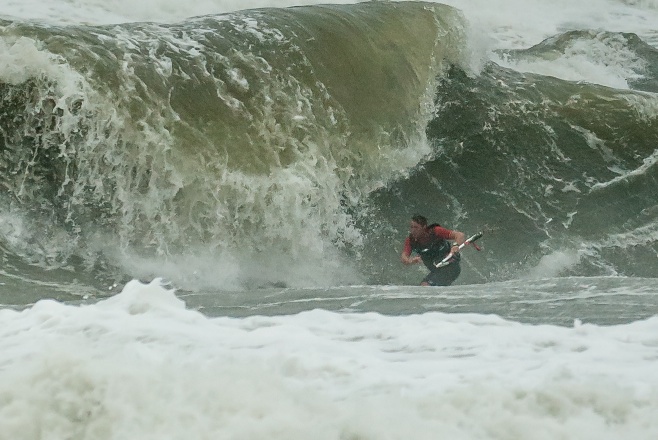 The sea was angry...wearing a impact / added float vest was a good move

Wish I would have been there 2 on my 5
Top

The inflating Life Vest I am wearing was given to me by my good friend Maverick legendary surfer Jeff Clark, so I can test it in these type of crazy conditions in case something happens. 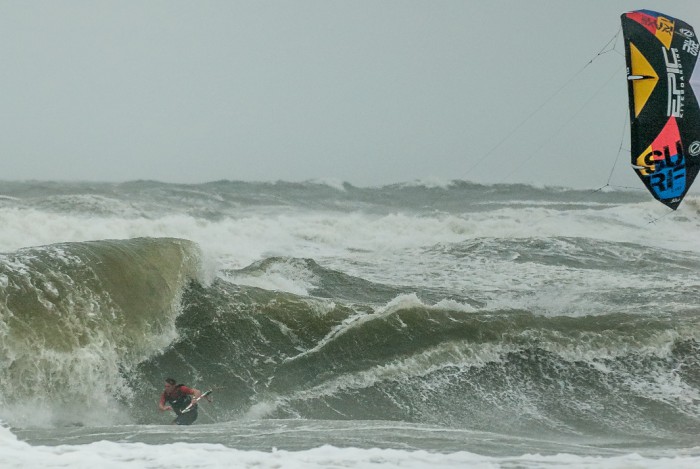 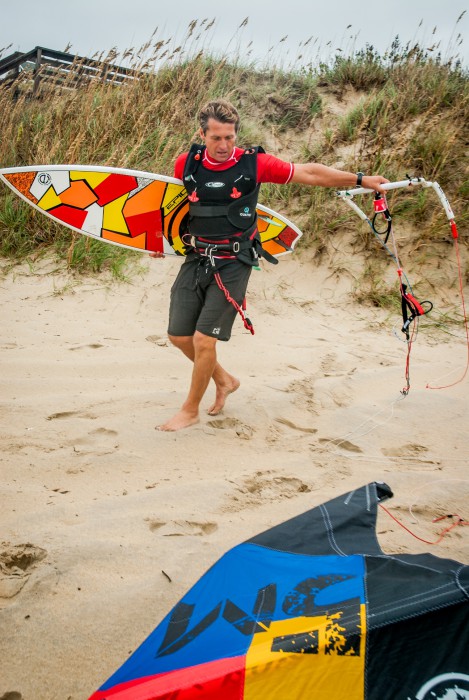 Got to play with the 6.5 and 9 RENEGADE today and all I can say is AWESOME!!! Dimitri came to kite point and i have been wanting to try them out. I have only ridden 12' RRD visions since i have been kiting for a little over a year now. Today was Gusty, blowing about 25, and the renegades ate up the gust and kept me feeling confidant. I had been on my 9 vision for the beginning of the day and it was good, a little OP at times but just getting snatched around a little, not doing too many boost. I got on the renegade and i boosted a couple jumps and it just feels like you have a lot of control when your in the air and its not as jerky. I know neither of them are jumping kites but im not big on jumping anyways but i like to throw down and put some air between the board and the water sometimes and it just felt better on the epic. I do like going downwind and the renegade just pulled way more reliable and was easy to control while going DW, I loved it. the 6.5 had plenty of power for today (145#rider) but the 9 wasnt OP either (i had it depowered in about 1/3 of the way) so they both seemed to have an awesome wind range (my visions just dont, i have a 12 and a 9 and i need about 16 to stay upwind and 18mph to have fun and then the 12 is op at 22mph) its almost as if the 9 could replace both of my kites and i will have the same, or better wind range.

regardless, i have almost no experience on many kites, (i have done a couple RRD demo days) but the epic renegades are a very nice kite for someone that is just getting off being a total beginner i think. it has a little more of everything i wanted in a kite. I will be selling my visions and getting a couple of these very soon.

Thanks for the demo dimitri, you were right about wanting one after I try it out. Ill be stocking up on some epic gear soon!
Top

I just did a demo on the 4g 9 & 11m Renegades that East Coast Kitesurfing Australia was kind enough to send me, before passing them on to a few other people for some ear grinning demos..
In short - the same hot styled graphics that you could wear to any beach party

though you may get fired if you went to work lol.
Anyway the conditions were 18-25 kots, waves one side, glass flat the other - the 11m I used at the bottom end before the wind pushed up to 25 and the 9m seemed a little jelous - shaking its middle finger

err strut at me, until I picked it up...
They both share the same very smooth turning characterics with balanced power all the way through making high speed downloop carving turns at lot fun on the face or flatwater. If you wanted it to pivot turn - it would do so without any sideways slide from the kite that washes out the redirection in kites sometimes.
The bar pressure I found, was well suited individually to each kite. The useable power on the bar throw seemed longer for the 9m though both when trimmed had very useable bar feel and not the on/off punchy trait. Making it nice for cruising down the line.
This was on the freestyle setting so no doubt on the wave setting it would have been more fun again... Its always crap when youve only got a short wind window to demo in.
Jumping ability - well heres a suprise where the game changes dramatically to say the least !
The 11m jumps well and will put you down nice and soft. Looping it before the apex - it will go round n catch you if well powered (before the apex) if not you will get spanked

And as for that 'angry' middle finger waving 9m - go fast and slash that edge hard, and it will jump very high and its one of the easiest well behaved looping kites ive tried - keeping even powered and giving you that confidence to throw one anywhere, instead of 'oh fark its stalled' just before the beating !
Tricking, the bar pressure ok, and behaves well if trimmed to your liking...
Relaunch - before you can 'pronounce it' its waiting for you, great when those sets are thundering towards you

Definately a great allrounder kite with some hidden talent..
Build wise - same toughness as previous years, though my only concern would be after 2 or 3 seasons and out of warrnty of course - would be thinness of the strut material...
The bag style and extra line sets are just awesome - I like that you can fit lots of gear in there overcrowding your car with friends for a kiting roadtrip and leaving enough space for some beers

Thanks for the demo dimitri, you were right about wanting one after I try it out. Ill be stocking up on some epic gear soon!

Mr.underwaterbears, did I tell you once you try it you would want to buy one. Some how I know the performance of my kites.

While you were demoing the RENEGADE 6.5 in the flats, I was doing a down winder in the ocean on the prototype SURF 5m and SURF 12m kites. Did not have the SURF 8m because some one else took it to demo it that day. Like you said... it was "gusty 15 to 22-25 mph" with lots of current but had a great time in the surf testing both SURF kites. 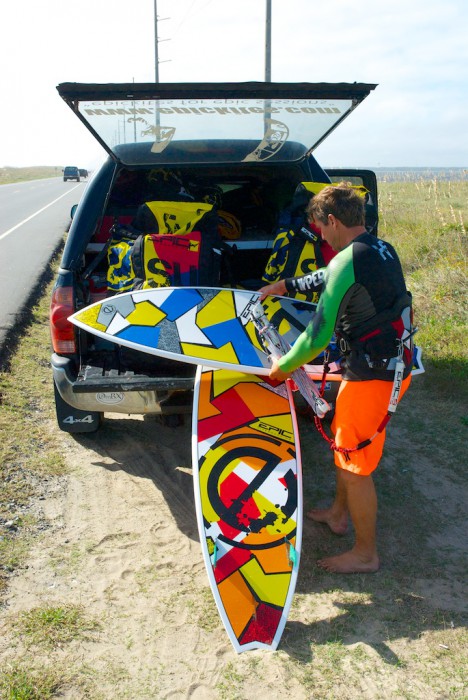 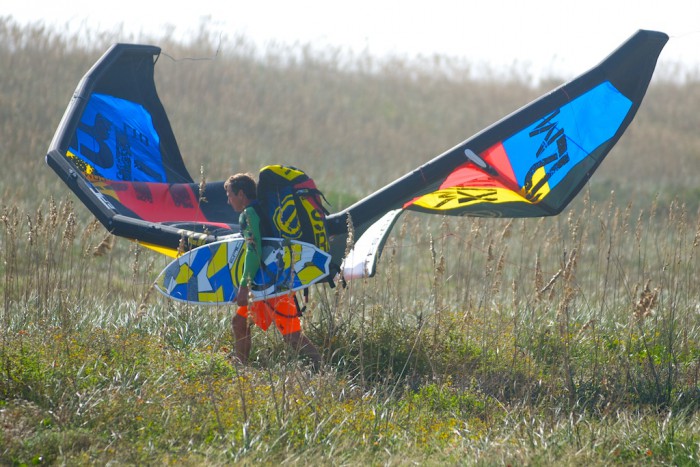 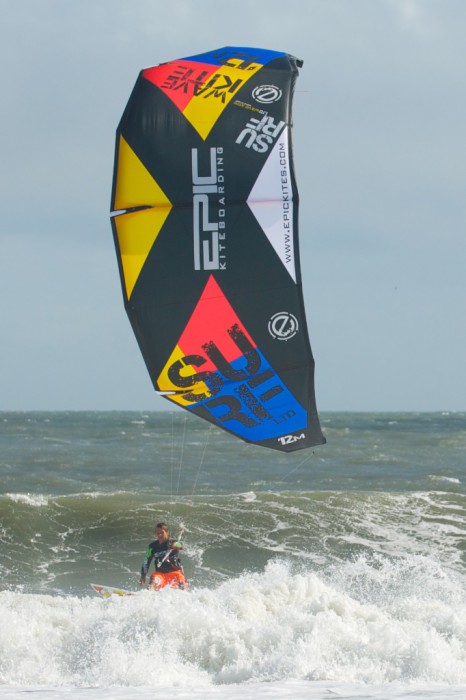 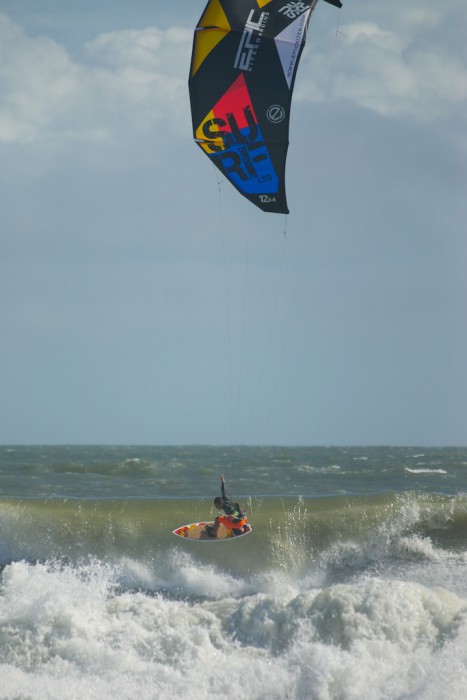 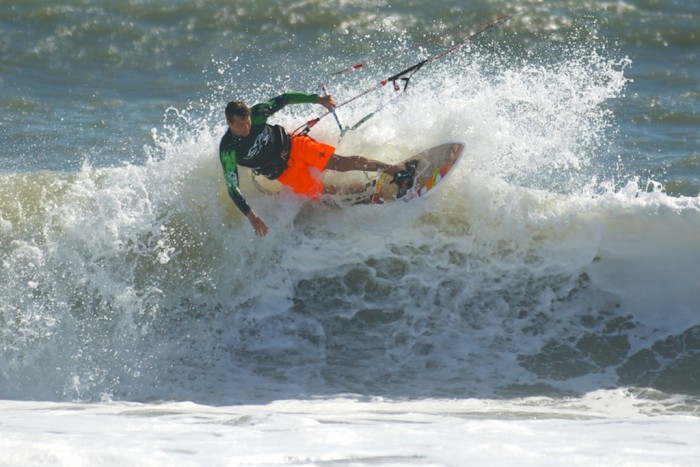 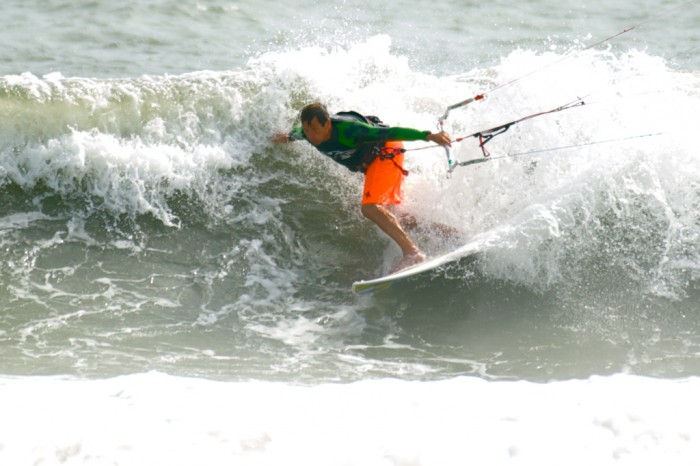 Style: try not to drown style
Gear: Whatever I own at the time....
Brand Affiliation: hook a brother up!!!
Location: Northern Ontario
Has thanked: 0
Been thanked: 0

Listen Dimitri if you are going to wear shorts that freakin' bright you should put a disclaimer before people view the pictures!!! My eyes seriously are hurting from how bright those nut covers are.....I think that you should send me a free kite for the pain and suffering that I have endured (I will be kind enough to provide you with my address to send such kite

I have finally got my hands on an Epic 3G screamer 10M Ltd to test out (a kindly gent from BC sold me his kite for pennies on the dollar). When we finally get some wind I will post up an honest review on how I find this kite! Looking forward to my free kite

Listen Dimitri if you are going to wear shorts that freakin' bright you should put a disclaimer before people view the pictures!!! My eyes seriously are hurting from how bright those nut covers are....

Their is a big reason why I wear these bright colors soul19.
Any way, enjoy your new SCREAMER 10 LTD kite and let us know what you think once you get the chance to test it. Also remember to pump the LE rock solid for best performance.
Top

Just got a Screamer 4G 12M here, have not flown a Screamer since the 3G protos.
Overall impressions of the kite upon first inspection, similar to the 3G with a few changes noted.
The one pump tubes are larger and rubber now, so better airflow on inflate/deflate.
The tube clips have a neoprene cover boot now.
This early 4G production kite has the Ronstan RF8080 Shock Block Sliders on the bridles.
I am not sure they're as good as the Epic Stainless Sliders.
The aluminum Ronstan 8080 is surely lighter, but I'm gonna make a solid guess that the Epic Stainless Slider will last longer, and the weight difference is grams.
Epic is delivering the 4G Screamer production models with the Series 20 Ronstan Orbit Pulley Blocks on the bridles, heavier and maybe not as good as a slider for locations that have tons of crud to foul up a pulley, but I like them a lot.
The 12M size does not have have two rear attachment points for fast or slow turning like the 7 & 9 Screamers do, so this is completely plug and play.
It has enough length on the back line attachment leads to be able to add a knot after the front bridle stretches a little, so you can easily keep the kite tuned correctly.
The 4G Screamer strut ends got the "Viagra bulge" stiffeners from the 3G Screamer 10M LTD kite.
The struts have a nice wide backer tape where they are sewn to the canopy, it's a nice reinforcement, the 3G had that too, but it's worth mentioning.
I like the 4G Screamer graphics but I still think that simpler is better so I like the look of the original all blue Infinity and the all yellow Judge kites best.
I also think that no kite companies should use white canopy material anywhere, it seems to often stain, I have not had that happen on an Epic kite, but I'm sure that's just dumb luck.
Been raining on and off and not blowing since the kite got here, so I've not flown it yet.
But we need the rain so badly, I don't dare complain!
Top

Hello guys,
I just read the review that Mr.Oldnbroken did. Just so you know these are the PULLEYS we are using on all 4G EPIC KITES and these are the Neoprene that covers the CLIPS on the ZIP TIES of the "One Pump Valves" system. And of course these are the colors the 4G SCREAMERS (7/9/12/14m) comes in.


P.S. Hopefully Mr.Oldnbroken you get the chance to test the SCREAMER 12 you just got as soon as possible and let us know what you think. 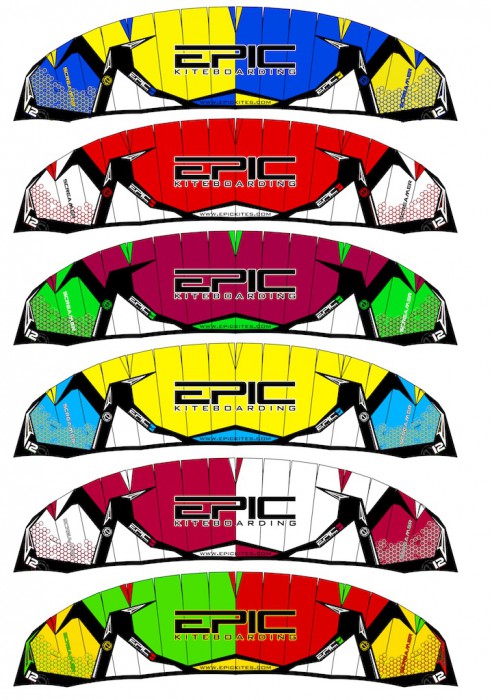 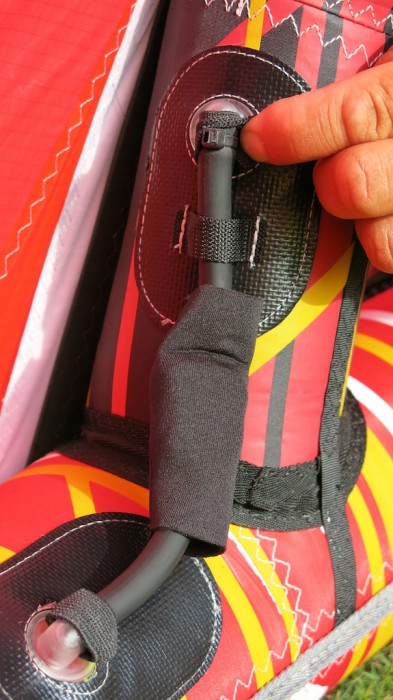 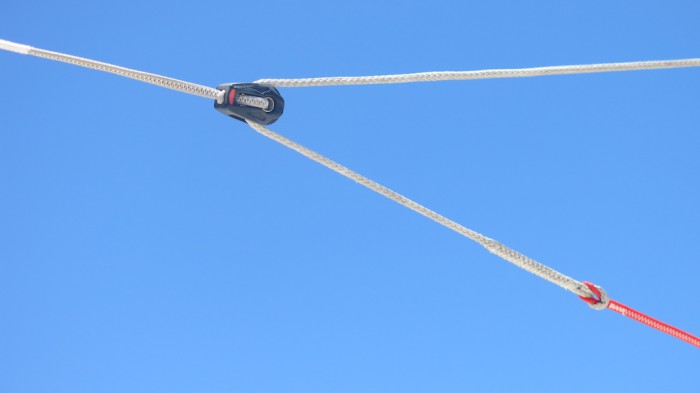