My kites are full of valve air leaks. Its time to tear all of the valves off and re-glue them. What should I use to clean the old glue residue off and which is the best glue to re-glue?
Top

None.
Seamgrip or Aquaseal is probably the best, but you will get millions of microbubbles that appear when it cures.
If you have to remove them, save some money and get the valve traps.
Top

NYKiter wrote:None.
Seamgrip or Aquaseal is probably the best, but you will get millions of microbubbles that appear when it cures.
If you have to remove them, save some money and get the valve traps.

And when you use a valve trap, be super thorough about getting all the old glue off the valve and the bladder and nothing will work better than isopropyl alcohol in the highest concentration you can find. If you are lazy about this it will leak--I won't admit how I know this...or maybe I just did....

And do an honest appraisal. If you have enough valves leaking or delaminating on the leading edge that you are coming close to the cost a new bladder, just get a new bladder. Hell, if you are half way there, get a bladder. They aren't that expensive, and it's worth it to know it won't start disintegrating after you dump a bunch of money sticking valves back on. This was an expensive lesson for me.
Top

perroloco wrote:My kites are full of valve air leaks. Its time to tear all of the valves off and re-glue them. What should I use to clean the old glue residue off and which is the best glue to re-glue?

Before you put on your new valve clean both the bladder and the old valve with rubbing alcohol (you don't need 100%, 97% is good enough though right now I have been using 70%). You can also lightly sand both the bladder and valve to ensure a good mechanical bond in addition to the chemical one but I don't always do this. To restick the valve use 3m 5200 fast cure, that's the red tube, the blue tube cures in 7 days be careful get the right kind. I have done dozens of valve sticks and never had a failure. I have one fuel 13 (it was a good condition 2004 that I got for cheap) and the first time I pumped it up, it held air for about 2 minutes and then every single valve came off. I did a compete 13 valve restick two years ago haven't had a single leak since and it is now my main daily kite. To stick the valve apply a light code of glue stick the valve and then weight the thing down with some cylindrical object about an inch or two in size, you want the exact right size so the cylinder presses around the valve and then place a few pounds on top. The weight will ensure a good bond and squeeze out any bubbles. 3m 5200 says it will be fully cured in 24 hours but it will be cured enough to fly in about 4 hours depending on your temperature and moisture (it cures via water vapor). I usually do a valve restick before I go to bed and then fly the kite the next day. Some people use aquaseal but I like 3m5200 better. You can find it at your local hardware store (or ebay if your nation doesn't stock it locally). You will have to keep it in the freezer after your first use otherwise the tube goes bad. There is no cap tight enough to keep it from curing once you have opened it.

Valve traps and valve replacement stickons are very nice, you can fix your kite and be out on the water in five minutes, but at about $15 per valve, compared to $15 for a bottle of 3m5200 which does hundreds of valves, sometimes it's just not cost effective especially for older kites, the valve replaements would be worth more than the resale value.
Top

carmo seal
This is a gel glue that like bike inner tube glue melts the two surfaces slightly so that when you join it REALLY bonds:
I think the correct term is vulcanise , sorry spelling?
I have no idea if this is available everywhere but easy to find in Europe.
I am mister bladder valve and patch repair, having always bought cheap old kites.
I will never use anything else, NOT to say that another product may or may not work but ALL the others I could get did not hold up!!
I use a q tip dipped in acetone to remove valves, super fast, just use a little.
Clean BOTH surfaces with alcohol as pure as you can get.
Follow carmo seal instructions.
As I have the bladder out, I also add a valve dough nut, meaning cut some bladder material with a hole to fit the valve and overlaps slightly on the bladder, just for added air tightness.
I also patch sometimes BIG seam rips or holes with it.
I do not work for the company and have no affiliation just a product that does what it is supposed to!
For me the test of poly glue for bladders is a hot car. Many seem to hold but even protecting kites from as much greenhouse effect in a car they fail, not carmo in my finding.
revhed
Top

revhed I dont like glues that melt the polyurethane the reason is it can create wrinkles, that's why I like 3m5200 better, have you noticed wrinkles from this carmo seal glue?
Top

buy a valve clean the area with alco and stick it on. I just did an RRD this morning.

Once you glue the bladder is F'd, You can not stick a new vale onto the glue.
Top

Ive used both aquaseal and 3m 5200. Def make sure you get the 5200 fast dry. The reg takes forever to dry. I took a few pieces of pvc pipe slid inside each other, just the size to fit around the valve then set a weight on top untill the glue dries. Works like a charm. Havent had one fail again yet and i kite ond snow and water so temps vary.
Top

I've used 3M DP 8005 on both the inflate and deflate valves of my 2009 and 2008 GK VSonics. Both repairs have held up for two and three years (respectively) so far.

This is a structural adhesive formulated especially for polyethylene. It even has little micro beads in solution to ensure the right spacing! Somewhat expensive though. 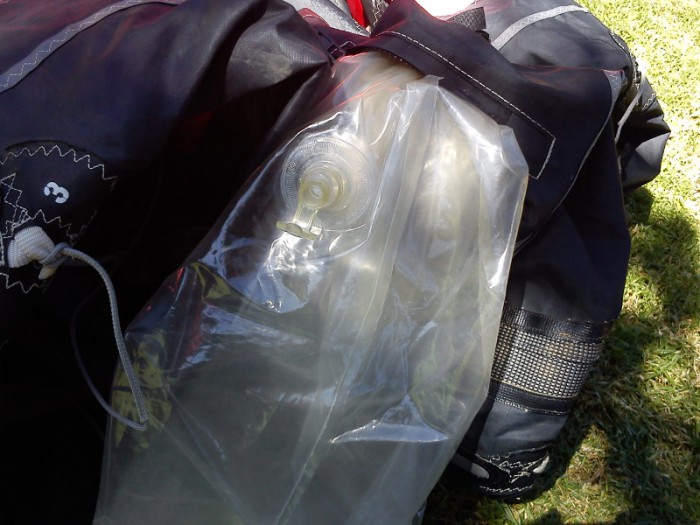 do you need to purchase a 3M cartridge applicator to use it???
Top
Post Reply
26 posts