The following thread on KF was just the most recent discussion of one of the many problems related to the conventional (industry standard) "hook and loop" rider-to-kite attachment system.

In this thread, I stated:

"In the last 13 years of closely observing the evolution of the sport of kiteboarding and of the design of the equipment, used to control the kites and kiteboards, I have come to the conclusion that there is a need for one more "evolutionary" step... that step being, the development of a "kiteboarding- specific SHACKLE"... and this shackle, to be used instead of a hook-and-chickenloop, for about 95% of kiters. The small minority of expert riders, who actually perform "unhooked" maneuvers would continue using the conventional hook-and-loop system.

Mainstream kiteboarding has been around for about 15 years, and "conventions" are hard to break, but, based on the history of the many problems that have been encountered with the "windsurfing-inspired" "hook-and-loop" attachment system, the time is ripe for the development of a "shackle" designed specifically for kiting, taking into consideration the strengths and weaknesses of "off-the-shelf-marine" shackles, which have been used in the past.

Haven't we had enough already of crushed fingers, accidental releases, line-and-hook tangles, not to mention the compromised "throw" of our control systems, along with other wear and tear problems due to the hook and chicken loop devices?"

So, let's give it a try... and see if we, members of Kiteforum, the largest group of online-kiters on the planet, can come up with a design for a kiteboarding "attachment device" (most likely, a type of shackle) that will be an improvement in functionality and safety over the conventional "chicken loop/bar-hook" mechanism. If we are successful, then, maybe the manufacturers of our kiting equipment will begin producing the new and improved product, to be used by the majority of kiters, rather than the "one design fits all" 'hook and loop' product that presently dominates the market.

I think that the first step would be to list all the good qualities of the conventional "hook and loop" system, so that the design that we hope to develop will not fall short of including these characteristics in the design. Examples of this consideration would include (1) the ability to quickly and easily connect the rider to the kite and (2) the ability to easily connect and disconnect the powerline to a fixed object in the performance of a "tethered self launch". It might be challenging to duplicate these 2 characteristics in a shackle design, but let's give it a try.

There already exist a number of reliable emergency release devices, based on different mechanisms, and we should begin by considering modifications to such devices to be incorporated in the "shackle" that I propose that we design.

I have a lot of ideas, but would like to hear the opinions or other members on this forum. Let's put our heads together, as we have in the past, and try to "progress" kiteboarding... and at the same time not fall victim to... as they say... "throwing out the baby, with the bathwater".

well, that would lead to replacement or rebuilding thousands of harness spreader bars

we had that in 2001 already. fully spinnable bar with safety, front lines untwisting.

eree wrote:well, that would lead to replacement or rebuilding thousands of harness spreader bars

Now, that is the best case for motivating the manufacturers to get in on this new device...........$25 per kiter! The bar is the easy part to design.

Toby, good to have you onboard, with the project... you are right that we had the kind of a connection system, and that is exactly what I am talking about.... BUT I am talking about the new improved edition, where everything works right, and especially where the rider does not have to hunt for a little ball or lever to release everything in an emergency... and where the shackle actually releases under load, 100% of the time..... good times though, with the old stuff!
Top

eree wrote:well, that would lead to replacement or rebuilding thousands of harness spreader bars

PLEASE don't take this the Wrong way eree ; i got a Bunch of respect for you, but
it's exactly That kind of attitude which limits progress !

I used one of these, (below) and hook in above the chicken loop ; it
pulled the entire bare the length of the loop, closer to me. Then i extended the 8mm
cord Longer, to give me a Longer travel and it worked Good.

I didn't need the hook on the spreader bar
any longer ; so that twisting moment just went away. Riding Un-Hooked might
be a problem ; but i didn't do that anyway.

Is that a Better way (?) --No-- ; but it worked for me and it's probably one
of a dozen of Other ways to hook up to your kite if Ya keep an Open mind ! 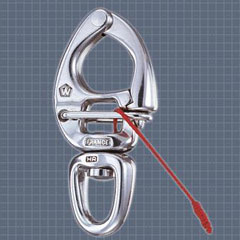 Line snagging could probably be handled with a flexible plastic shield over the open part of the hook or a more streamlined design. Most any mechanism with an easy release is going to be subject to some sort of unintentional opening. My safety leash has unlatched on rare occasions.
Top

We had two balls on each side of the Wichard.
Just slide down the depower and you hit the balls and it released.
And it was the Wichard that didn't get stuck.
Plus a release for the Wichard if something is wrong with the Wichard.
Top

as you know kite manufacturers are allergic to standards. We don't even have standard kook proof connectors!

if removing the hook ever caught on you would have a choice of a dozen different quick releases. They wouldn't use whatever we designed here even if they wanted thanks to patent laws.
All that said . . . the wichard 2773 is an excellent solution just buy one and convert your current harness. You don't have to wait for anyone.
Top 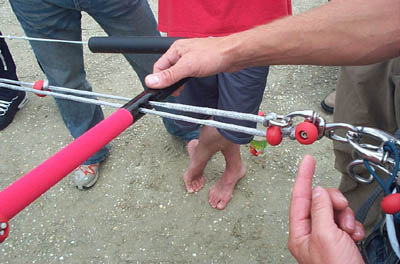 I'm quite happy with my hook and CL.

Haven't found any negatives so can't see why it needs to be changed, and I find that it actually works very well.

You say that a redesign is overdue - have a look at a CL from 2004, there is a big difference from then to now.

I would not use a winchard as they are too small and fiddly to operate in an emergency and will still be susceptible to maintenance issues and accidental releases just like any mechanical device. I like the current safety release systems from the likes of Naish and North which are easy to find and operate, even in the cold with thick gloves on. I prefer simple safe designs.
Top
Post Reply
921 posts