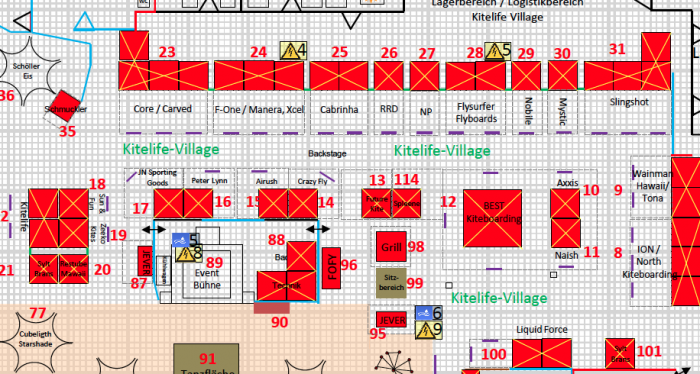 Thanks Toby for starting this thread.

Peter Lynn Kitesports will be there with our full range of LEI Kites and also the Magma Foils.

Come and test the

I will be there together with our designer Pepijn Smit and a few of our team riders to answer all your questions.

Also we will be giving away a 9m2 Swell complete with bar to a lucky contestant if they can guess how much line is in our "line jar" at the tent.

See you all there,

Here is a list of what we will bring for testing:

Plus, we will have the whole 2015 board range and kite range in our tent to
showcase.

Stop by the CrazyFly tent for a chance to win a brand new 2015 Sculp kite!
Top

Without a doubt one of the greatest events on the calendar and our highlight of the year.
Preparations here at AIRUSH Germany are running at full speed and boards and kites are still flown in from across the globe. Fingers crossed, everything will arrive just in time.
Products that we will have available for testing on the beach and/or on show at our booth:

We will also bring as many 18m Lithium ZERO's as we can still squeeze into our van.
So if the wind forecast is poor, you won't have to worry. With our ZERO kite and a Sector board you will almost always be able to get out and your trip to St.Peter won't be wasted.
In the rare event that the sea at St.Peter lies in front of us like a milk pond, we have our national and international team riders at our booth.
So drop by and get yourself that selfie with Alex, Bruna, Ozzi, Julien, Bas and Co. and check out our latest team video which will be shown in the AIRUSH tent.
Hope to see you all there.

F-ONE tent we should have:

Spleene will present the following products and you can test them.

And we will exhibit a preseries Spleene Hydrofoil.

We are looking forward to see you at the event.

What is the brand Axxis?
Top

Tona will have a demo booth at the event. Come by and check us out. We would like to meet you.

We will also have Straps/pads and Boots but we recommend that you bring your own boots if you have.