All of it
North and Race boards
North twin tip and directional yummyness.
Surfboard and strapless play stuff.
Brand Affiliation: I am a North snowkite athlete.
Location: Utah ish
Has thanked: 0
Been thanked: 0
Contact:
Contact Billy B.
Website

And as always with the 2011 18m you can just lock the bar and leave it. The 2015 needs input through out the jump for the best landing. And on my 2015 15m or 18m I can spend tons of time in the air and travel 60 meters down wind easily but without a helo loop before landing the entrance speed is for big kids...

The 2015 is super bad ass in all its newness....the bar feel is super neat, and compares to the mechanical feel you get from foil kites. I have flown the Chrono in 15 and 18, and flysurfer 21 also. and the Dyno does not make the same forward speed as these kites in under 10-12 knots

I had no problems doing airstyle tricks on the 2015 18, or 15. surface tricks,slides are even easier since the kite is quick, And I tend to use the narrow bar setting on the 2015 kites but run the bar wide for the 2011.

On a formula board, the 2015 is amazing, and including Ozone edges, I have not felt as fast on any other pump up kite, the trimming is great and you can get by with out a race bar and be comfortable with just stock rigging, which is sweet if you like to ride several boards, or keep one kite inflated, and ride variable winds.

Here I may ride race board or nugget for the first and last hour of a several hour session as the wind builds and fades. But switch to directional, or twintip as the day builds. The 2015 kite is for sure better then the 2011 for this type of riding, not only does it have a amazing high end, but it is almost to playful to be a "race" only kite. Last year I almost always flew the Dynos (13-18) on race rigging, but this year I have been leaving my race rigging in the bag often on formula gear. And when everyone shows up to ride 12m I just grab a twin tip and ride airsyle for a little while. which I did not enjoy as much on last years Dynos, or I was changing bars out, while having a break.

The 2015 is for sure the best evolution of the Dyno to date. It is smooth fast and sure footed. the kite reacts just as expected and only losses its shape when un usably over powered.

The feed back I have gotten from demoing the 2015 dynos 15 and 18 has been all positive, except for the lack of one pump, which with this new bridle to strut connection seems even more necessary to me? 10 PSI for the struts and 8 for the leading edge.

If I was a airstyle only rider then the 2011 would be my go to kite, as a mater of fact if I am only planning on riding airstyle that is what I pump, but any other day the 2015 Dyno is in the air, so I can ride how ever I would like, sure the kite may not drift down a wave like the juice, but it does some many things well that I am very very pleased.

Robbie did I miss any of your questions that have not been answered?

There is indeed a four line warning, and a difference in flying characteristics on four or five lines. I almost always fly the five line set when lit up, so I can use the fifth line safety, But I fly it on four lines with out problems. 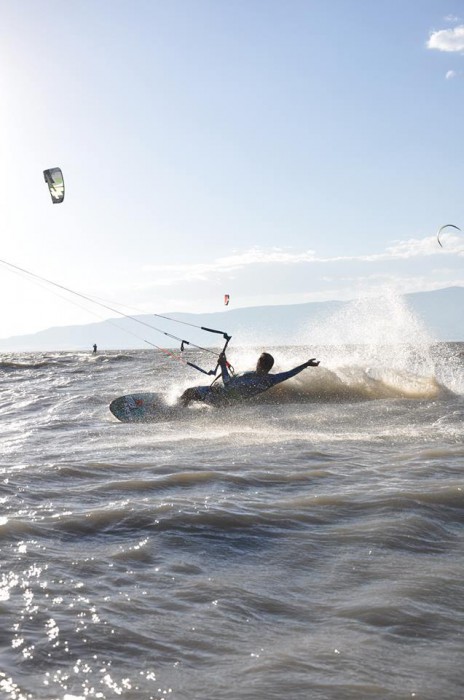 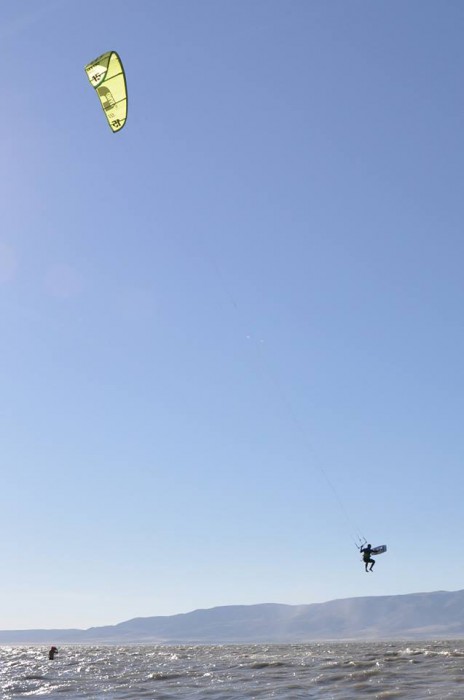 What is your take on static low end Grunt of the Dyno 18?

What is your take on static low end Grunt of ye Dump 18?

Just a little movement to build apparent and your good on the 2015, Since I am typically the light wind guy at my spots, My skills may make up for lack of static. I think the Dyno is much faster then the edge 19 what do you think?

If it is a hack, what are you complaints, I have not heard any locally, so I would love the input?
Top

Typo. Dyno 18. Just curious what you thought. You answered my question. Thanks

... hey Billy, thanks for the review and info!

It appears the struts are still made of the D2 material which makes me a little nervous with the struts being pumped up to 10 psi and added to the fact that the bridle is attached, will the struts handle it and more specifically, will the material handle it over the life of the kite??

To explain my reasoning behind my question is, I have a mate who reckons his 2013 Dyno flew better with the struts pumped up hard and I think he regularly pumped them up to 8 and 10 psi. I on the other hand owned a 2011 Dyno which split many times so religiously kept my struts at 6 psi. I tried it a few times (nervously), but my 2013 flew fine with 6 psi so I stuck with the recommended pressure.

Anyway, unfortunately my mate split the middle strut along one of the long seams near the valve and while we were fixing it I noticed the material looked a little bulge in the smaller segmented parts of the strut. To me, it looks like he'd been pumping it up too much, too many times.

So, if the 2015 is the same, ie constrution and materals used as the 2013, will it stand up to the extra load of the bridle attachments on the struts instead of the LE? Maybe my logic is wrong and now that the load is spread out, and it is in fact less load,,,, just guessing here, I suppose only Ken Winner would know????

Can you tell if the construction or indeed the material is different in the 2015 to the 2013 so it can stand up to the 10psi over the life of the kite?

Thanks again for your time,

I will look more closely at several model years strut construction, and let you know.

So far my 2015 seem great after repeated use at 10 PSI. I also have pumped previous Dynos struts to 8 psi in some conditions, but never 10.

Danny may know the construction or fabric info for the struts, I can only compare what kites are around here and speculate, To be honest I haven't even compared the struts fabric just the shape..
Top

So far my 2015 seem great after repeated use at 10 PSI. I also have pumped previous Dynos struts to 8 psi in some conditions, but never 10.

Danny may know the construction or fabric info for the struts, I can only compare what kites are around here and speculate, To be honest I haven't even compared the struts fabric just the shape..

... you know, there is every chance that my mate went above 10 psi as he didn't have a guage either (guage got smashed in the back of his car) plus he thought more was better, not alway hey!! Ironically he flew the kite with no middle strut and it flew fine so now he backs off on over pumping.

I had another good look at the pics you posted of the struts in a previous post and they look like the same construction as my 2013 so logically speaking, its had no problems so the new one shouldn't either. Just curious is all !!!!

The upstroke of the 2015 is the best to date. If you look at the photo I posted jumping you can see the kite is still climbing as I am into the first nano second of taking off in the photo probablyu another 8 meters of height at the peak. Just like the 2013 the kite will climb fast enough to flap and distort just a little if you don't have back line pressure ( like a hot launch). I would assume that is as fast as you can get it to climb with out total failure...

Going to ride Dyno 18 and formula gear in about 6 knot right now...
Top

and good to hear the upstroke power is still there!

Thx for the info Billy.

7 PSI is what I do to my kites I think.
Had an 2011 18 exploding on beach.
It will break at the zipper on LE...have a closer look there, the stitching is not good, since the light and thin LE material breaks due to too many stitches.
Give it to a repair shop and have it reinforced.

New Dynos should not have that.
Top
Post Reply
30 posts