And this year I have tested a 2015 Cabrinha SB 8 mts, for six days at Jericoacoara.

I have tested the 2015 8 mts in 25 / 35 knots. I really liked the kite overall. Very fast. Strong low end pull. Light bar pressure. Great turning ability and upwind riding. The new bar is very good, a lot better than the 2014, the riding position is very comfortable . And it didn't tend to backstall. The wind range is amazing.

On the other hand, I don't like the 2014 10 mts very much. The bar pressure is very strong. And the kite tends to backstall in lighter winds.

I don't believe the differences you think you are feeling are just the result of design.
Riders i've talked to don't feel any real difference.
Low end and bar pressure are basically the same.

It is my understanding from a design standpoint, the 2015s should have less tendency to backstall. Basically, if you ride unhooked, Cabrinha has previously recommended putting the back lines on the last knot (the one from the kite) to correct for the backstall.

Hope this is helpfull
steve
Top

I cannot tell the difference either. The 2015 kites feel very similar to 2014.

Personally, I liked the 2014 bar but the 2015 bar has some improvements. However, I keep pinching my fingers against the bar and the stopper when letting the bar out (due to the increased recoil spring pressure). And I am still trying to find a tidy way of winding the lines round the bar.
Top

tr3v...don't think it's because of "more recoil pressure" The recoil is 5cm longer in 2015 vs 2014 for people with shorter arms. So, I think you can easily solve your problem :=)
steve
Top

experienced1 wrote:tr3v...don't think it's because of "more recoil pressure" The recoil is 5cm longer in 2015 vs 2014 for people with shorter arms. So, I think you can easily solve your problem :=)
steve

Thanks, for the offer but I will keep my "long arms"

The spring is definitely stronger, and the extra 5cm probably just means I need to get used to it.
Top

Brand Affiliation: none
Has thanked: 11 times
Been thanked: 5 times

I now fly 2014 Cab SB. Am still puzzling about buying the 2015. If you read the tests and compare the windcharts of the 2014 and 2015 SB
- In 2015 version backstall in light winds is more or less gone
- low end has improved further, so you need smaller kites with the same amount of wind.
- and of course the safety system is now best in class in the market.

Well just bought 2014 SBs 12 and 7m at 35% discount with 2015 bar... Not too woried about the backstall as all my kites do this... Great for reverse launch actually. I prefer to trim for perfect fit than just move a knot and get more sluggish control over the kite. I'll see if it is a problem
Top

conditions were extremely low to no wind steadily increasing
to 25 knots in small chop.

What I felt compared to my previous years kites:

2. Complete loss of any backstall in light winds or heavy winds.

4. Can't comment on bar pressure, I don't mind it, actually like some.
didn't feel much of it.

5. Seems to jump higher, better. Or maybe I was getting overpowered

Buddy and I fly 2014's and 2015 Switchblades. As far as back stall on 2014's, I can pull any kite out of the sky so a little rear line tweaking and I find the 2014's are perfect. Somewhat comical that this is a desirable feature that I definitely want and I use this on other kites such as the Flysurfer Chronix and my Ozone Chrono's... Back stalling is a sign you have taken all the lift the kite can possibly produce and more, so tweak back line pig tail positioning, or in light winds, time to add a little depower. Carbinha bars have a very narrow range of operation so using other bars with long throw (CompStick etc) will expose the Switchblades full range of operation without iterative set and test.

IMHO, I have friends who don't consider that lines stretch and kites need tuning. They set to factory settings then fly and sometimes it works and sometimes it doesn't. We have riders who would purchase new kites/lines as opposed to going through the process to adjust their existing lines/bridles.

2015 bar was an improvement over the 2014 bar finally going to identical front lines and attaching the flag out line to the bottom of a front line, although the one big problem I found was you are unable to reset the bar after flagging out due to the front line and flag out line bungy getting stuck inside at the internal swivel. I took it apart and found tolerances between the swivel and "uni line" really tight so I replaced the chicken loop and depower system with an Ozone Race chicken loop and kept the adjustable bar itself. Look for a change on the 2016 bar

Don't believe me? Flag your kite out and let me know how long it takes to reset. Others have reported the same issue.

Buddy purchased 2015's and is somewhat disappointed. Negledgable difference in kites and he feels one kite in particular does not pull evenly (pulls to the right) so I need to look at his bridle settings. With the kites on top of each other, I'm struggling to see any difference in 2014/2015 so I plan to stick with what I have got.

In general, the switchblades are bulletproof kites and the perfect quiver for me is 12/9/7. I have a 14 but IMO its a really heavy 14 (it's a big boys 12M) and I believe I would be better off with a 14 in a Drifter (3 struts). If they made a 13M, I would look at switching my 12/14 with 11/13. The feature that stands out for me is their ability to soak up large changes in wind speed. I feel confident being over powered on a switchblade and its ability to depower/handle the gusts. Awesome kites. Average bar (again). Hoping Cabrinha sorts the kinks in their bars by 2020.
Top

tr3v wrote:I cannot tell the difference either. The 2015 kites feel very similar to 2014.

Personally, I liked the 2014 bar but the 2015 bar has some improvements. However, I keep pinching my fingers against the bar and the stopper when letting the bar out (due to the increased recoil spring pressure). And I am still trying to find a tidy way of winding the lines round the bar.

Try this way I have come up with, works great!!
Rotate screen if you can so chicken loop is at the bottom. My computer keeps flipping it sideways and pissing me off.
Start winding by hooking chicken loop on the bar end , now with chicken loop on right side grab all lines and PU tube, etc, with left hand and make a wrap around the top. Now that you have made your first wrap around the top, slide right hand up to top of bar and with thumb hold spring with pu tubing to the right so you have a nice clear space to wrap your bar as normal . When I am wrapping any bar I like to stick one end into my stomach and pull the lines nice and tight every other wrap, this really keeps things tidy and eliminates any chance of line slipping of bar ends . When you get close to the end of the lines and need to lock the lines up , just flip either the chicken loop or spring out of the way , bungee as usual and the flip spring or Chicken loop back on bar end..
REMEMBER ALWAYS TO BE CAREFUL NOT TO KINK TUBE. That first wrap does not have to be very tight , just enough so spring and chicken loop stay on ends. You will get the feel after a few tries.. 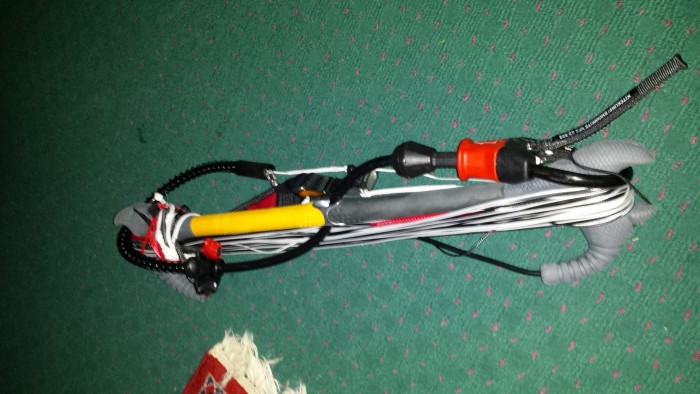