Is this a good destination for someone starting out/still learning to ride? Certainly lots of choices for instruction...
I realize it's not flat and shallow but neither is my home spot so I'll need to learn to cope with those factors sooner or later. Thanks.
Top

It's definitely not an easy spot to learn, that's for sure. But possible. I'll PM you some thoughts
Top

Cabarete can get pretty crowded, but it's relatively inexpensive. It's not a great beginner spot IMO.

Turks & Caicos is far better for beginners, but it is more expensive (for lessons, groceries, housing, everything). But if cost isn't as important for you as having shallow, open water with steady trade winds and a perfect learning environment, I recommend Turks & Caicos over Cabarete.
Top

I too recomend a different location. The beach is really narrow at cabarete with palm trees all over it. Seems like the locals dont know how to swim so they close to shore and throw huge tricks and have little regard for other kiters and lessons. If you do learn there though. You will be an expert at riding in traffic. Food and lodging is dirt cheap. I recomend hatteres or south padre island. South padre island at la quinta they have a full week lodging for $500 w breakfast buffet. We put 4 people in one room and spent $150 each.
Top

I learned here 3.5 years ago. I am working on handle passes now. I think it is an awesome place to learn if you choose the right school. There is wind 300 days per year and it is not always crowded. In fact, right now there is almost no one here and it is the height of our windy season.

If you do decide to come, check out Laurel Eastman Kite School in Cabarete Bay.
Top

I learned in both TI and Cabarate, dec-jan 2013-14. TCI is the best place for first sessions, certainly - straight onshore wind, very shallow water with silky sandy bottom for miles! Launch a kite, walk out a hundred yards, fly the kite. But winds are lighter than Cabarete (unless summer), and lessons are about 3x the price (lodging is a similar multiple). I never got up on a board in TCI, but did learn how to keep a kite in the air in 8mph of wind, and that time with the kite paid off very handsomely later on. Lessons in TCI are better than in Cabarete, in my experience: less wind and shallow water means the instructor is next to you and the student must learn to use technique instead of raw power.

Having said all of that, Cabarete is an essential part of the learning curve - or at least it was for me. I had intensive instruction in TCI, almost none in Cabarete - there, it is sink or swim. But if not for that somewhat harrowing experience the first year in Cabarete, where I became a little more confident and somewhat less afraid of the kite (still fear it out of respect), I would not have had the confidence to kite on my own in my home waters. TCI was technical, Cabarete was a confidence test. I have kited since in both places again, and although I still love TCI for the beautiful placid waters, if I had to pick a destination now, it would be Cabarete.
Top

It has been awhile since I went to DR, but I just wanted to throw in that it is a third world country and expect it to be that way. It can be a little exhausting. Crazy drivers. Pollution. People trying to scam foreigners out of money. I think cabarete is not a cool town to be in. Separate from kiting.
Top

Always painful to see the newbies struggling with chop in Cabarete..
You better find some destination with shallow flat water - you will progress much faster..
If you are set on DR, I believe there are couple of nice spots within 30-60min of Cabarete.. Ask your instructor to take you there for the first few lessons 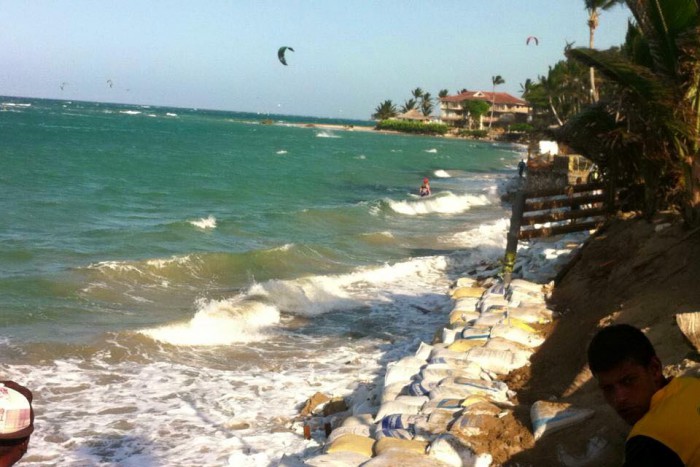