can someone keep us updated on his current status please?

I just read this:

Wishing him well and that he will be back 100% 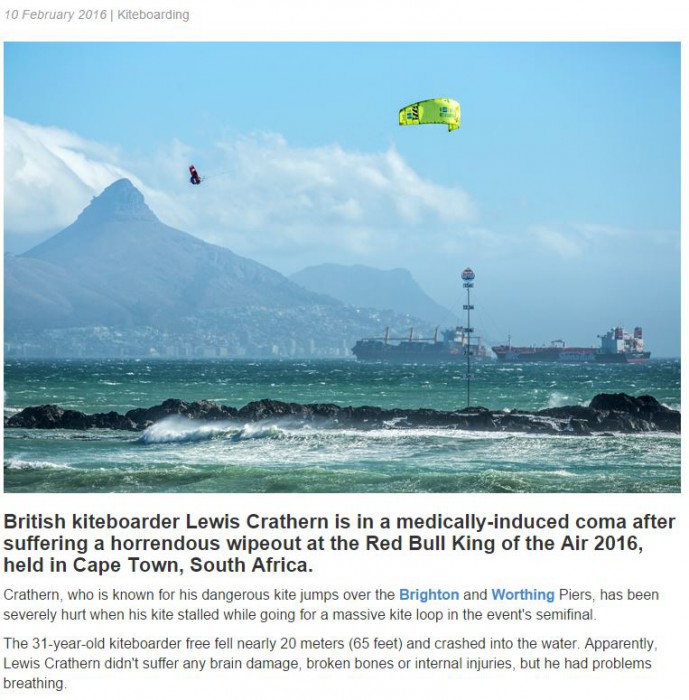 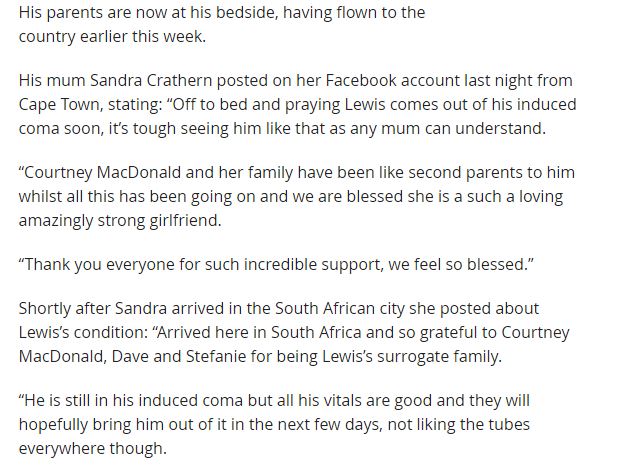 Thx for that Chris.

Here the video of his crash...I must say, big thx to Reno Romeu who immediately went to him...which is not really normal within a competition, since the riders are in competition mode and fully concentrated.

Reno's immediate action saved Lewis 30-60 seconds I assume before other helped would have arrived, since it is really hard to see if Lewis is moving or not...might have been different from the spectators or rescue boats angle.

Posting from his mum about the circumstances:

We are all rooting and praying for you Lewis! Get well soon, we know you are strong both physical and mentally, and that you are surrounded by loads of love from your parents, Courtney and family. You also have all your friends, fans, the whole kite community and more sending you positive thoughts, healing vibes and praying.

As a side: Just wanted to add Red Bull Events that it would be good for you to issue an official statement, it has been 4 days! The whole community is worried and understand initial media freeze, but it has been long enough for you all to issue a statement. I know Red Bull you will be taking the rescue efforts under review for the ‪#‎redbull‬ ‪#‎kingoftheair‬ and revise to improve the efficiency and processes in such extreme conditions! With those massive waves a jet ski should have been on stand by in the water, especially with those massive gusts coming through as well. It would have reduced rescue time significantly...

Here are the times logged from the the few images I took from when Lew crashed, to the image when he reached the rescue boat with extraordinary help from Reno his fellow kitersurfer, to the time CPR began... (was logging time so we could report accurately to the hospital)

In summary it took too long!! Why did the rescue boat take so long to go out, why was there no jet ski...?

A Massive well done to the Paramedics on sight for their amazing work in reviving and stabilising Lewis enough to get him to the hospital!
Top

Skis with fully respected riders (kiter and rescue experience) on them.. Like a tow surfing kitesurfer with surf lifesaving club experience - if anyone needs a hook up..

The decisions are complex and can potentially make things worse - experience is king.

Even so the guys in the ribs had to be super cautious we fully know that.. lines in the prop of a rib, same would go for lines up the intake of a ski which will immediately cut the engine / accidental contact with rider / all thrown out the rib by a wave...
Top

am I the only one that thinks 2 mins from reaching Lewis to performing CPR is actually not a bad time? I'd think that most drowning victims wait much longer. I'm certain those 2 mins felt like an eternity, and if they can learn from this and make it faster - awesome. But 2 mins to me seems like perhaps an acceptable time no?

These guys have big balls for sure. I wish everyone that got hurt a speedy and safe recovery.
Top

longwhitecloud wrote:I was very surprised that they used ribs - especially in those conditions (swell)

we have a flat water spot that we held a speed comp in 2 years ago, we lucked out with 40-45knots, a rib with 2 people in it was flipped in the wind. As you say, full on rescue skis need to be in place, 0-40 knots in 5 second.
Top

KiteCulture wrote:am I the only one that thinks 2 mins from reaching Lewis to performing CPR is actually not a bad time? I'd think that most drowning victims wait much longer. I'm certain those 2 mins felt like an eternity, and if they can learn from this and make it faster - awesome. But 2 mins to me seems like perhaps an acceptable time no?

These guys have big balls for sure. I wish everyone that got hurt a speedy and safe recovery.

The only problem here is that CPR was not commenced at this time - if only it was. In fact he never really received it at all. He badly needed air forced into his lungs and as it turned out he pretty much eventually had to do that for himself. There was no ambubag available in the boat (if any organiser reads this they need to remedy this in the future) and this is what he needed because he was aspirating on the seawater he had swallowed, and was now regurgitating, and mouth to mouth would have been tricky, but also should have been done if only there was a one way valve. Thus he was dragged to the beach without breathing and with no-one breathing for him. On the beach it didn't get any better. Still no ambubag, no mouth to mouth and surprise surprise no oxygen available. The only air he got was the reflex gasps he gave after each puke. Somehow this was enough to sustain his life. I just hope he wasn't hypoxic too long and that his lungs will recover from the salt water and stomach acid aspiration. He will get nasty pneumonia.

In an ideal world, when someone is seen to take such a catastrophic crash, a flag and siren will go off, so the sleeping lifeguards ( I say this after their response to Lasse Walker crash) and fellow competitors can drop what they are doing and rush over. The kiters may get there first and if they do, airway out of the water if it is quick otherwise mouth to mouth if they are willing, would be lifesaving. Then the Jetski's would arrive with a qualified kiter-medic-rescue-swimmer and a portable breathing device, be it a portable regulator or an ambubag - just something to put some air in his lungs if needed. Then on the shore a proper setup with oxygen and medics who have advanced training (take note organisers). And then instead of "staying and playing" (medical term) in the ambulance for ?45mins before driving off for the hospital, they need to "scoop and shoot" (medical term) to go and get advanced treatment facilities.

In summary it took too long!! If it was quick it would have been cough cough splutter and walk off down the beach. Now we have a fight for your life in ICU story.
Top

thx for that. Important is that Lewis will be ok now and feedback like this will lead to better rescue for 2017 or any kite event.
Top

Brand Affiliation: None
Has thanked: 4 times
Been thanked: 62 times

A 2min response is actually amazing in the world of emergency response. I know I work in a chemical plant and I am on the fire, rescue, and medical teams. If there was no Emergency Medical Rescuers on stand by then I see that as a problem. There are far more tools on an EMS truck than basic CPR. In an event such as this you would think Redbull would have paid for at least one truck to be on standby if not more.

I hope Lewis comes out fine and does not suffer any long term injuries.
Top
Post Reply
39 posts