Snowkite Gliding - tell us why we are so stupid

Snowkite Gliding - tell us why we are so stupid

Bille suggested that we start a separate thread to discuss gliding with a kite. I agree that is a good idea.

Bille you don't wish to compare gliding to paragliding. What we do on the snow is what you would call a "sled run." I agree with you that they are not the same. While it is true that you can fly a kite like a paraglider and actually gain elevation, you would be bananas to do so because of safety concerns (only 4 lines on a kite, one chicken loop line connecting kite to rider, harness that is not designed for flight, etc.). Your point of a sled run being lame makes sense, why unpack a wing, fly down and than have to pack it up again. Only a newbie would want to go through so much trouble for such a short flight. BUT, if you could do a sled run over and over again without packing up the wing and the wing also hauled you back up the hill (often making glorious powder turns) then you have something different. That is what we do snowkiting.

While you may not like comparisons to paragliding with snowkite gliding, there are some obvious similarities. The physics of how lift is generated in the wing is the same.

It is a lot of fun, I would like to encourage riders to do it safely. However, there is not much incentive for kite designers to pursue safer designs. The market is just too small. So, for now I am encouraging my friends to glide low and not to glide when the conditions are less than optimal. It is better to live to ride another day.

It is easy for kiters that have never tried the aspect of gliding to just dismiss it altogether (many dismiss snowkiting completely). It would be like me dismissing wave riding with a kite as being too dangerous to pursue and frankly, wave riding probably IS more dangerous than gliding from a statistical basis. I can already hear the flames

I must say...you gliding snowkiters have big balls...it looks fantastic...but I would be too scared of gear failure. I had my experiences...
Top

Why dont paragliding wings have inflatable leading edges? Seems like a good idea to me... - collapsage and all....

i can see the attraction myself to gliding - with the multi dimension in addition to just gliding... I guess gear will develop...
Top

I'm on the board of the local ski hill and when we deal with insurance/lawyers the phrase "inherently dangerous" always comes up as the category that skiing falls under. It means that even if best practices as recognized by experts are followed there will still be injuries - they are just baked in to the sport.

Kiting more broadly is the same as skiing, snowkiting probably more so, gliding exceptionally more so. I'm always reminded during snowkite season of how many factors need to come together to have enjoyable snowkiting - the right snow, high pressure vs. low pressure, light levels etc. It's an even tighter band for gliding (disclaimer - I used to do some beginner level gliding when I rode flysurfers and inflatables, now my standard wing is less good for it and I don't do much but would somewhat like to revisit it. Still do some big sent jumps on snow though).

This guy who dies last week seems like he was doing things mostly right - went to meet-ups, advanced skier, doing his gliding in moderate wind. Started the day doing smaller glides and then staged up. But didn't check for soft landing (forseeable) or maybe didn't anticipate being drifted over a hard area (grey area for predictablity)

So how many data points do you need to know what percentage of the time you may get out of control in the air? 50 low glides? How likely is anyone to get excited and want to go bigger after 10 or 20 low glides?


So, for now I am encouraging my friends to glide low and not to glide when the conditions are less than optimal

This is the most difficult trick of all if it's going to get scaled up as general advice. Some of my friends are cowboys. Some of my friends can't judge conditions for shit. Sometimes they haven't kited for two months. Sometimes (this can be the worst factor in judgement) they brought their new go-pro and want to put something on facebook that night.

Not really advocating for or against gliding really, just saying that everyone needs to take good care of yourselves and each other, think about the examples you're setting.
Top

Geopeck,
I appreciate your thoughtful response.

As far as progression goes with gliding, I am actually advocating not going big. Rather, staying low, hugging the terrain for touch-n-goes, and small swoops. The problem with going high is that any gear failure equals a plummet to the ground.

In the case of the man who passed away in Wyoming, it is hard to say precisely what went wrong, it appears to be pilot error, but without a direct eyewitness report, we can only surmise what happened. He came down hard impacting on his chest from 30 to 40 feet. That would indicate a kite being looped or down looped so that there was no lift and the rider was stretched out in a horizontal position. I would say that his progression would have been similar to riding 2 to 3 foot waves and then deciding to go out in double or triple overhead surf. It was a big leap.

Unfortunately, a lot of new snow kiters see guys flying high and want to do the same thing right away without understanding the risks. We also have some more experienced kiters who only want to go farther and higher, they post their vids on YouTube and others think that is what gliding is all about. I have done the long, high glides, it is actually ridiculously easy to do, but when things go wrong, the consequences are big. I would love to see gear engineered for gliding, but I would say that what we are seeing instead is kite equipment that is engineered to take the stresses of kite looping and long, hard use. No designer is working on gear for gliding that I am aware of currently, so we are on our own.
Top

Could you use a small paraglider or speed wing or something to pull you up/along the hill instead of a kitesurf kite?
That way you would maybe have a little more safety in the air, but it still is always inherently dangerous.
Taking off and landing are always extra dangerous, snowkiting means doing that scores of times in one session. And the rest is taken up by the other dangerous parts, flying in proximity to terrain and maneuvers.

But I would think at least a chute/wing of some type gives more stability and more strings to hold you up. I am surprised snowkiting isn't the domain of a responsive, somewhat smaller/faster-sinking type of paraglider.
Top

paragliders know the most dangerous place to be is not a mile up in the air but between 20 and 50 meters in the air. It's too low to throw your reserve and too high to survive a fall. I guess that's why it doesn't make any sense for kiters doing glides to even bother with a reserve you never get high enough for it to open. You look at dangerous sports, you see sports like kiteboarding, white water kayaking, traditional climbing, all of these sports are pretty dangerous with several fatalities per year. You want to kick up the danger a notch you can go with sports like paragliding, underwater caving, base jumping, big wave surfing. Maybe you want to kick it up another notch, that leaves just wingsuit flying and speed paragliding. Where does kite gliding fit in there? Pretty darn high. You fly too low to activate a reserve and high enough that any gear malfunction is almost certainly an injury or worse.

Go for it tho I love those gliding videos, they are sweet, be as careful as you can be. Kite gliding videos are like watching wingsuit videos for me, the level of danger is so high, it's something I would never do but I love seeing what is possible. I think for those that are gliding the only thing you have to do is make sure you don't encourage newbies to do it. They don't have a good sense of the dangers involved.

By the way pier jumping is also really dangerous, but I don't really have that high of an opinion of pier jumpers. They are just stunting, doing stupid dangerous tricks that don't do much for the sport. Kite gliding is different, yes it's dangerous but it adds a really wonderful dimension to our sport and pushes the boundaries of what is possible, so it's worthwhile despite being so dangerous.
Top

Kite gliding can be made safer. Here is Flysurfer wing with special harness which allows easy riding up and for gliding a paraglider type of harness with attach-points on your sides, multiple lines up, no mixer and paraglider type brake steering.

Why not talk to Ozone, Flysurfer, Gin, those companies who make PGs, Speed Wings and kites. They know their stuff. You would have to sign a disclaimer longer than your will, but they might sell you rig, or inofficially give you pointers or mod your stuff.

There is one inherent difference between a good kite for climbing (small, fast turner, long lines, loop-able) and a good glider (large, short lines, slow turner), so at the extreme end, you will have to take choices. But for open landscape like shown in the vid, and where the poor chap had his accident, there are solution loads better than a LEI with a climbing harness.
Top

fernmanus wrote:there is not much incentive for kite designers to pursue safer designs. The market is just too small

Have a look at the Open Air versions from Aeros. They are reinforced snowkites made for gliding. 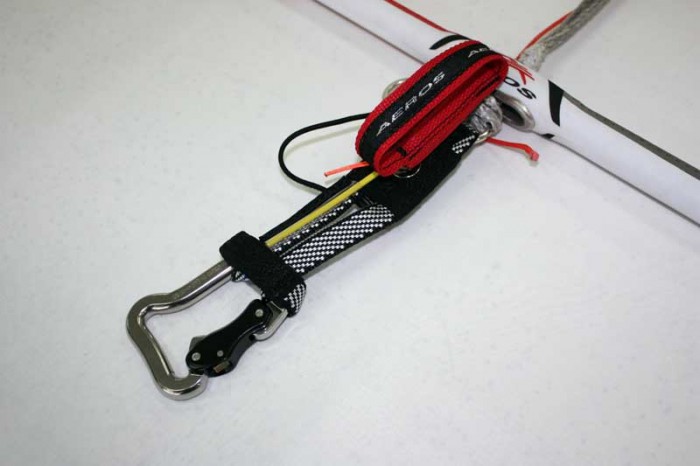