Andokite wrote:Marek, have you tried the Apollo on short lines (15-18m) ?

Short lines allow bigger kites to be flown which is an advantage on downwind legs on the race circuit... 15M Line with 15M lines vs 12M kite and 22M lines. There are still sub 10kt days where I will pull out my 18M kite with 25m lines.

My 15M foil is coming my "go to" kite in all conditions and I will swap between 16M/19M/22M lines depending on conditions.
Top

BraCuru wrote:I compared Apollo with the latest race foil kites with the same hydrofoils. Apollo can't make similar upwind. No mercy. However in downwinds it performs comparably.
I believe that high aspect inflatables will be developing. Neil Pryde is going to release FR:X kite soon. Hope it will be the next stage of Apollo development.
BTW - Apollo has not been registered in IKA:
http://internationalkiteboarding.org/in ... cing-kites


Yeah, but look at those weights! The FR:X 16m is carrying around 1.5-1.8kg more weight than comparably sized foil kites!!!

I think that alone makes a competitive inflatable impossible...or at least not possible given the current level of durability that Cabrinha/HP is building into its high aspect inflatable offerings.
Top

What is the FR:X supposed to be for?

Is it replacing the Switchblade or an FX upgrade?
Top

Why is NP competing with its own Cabrinha brand? or is this replacing the Velocity and building a new class to enter into Olympics? 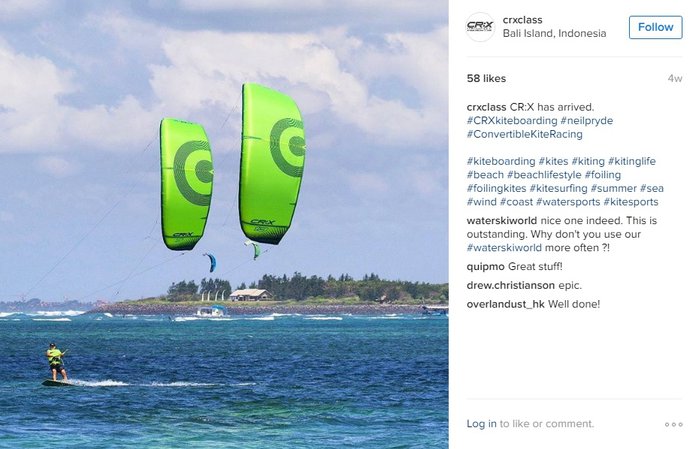 I think they decided to use the NP brand because of the heritage of the windsurfing RS:X olympic class.
Top

Pretty raw but here's some first ride footage from yesterday on the 8M Apollo.

The riding is nothing special but I got a chance to try this kite for the first time yesterday at the Hood River event site. Winds were pretty crappy with massive holes and gusts. I need to get some time in on this kite in better conditions before I can form an opinion on it. I'm used to riding Cabrinha FX's so I haven't quite figured out the timing for how this kite jumps yet, hence lots of crashing. Overall I was still impressed by how it did yesterday.

Was out Sunday on 12M switchblade. We had and 8M Apollo with us just in case the wind picked up, we wanted to try it. The wind was decent but didn't ramp up, but being smart-asses we pumped up the Apollo just to see if it really measures up, if we could kite. Wow. Not only could we kite, we went upwind, really easily. It was weird as hell. We were on twintips, stayed on the same boards as with the 12M and were very impressed at the Apollo's performance. We didn't try many tricks or jumps, just spent about 15-20 mins getting a feel for it. The wind range on Apollos has to be ridiculously large, more than on any Cab kite I have used. I don't foil, so can't compare, but it is a really impressive kite.
Top

Compared to foil I would think that turbulence behind LE would pose bigger performance loss than extra kg of weight. Several years ago there was a development to have double skinned canopy. Apparently going nowhere due to complexity of manufacturing?
Top

Brand Affiliation: Local team rider for Cabrinha, associated with a kite school as an instructor
Has thanked: 0
Been thanked: 0

Hey all, I recently purchased a 12m Apollo and just wanted to throw in my 2 cents on first impressions, performance, and different settings.
First off I'm 165lbs, riding a 137 Ace twin-tip and 2002 Rush Randle foil

15-18mph day with a twintip (rigged top knot on A steering setting):
On the Beach:
The 12m had very little sheet and go pull (wasnt expecting much in such a light wind day) but when moving through the air, it generated a fair amount of pull. I was also surprised at how quick the kite turned, pivoting around its center. As a comparison, I felt it was slightly faster turning relative relative to last years switchblade. Another thing to note was that the kite generated little power in the turn. It felt as if the kite would stall when steered aggressively then drive forward again when letting the bar out, generating power. This was very apparent when trying to waterstart. I found I had to sweep the kite far behind me then dive it in the direction I wanted to travel and ease the bar out to get up and riding. Once on a plane, I found the kite performed best sheeted out and adjusted the trim line in 3 inches.

In the Water:
Up and riding, I was able to stay up wind very easily when on a plane however when moving slowly, the kite felt like it sat too far on the edge of the window to generate any power and found myself sinking quickly anytime I leaned hard on my heels to slow down. So on a plane, the kite was very stable and felt like it generated plenty of power. Even with the trim line pulled in, I rarely had the bar sheeted completely in and noticed the canopy did not luft very much along the leading edge when easing the bar out and planing.
As far as jumping the kite, I felt that the Apollo performed similarly to the 2013 Cabrinha Crossbow LW as far as how I sent the kite (best height and loft when sending the kite to 12 instead of behind me as I would when jumping a C kite). I would also note that when I jumped and held the bar sheeted in (depower still trimmed 3" in) the kite would not give me the loft that is boasted of in all of the video reviews by Cab. However, when I started jumping, kite sent to 12, sheeted in at first to gain as much height off the initial load and pop, then sheeting out part way and steering the kite back in the direction I traveled, I found the kite continued to generate power and loft for a much "floatier" jump like the old crossbow used to (im assuming this is because the kite was still driving forward through the air while I was jumping). This was only during an hour and a half session. I am still varying a lot of my techniques to try and find a combo that I think works the best for me. I will post more when I get to try the Apollo in more conditions (curious how well the structure holds in higher winds, if it will start to deform in over 20-25mph, how it will jump on the C settings, etc).

10-12mph building to 12-15mph with foil (rigged middle knot on A setting):
Foiling with this kite was different than I expected. With the kite generating little power when looping in light wind, I had to again send the kite behind me to get up and ride however as soon as I was up, the kite wanted to accelerate with me and I found myself depowering the sail 2-3 inches. Unlike most kites, I found pumping the kite up and down did little to generate power but there were very few occasions where I needed more. When I rode at the kite and slowed down, one long dive from high in the window was enough to get me back on a plane.
For a short period, the wind came up to roughly 15 mph and instead of riding fully sheeted out, I decided to pull in almost all the way on the trim line. The kite was still fairly responsive fully depowered, the canopy fluttered a little near the center and in the wing tips next to the outermost struts but overall retained its shape extremely well without deforming massively just behind the leading edge as I expected it to.

10-12mph with foil (changed rigging to C setting):
Changing the kite from the A to C setting significantly changed how the kite flew. Bar pressure was a lot higher (could even see becoming fatigued flying on this setting for a few hours) and the turning characteristics changed. The pivot point shifted significantly towards the wingtip but this did greatly increase the power generated during a loop. Also while standing on the beach and sheeting in, the power generated by the kite seemed more consistent (possibly due to less backstalling?) and not turn off after a second as it did when rigged on the A setting (I landed the kite and switched back and forth to the C setting and A setting multiple times to make sure this was not due to changing conditions). When on the water, finding the "sweet spot" where the kite was most stable sheeted in plaining on the foil was easier and I also felt I was able to generate more speed on a low-moderate wind day as the kite did not backstall as much when sheeted in fully, allowing me to build more momentum. I am very curious how this kite will perform on the C setting with a twintip.

Sorry that was long but I tend to tweak out a lot on my kites and go into as much detail about my experience as possible. I have always had an eclectic taste for kites and enjoy flying "different" kites and finding a new perspective on how to fly them. Would love to hear other people's experiences with the Apollo and how it performed for them!
Top

Hello, it's being a while since the last post...