Hatteras to get another new bridge ... this one sucks.

don’t think anyone is advocating against raised highway. It’s just didn’t really need to go through an excellent spot over water and could have stretched over lan

So instead of ruining a couple people losing their soundside views you would prefer many more people woould have a bridge in their front yard to get to the beach? That would be fun. No free lunch buddy.
Top

Sunset view is kind of valuable and it way more than “couple of houses”. Mid-land houses and houses by the road are not very privileged anyways, so how about this...

The tiny pontoon bridge north sat there for 5 years with construction barely moving and the moment someone lands $145M contract to build over sea with foreign steel - hooray - it pops up there in mere 2 years.

“Cui bono” they used to say 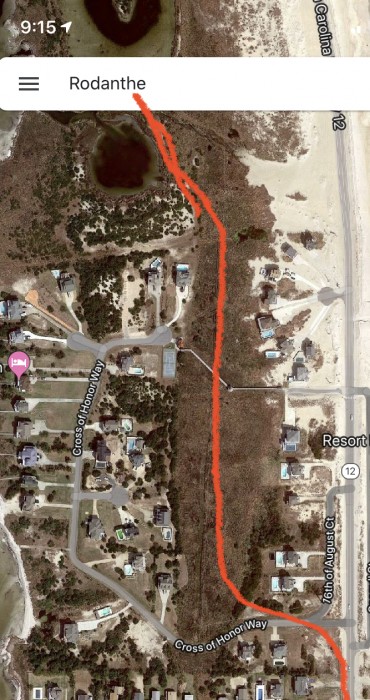 So let me understand this. You came up with a solution that none of NCDOT engineers could think of, none of the environmental lawyers had an issue with, none of the land owners who would have their house destroyed would balk at, none of the lawyers of the eminent domain would have a problem with,.... Wow you did good. This was never an option for many reasons. The new bridge is the best solution. I know you feel better with collusion and overseas companies. Your description is so wrong about the contracting.

" Sunset view is kind of valuable and it way more than “couple of houses”. Mid-land houses and houses by the road are not very privileged anyways, so how about this."
That is the most elitist thing I think I ever heard. If you are on the sound side then you are privileged, but you in the middle we should feel good about sticking a bridge in your front / back yard. The bridge in the current easement had significant ramification.
Top


Brand Affiliation: None
Has thanked: 150 times
Been thanked: 193 times

It’s you who calls people idiots and you sound like one who has a share of the current solution, like those guys with gas station or construction company. Eminent domain or not, I drew a line through land where it makes good sense to me and to many others. Of course you guys needed lawyers and regulations to inflate and justify project cost and whole country is paying majority of the bridge bill off federal funds. And yep - made with loads of foreign stainless steel. (election promises

Two of Pappy lane houses are pretty much ruined, so it could have been less expensive properties to be messed with and paid off. Mirlo beach soundside properties’ value is down, rental coverage will suck - I’m sure all are happy about not touching the damn swamp, are they not?

People buying sunset side paid extra premium for their land, while houses by the road are cheaper with barely any access or view. Cheaper retreat for beachgoers but I’m not one of those.
Elitist or not, but choosing between one-two houses and two dozen of ruined investments doesn’t make it a hard choice.

but as is - less rentals competition for Waves and Salvo which many would appreciate.

It would be cool if the bridge was less controversial project, and I think it could have been cheaper built on land and it could have had less financial impact on Rodanthe.

I’m sure my amateurish idea is not the worst, and I’m sure guys did consider that, so what were the reasons not to do it that way?

Yeah SSK, I don't think anyone is arguing that something wasn't needed for the S turns portion of Hwy 12.

But hey what's done is done. If you and the other residents of Hatteras are happy with the $145m concrete turd the government just dropped in your backyard then good for you! All we're saying is a better economical/recreational/environmental solution was available.

So rejoice! Your precious snowy plover breeding ground is safe.
(for 1 mile)


Brand Affiliation: None
Has thanked: 150 times
Been thanked: 193 times

2.5 miles. Since soundside residents are prohibited from landscaping the mush on their property, there must be some happy creatures in those swamps as well.
Makes rare green soundfront lawns more pricey, doesn’t it.

Something tells me that wildlife is capable of nesting under the bridge if it was a raised highway over land. But then again - it is hard to charge $145M for 2 miles of raised highway. Let’s naively assume there’s zero lobby, kickbacks and self-dealing and all the profits remain in hands of lucky construction folks. Congratulations! That’s hell of a luck!

And Rodanthe folks are just unlucky - hey, it’s all as simple as that, keep moving, nothing to question here.
Top
Post Reply
176 posts