Any thoughts on the half-suicide combo below... 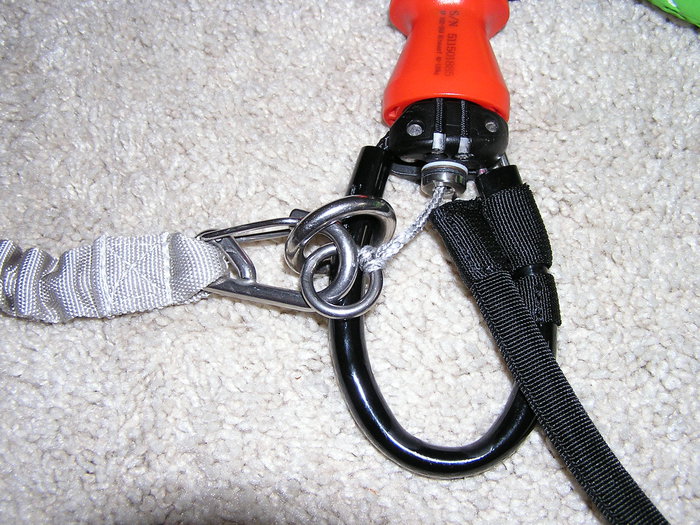 Why are you running suicide if you have a 12" leash?

Full suicide still is spooky to me. Had an incident the other day when someone released my kite while launching before I was ready and it powered up right away, even with the bar fully sheeted out, and had a line wrap around the end of the bar. I had to hit the safety for my and bystanders sake. Definitely would have been a different story with just the kite sheeted out due to the tangle. So running the safety system as the right picture shows is my go to, even when surfing since I run a full length leash.

The main reason you don't want to clip to the big ring like in the photo below (or the poster above me) is that it's really easy for the leash carabiner to twist over and unclip itself from the ring or have the chicken loop open it up and loose both. Having that smaller ring makes it much harder for the accidental auto-unclip. I think I did a series of photos a few years ago showing this vs the small but I could also upload a video. Again...get the north or ozone part. 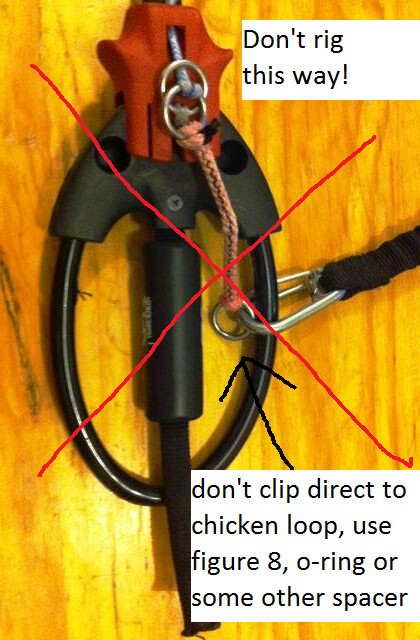 I run suicide as I have had several instances of unintentional unhooking and I do not have to pull in the leash to hook back in or to release the kite on the FLS. By the time it takes to pull in a long leash to rehook, the kite can crash. Thanks for the advice. I will get the North figure 8 ring.
Top

Brand Affiliation: None
Has thanked: 3 times
Been thanked: 41 times

Thats fine to do that. Is it needed if your using a 12" leash no, but it will work the same not rigging suicide. Honestly the only time you would be actually suicide is if your unhooked. I don't think your going to do a lot of unhooking with a 12" leash. Your release will still work the same. I fly SS kites and that is how I hook my leash up suicide.
Top

I was thinking about this the other day, a leash that had a 5th line setup to a mid point quick release would be good for snowkiting unhooked, I've never had to completely release the kite but could have the leash qr right on the harness and the one that activates the 5th line mid leash a foot out or so. Right now I ride unhooked with the leash only going to the 5th line, but never jump that high unhooked. If you let go of the bar and the kite flags out way off the ground snowkiting it's not going to end well. In gusty mountain winds with a giant race foil riding suicide is suicide.
Top

If you size the O-ring properly you should be fine. I've never had a snag with this sort of setup. If you clip directly on the chicken loop you are sure to eventually have the carabiner clip on to the spreader bar. then you shit yourself because there's no way to release other than wriggling out of the harness. I've had this happen several times when I have clipped directly onto the chicken loop. it's not fun! With the O-ring you are relying on gravity to keep the carabiner far enough below the spreader hook so that it never clips on to it and I think it works well enough. It's actually the same reasoning as the figure 8. The reason the figure 8 works is not magic, it's because the carabiner is below the speader hook so when you do your handle pass and hook back in the carabiner is not going to accidentally hook into your spreader bar. I have run this sort of system (just the one big O-ring) for the past 5 years and never had a problem. Sizing the O-ring is important here! It has to be big enough so when you hit the QR it operates properly. The size of your O-ring looks fine in the photo. The figure 8 steel ring is better of course, I should buy a bunch of them and convert it over, but for now I'm still running the big stainless steel O-ring.

It is far safer to run full suicide (clip above the QR) than the clip directly onto the chicken loop like in the second photo. That's the main point. At least with suicide it's not hard to do a full release if you have to.

I don't like how you have two o-rings. The reason is that the first (little O-ring) can tug on the big O-ring and then bring your carabiner into a position where it can snag. it's better to remove the lark's head on the small o-ring and run just that one big o-ring so you have more space between the O-ring and the spreader hook when you finish your handle pass and hook back in. 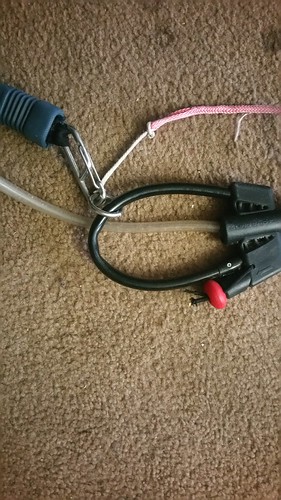 Would this work for a setup assuming I clip safety leash into ring that connects to the chicken loop? 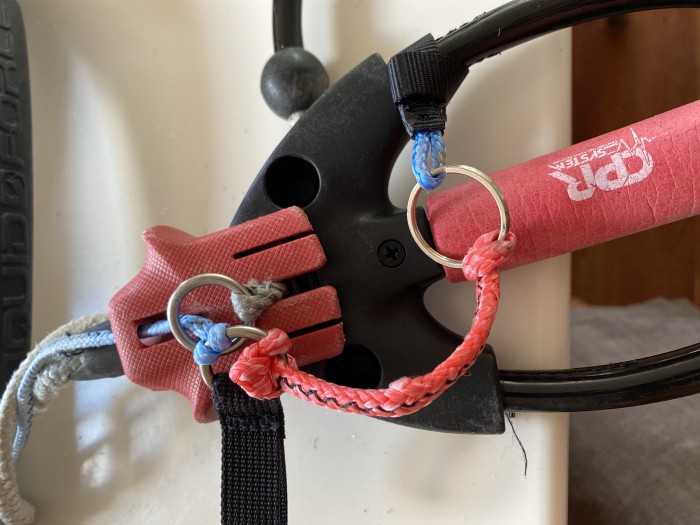 It would function as a regular front line flag out if you activate the quick release.

If you let go of the bar unhooked you'll be attached to the kite through your safety leash , kite remaining powered in the way you rode.

I think you are trying to apply something here to a type of one piece solid chicken loop that is been though out and only works with chicken loops that are "coming apart" when activating the quick release.

If you want to ride unhooked and have a greatly reduced power in the kite on letting go of the bar then try clipping the safety leash onto the black stub end of the repower rope, over the tube between the stub and the ball like. Works a wonder ! Kite standing on the water ready for launching..

Be sure to feed your safety leash through the chicken loop before clipping in , that way you won't loose that piece when you activate the release.
The only benefit of your design on the picture would be not having to do this in order to avoid parting from your chicken loop, you may get lucky with the donkey stick only holding it to your harness hook.

This for the picture above and LF CPR bar.

What are you trying to solve ?
Top

Hi - thanks for all the thoughts. I’m trying to allow my kite to depower while riding unhooked but also have the ability to fully depower if needed. For example, if I keep safety leash attached directly to the black stub and let go of the bar when unhooked it would pull the safety line through and it’d be tough to relaunch vs having the safety line attached to the chicken loop so I could more quickly pull the kite back in and relaunch. Does that make sense?
Top
Post Reply
19 posts