This has been covered many years ago but thought I'd ask again since the Compstick has been updated many times since.
What exactly are the oh shit handles for and how does one properly and safely use them? Also, please explain the third one on the safety line. Thanks. 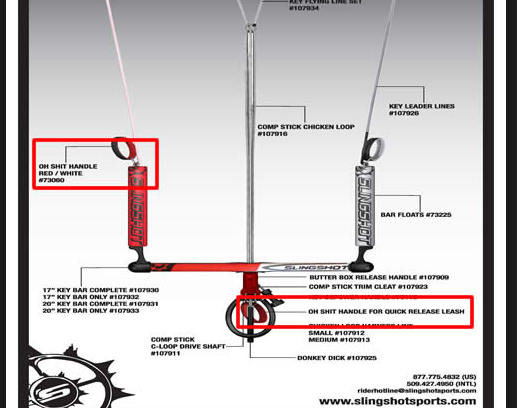 I wish I had some on my bar.

If you check out the video from Anton Chernyshov on How to survive deathloop, he advises stalling kite pulling steering line. that o shit handle would be useful in that scenario.

Furthermore when kite invert inside out, depending on kite shape and bridle the leading edge can get stuck in inside out position and using Quick release or putting all tension on a power line doesn't always flag kite or fix inside out inversion. Pulling a steering line fix those...
I guess they can be useful for back launch but I don't really use that technique. Some people alsoseems to grab line to loop kite on itself (not really a loop more like a stalled rotation) but don't do that so can't comment whether that's useful.

For the third one that's useful if you have a fifth line kite C shape. Those can be hard to relaunch using classic method and often requires to pull fifth line so kit lay on canopy and rotate in launching position. I usually pull leash but if I am rigged suicide I can't do that, not sure whether this bar would allow to pull the handle while rigged in suicide but at least it's a good alternative instead of pulling leash.
In addition in case you want to flag kite to sort out some issue you don't have to use quick release, you can pull handle..
Top

They're there so it it all goes to hell you just grab one and release the chicken loop. The kite will flag to a single back line. Bars that have single front flag systems typically don't have them anymore.
Top

A friend of mine snapped his center line/5th on a Rebel. Scary situation because kite had poor control and no way to flag. If the bar had an Oh Shit handle he could have flagged kite by punching out and holding OS loop or attaching leash to OS loop. I just noticed Epics new bar has an OS loop/handle on one side.
Top

Not really debating if they work. Rather, in what situations would they be used and how to properly use them. I gather it's important to punch out first, then grab or clip onto them. It's that sort of info I'm seeking, not if they actually work.
Surprising that Slingshot and now apparently Epic, are the only two using them. If their presence is such an added safety feature why not more brands?
Top

On my 4-line tube kites, a single front line flag-out system is all I want. I had o-shit handles for a while on my tube kite bars, but they tend to snag other lines during launch/landing/loops, and I think they are redundant as a safety system on a front-line flag-out bar. Plus, a four line tube kite spins your lines into a total mess if you flag-out on a steering line. Bad enough flagging on a front line!
Top

If you punch out first, the bar may be too far up the line and out of reach to grab the OS handle. Grab the handle first and then punch out as quickly as possible. Also, it doesn't have to be the 5th line, any of the single front line releases can be a problem when the safety side breaks. It will disconnect you completely from the kite, which might be exactly what you want but there are times where this puts others in danger so the OS handle might be a good idea. Every situation is, unfortunately, different and requires its own response. Sorry, no one size fits all. Other than, maybe, do whatever you need to do quickly before things go completely sideways.
Not sure why others don't use them. Maybe because with the new single line release they don't think it is necessary because nothing can go wrong, go wrong, go wrong, go wrong.....
or maybe it makes it harder to adjust the lines or maybe it costs more or ? Anyone else know for sure?
Top

oh shit handles are a last resort to save your kite. I personally don't like them much. When you do release the oh shot the kite spins like a top and you get all kinds of spaghetti. It is not like your usual front line flagging. Secondly you must maintain the Velcro on the oh shit and makes sure it is properly working and not old. When the Velcro gets old from either UV or seaweed getting into it, the handle can just come loose for no reason. When this happens, suppose the wind dies and the kite falls down something like that, well when that happen that rear line can get loose and wrap around your bar which gives you a death loop one which pulling the QR won't fix. Also in high winds I think you want to keep your decision tree simple. When it is blowing 30, 40 or more you have roughly one or two seconds at most to make all your decisions. For me this is 1) use the QR and 2) if that doesn't work release the kite. The Oh shit handle adds an additional level of complexity to your decision tree. You have to understand that to properly use the oh shit you must first unhook from your chicken loop and be prepare to completely dump the kite, and hold that chicken loop by one hand now grab the oh shit in the other hand and let go. You can't for instance use the primary QR and then just grab the oh shit handle because then the safety flag out line is still attached to you via the leash so now you have two lines attached to you, both the oh shit and the QR flag out line that would create a kite loop. You would have to use the QR, quickly grab the leash release and the oh shit at the same time and then fire the leash release to make sure the kite is entirely disconnected from you and then grab that oh shit handle. I also don't find the oh shit handle that useful in waves, if a wave is eating your kite you will have to full release if you want to save the kite. On the plus side if your QR fails you have a manual safety you can use. That is nice. So there are pluses and minuses. I like to test my QRs (both kite and leash) frequently so I have a lot of trust in it working. Use the oh shit if you like just be aware it is going to add an additional level to your decision tree. I know some say there is no minus "having additional options" well I don't think that's right. Having additional options can sometimes mean you have a slower decision. Simple quick reliable safeties. The oh shit is simple enough and if you like it go for it, but I for one don't like them that much. Like I said before, if you go with the oh shit handle make sure it is properly maintained I have had a few nasty experiences before with an oh shit handle when the Velcro wore out on me. You can go for a nice little ride. I took off all the oh shit handles on all my control bars and would rather rely on the QR.
Top

Brand Affiliation: None
Has thanked: 39 times
Been thanked: 40 times

I snapped a front line on my RPM and it started to do slow death loops on the water in 30+ knots. I went to punch the safety and realised the broken line was my flag out line.

I had a few hundred metres before I reached land, and the "death loop" video came to mind while I was wondering what I was going to do, so I grabbed one O Shit Handle (rear steering line) and pulled hard. Took all the power out of the kite and I just walked the line to the kite.
Top

I ride all my high wind kites on Slingshot bars...

I have had to use the O-shit a couple of times. It works, all that matters to me!
Top
Post Reply
39 posts