Did I say surfboards ?
Brand Affiliation: None
Location: California, USA
Has thanked: 0
Been thanked: 3 times

BigZ wrote: ↑
Thu Jun 01, 2017 4:05 am
One way to do it is to use one of the surfboard volume calculators - e.g. One on firewiresurfboards.com - and enter young, fit, expert surfer in the form

The volume returned should about right for old, unfit, beginner kitesurfer

I like this, you've described me to a T

This formula works for me

Brand Affiliation: NONE F--- the corporate world
Has thanked: 244 times
Been thanked: 256 times

Yup, I did leave that out. Thanks for the catch.

In my testing, I found that thrusters (3 fin) had almost exactly the same control input/feedback as 5 fin configurations. Or rather, any multiple fin configuration with a significant center fin would feel like the traditional 3 fin setup commonly referred to as a thruster. And in my experimentation, I kept going down in center fin size to loose the thruster feel. It was only successful on my main testing platform when I got down to a fin less than 1.5" of a wake board TT style as no surf fins are available in that size.

I do remember a prone surfer experimenting with a 5 fin setup where a tiny fin, refereed to as a "guitar pick" was used for the center fin. I did not believe that one would need that small of a fin to balance out the feel between a quad and a thruster. After testing, I began to understand why so small a fin was needed in the center.

So to put it simply, a center fin of 1.5" or more would dominate the feel of a 3 or 5 fin system. Thus a "significant center fin" turned out to be any fin over 1.5" on my main testing platform. Prior to testing, I was most excited about a 5 fin configuration. After testing, I had abandoned the idea of any usefullness of a 5 fin system all together. And now I see why there is almost zero popular use of a 5 fin (all in at the same time) system in surfing or kitesurfing. It seems that the 5 fin configuration brings the worst of both worlds to the table, not the best, as I had hoped.

So you have certainly caught me being unclear. And I should have known better. This "5 fin is the same as a 3" is something I never conceived of before the testing, but now I just accept it and fail to explain that which would not be obvious to someone without this experience.


The simple definition of a thruster as referred to by prone surfers is a 3 fin configuration with a larger double foiled center fin and smaller toed in side fins with flat to 60/40 foiled side fins. Many other variations exist, but the larger center denotes the standard design.
Top

Beardytello wrote: ↑
Wed May 31, 2017 4:50 pm
Whats the difference between a kite specific surf board and a normal one?

I'm a way off needing one but eventually I'd like to try strapless surfboard for a laugh.

Matteo V wrote: ↑
Sat Jun 03, 2017 3:33 pm
...The simple definition of a thruster is a 3 fin configuration with a larger double foiled center fin and smaller toed in side fins with flat to 60/40 foiled side fins.

Ah OK I see, you were really referring to high school level. Sorry, my bad, I thought you had analyzed and modeled the thruster setup with some profound physics background.

I have been looking for the fluid dynamics take on boards and fins for a while. Little has been published, of which nothing is really helpful. I found the best results in modern naval architecture dealing with foils and keels.
Top

Brand Affiliation: NONE F--- the corporate world
Has thanked: 244 times
Been thanked: 256 times

What have you found?

I had dismissed this type of research because the "thruster vs Quad vs others" debate is dealing with 3-4-5 fins that produce a completely different response presumably due to location and number, compared to keels. Keels are pretty complicated in their own right, but I did not think any research would cross over as they are so far removed (bare virtually no similarity) from rear mounted planing hull vertical fins. Research on skegs, rudders, and other rear stabilizing surfaces could hold some promise for analysis in relation to surf fins.

As far as the hydrodynamics - you are correct that I never got that far. To get to that point, I believe one would need a definite description of control inputs and the associated feedback reliably linked to those inputs. That is where I am at in the research. And that seems to be what the community is struggling with describing also.

But if this examination of the hydrodynamics yields some promising and clear results, you would have my admiration for your insightful approach to the problem of describing the variables in the quad vs thruster comparison.
Top

Yeah, there is that level of discussion, and then there is the simple and maybe more practical real world stuff that might help the average rider.

Take the trailer out of a thruster and feel just how loose and fast that thing gets. There, that is one end of the spectrum. Do it on a small day and it will be loads of fun and you will see why people are bothering to play with quads. Then throw it back in and your back to the other end of the spectrum. A quad is basically trying to hit the ideal middle ground, keeping as much speed as possible while tempering the extreme looseness without locking it in as much as a thruster. Forget breaking down venturi effect or toe in and foiling specifics, the goals are maintaining some of that twin fin liveliness by reducing drag, increasing lift, yet tempering it by maintaining more drive out of turns and improving grip/hold without getting too locked in. The feel of breaking out the tail is awesome so the goal of a quad is to facilitate that in waves that are not so big, powerful, fast or critical. Think rally car handling to make it a bit more fun in smaller stuff, where a thruster gives formula one style hold for when the stakes get higher.

For anyone riding small inconsequential waves a twin is not only totally manageable, but really fun. Definitely the go to for trying a 360 off the lip. A quad is trying to let you take some of that playfulness into mid size surf without feeling like you are on the verge of skipping out all the time like a twin is prone to.

This is the one I have, and its a gem. Comes stock with Tokoro model specific glass fins. No messing around so you don't f*** it up with lousy fin choice. Look at the difference in offset compared to the thruster. You can see the lateral footprint of the quad is much shorter than the thruster making it looser and easier to break out the tail. In reality you have put it in the context of the lower rocker, wider tail to really take advantage of the alchemy that goes into making a good quad. These two boards are clearly designed for different conditions and are finned accordingly with the small wave board as a quad and the thruster for bigger surf. 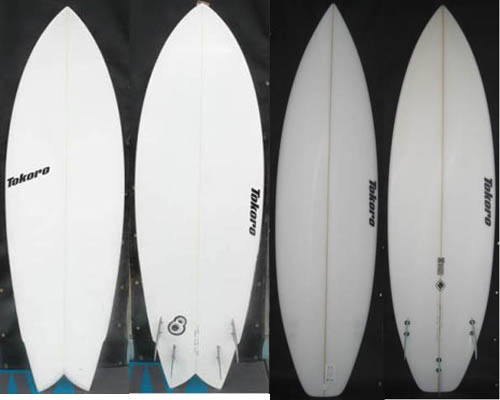 Here's a good little thread on "nubsters" (5 fin setups) on the zone.

that is a really good "Real World" explanation, as you know sometimes removing fins, or going down in fin size, makes a board more fun,
I had a Naish 5'2 Quad with bigger front fins, smaller rear fins, Big fins at the front, = loose, fun, board. Big fins at the rear = tracked upwind well, but too locking in.

Fin-size on my directional is kinda important ; took a month of changing
out fins, to get that just right balance between stability and being able to turn it.