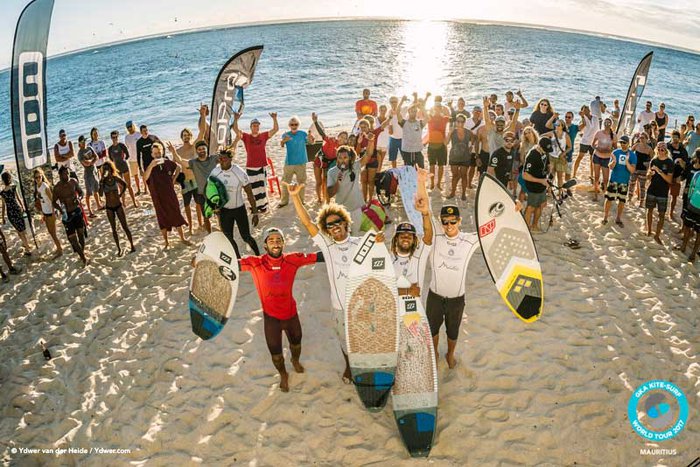 
So, where to begin after a dramatic end to the men’s division at the GKA Mauritius finals and the crowning of a new world champion today in Le Morne?   Today began with the first heat of the quarter-finals and the stakes were high. The race for the championship title was down only to Matchu Lopes and Airton Cozzolino but Paulino Pereira would have to beat Brazilian charger Sebastian Ribeiro and then contend with Keahi de Aboitiz to still be holding his third place ranking by the end of the day.

First up, Keahi took on Mauritian young gun Willow-River Tonkin-Shakes in heat 25. Willow has impressed everyone at this event having earned the Best Rookie award due to his string of strong performances and serial barrel-hunting but Keahi is about as tough an opponent as you can get and Willow couldn’t deal with his sheer mastery of One Eye. 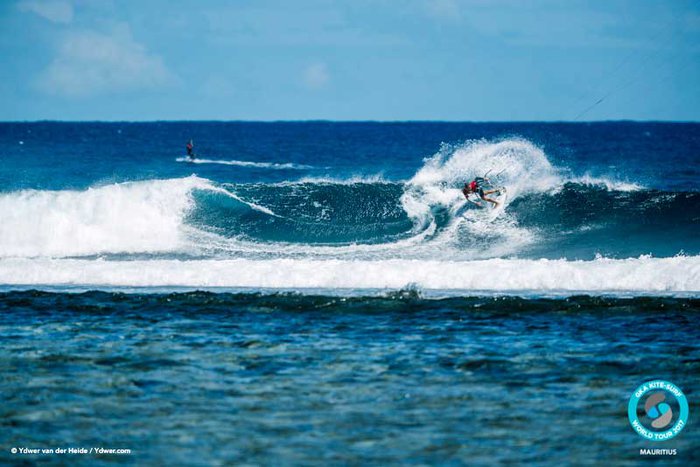 
Ever the stoke-merchant, Willow wasn’t phased in the slightest and why should he be? For an 18 year-old guy to be competing among the best waveriders in the world and representing at his home spot is an epic achievement and it’s clear that Willow is going to be a rider to watch next year on the tour!

Matchu Lopes then beat Sandro Pisu in heat 26 and, while waves were a little thin on the ground in their heat, Matchu cleaned up on what was on offer. Sandro’s had a good event here, riding consistently in his heats and always positioning himself well on the incoming swell, but it was Matchu who would go on to the semis and thoughts of yet another Airton v Matchu final began to enter the minds of those watching from the beach.

Sebastian Ribeiro and Paulino Pereira then had what had looked like one of the tightest heats of the day with both riders charging and displaying their, at times quite similar, powerful backside riding styles. However, the judges' scores put a clear margin between Paulino and Sebastian and so it was Sebastian through to the semi-finals. 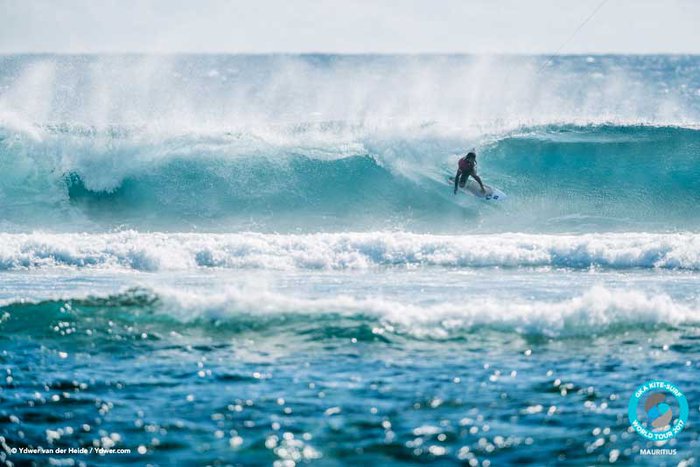 
This put Paulino’s third place ranking in jeopardy as, if Keahi placed higher than him and finished in second or first, he would be knocking Paulino out of the top three. With Keahi already through to the semis you can see where this was going…

Airton and Kevin Langeree then met in the final heat of the quarter-finals and this could have been the moment Airton’s title-race against Matchu ended. Kevin has taken all comers at this event and if he’d beaten Airton and Matchu had won the event then Matchu would have been crowned champion so this heat was pivotal.

When Kevin almost pulled into a barrel towards the end of the heat it looked as though he might be about to knock Airton out of the competition but Airton came back with the highest scoring combo of the event which earned him a cool 18.82 and he was through to the semis where he would face Sebastian Ribeiro. Whatever happened in his next heat though was almost immaterial, the title was now his.

There was a break in the proceedings at this point during which women's heat 12A was run. This was when Jalou Langeree began her comeback by beating Johanna Catherina decisively after a loss to Milla Ferreira in the women’s single eliminations two days ago.

After that it was back into the men's division with Matchu Lopes going up against Keahi de Aboitiz in an absolutely crucial heat! Matchu Lopes' mission today had been to stay in the contest and hope Airton Cozzolino lost before the final if he was to retain his World Championship but Keahi has been known to scupper a rider’s title hopes before and that’s exactly what was about to happen.

This was a turning point. If Matchu had won this heat and Airton had lost his next heat then the title would have been Matchu’s for the second year running if he could go on to win the event himself. It was not to be though as Keahi delivered a devastating display of top-to-bottom waveriding. Keahi had the best waves of the heat and things might have gone the other way if Matchu had had better luck on that front but wave selection is a crucial part of competition and Keahi took the win.

The spectators (and Matchu) were still reeling after his defeat when another drama unfolded as Airton went down to Sebastian in the second semi-final heat.

Some of the those watching the action unfold on the big screen felt that Airton had deserved the win and the Cape Verdean contingent were up in arms but the judges felt otherwise and perhaps rightfully so. Sebastian has had an outstanding event here at this last stop on the tour having stormed through the trials, just as he did in Dakhla, and he fought hard to take the win riding well and commanding some of the bigger sets comfortably.
Sebastian Ribeiro charging / Photo: @Ydwer
Then it was down to the final and mini-final. The title race was already decided and there was no way Matchu could unseat Airton, even if he beat him in the mini-final, but they’re both true competitors and neither one was going be happy if they finished their final act on this year’s tour without a fight.

The final round was even more important for Keahi as nothing less than a win was going to be enough for him to snatch third overall from Paulino and he would have to draw on all of his formidable experience in competition and at One Eye to make it happen. 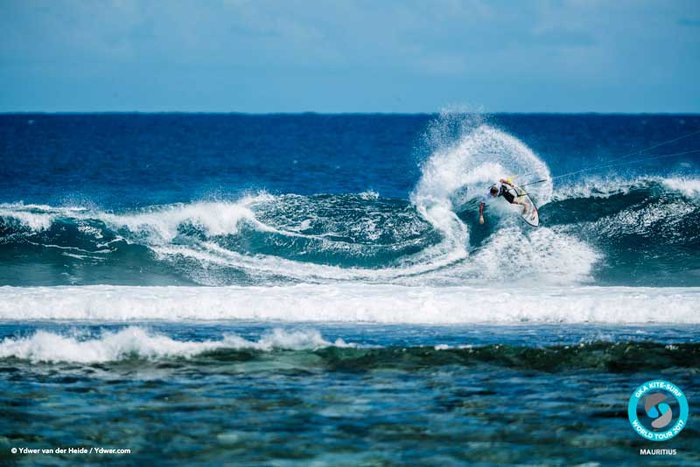 
Sebastian had taken down some big names already today and was gunning for the win but Keahi put together what may well have been the best performance of any rider at the event. He was ultra-consistent and picked the standout waves every time nailing huge arcing turns, driving his fins free at the top of the wave before charging back down the face and launching himself back into yet another assault on the lip.

It was a masterclass in how to shred One Eye and, although the winner of the heat wasn’t to be announced until after the mini-final, it seemed clear that Keahi had clinched it.

In the mini-final, Airton and Matchu met in yet another showdown between the two old friends. It may not have been the heat they’d expected to end up in but that took nothing away from their desire to win and Matchu made the most of the heat, picking out the best waves and leaving nothing to chance against Airton.

It may well have been Matchu’s best heat of the event but Airton, perhaps disheartened at not being able to take a totally clean win here in Mauritius, floundered and crashed his kite three times. On the waves that he did catch he struggled to regain his form from earlier in the day and Matchu capitalised on that and he was the clear winner. 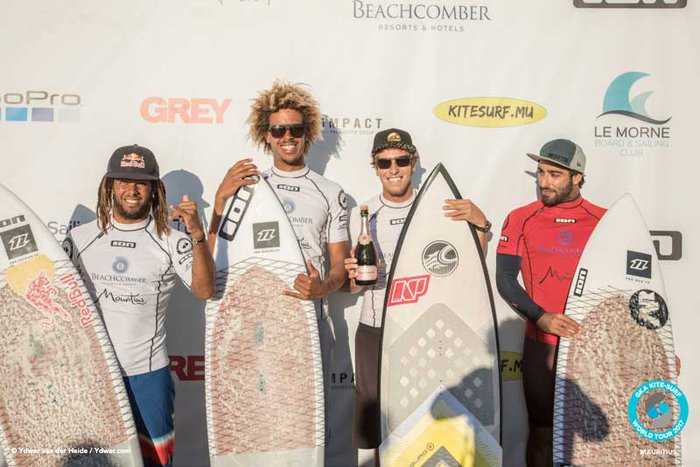 
There was little surprise on the beach when the results came in with the competitors back on the beach but applause were not in short supply! Keahi had taken the event and with it third place overall on this year’s tour and Matchu had secured third behind Sebastian in second.

Airton was fourth and, from his response, it appears that was what he’d expected. Speaking after, he conceded that he’d been a little demotivated not to be in the final but that he was still happy with his result and his new title that he’s been fighting for for six years!

Matchu was equally upbeat, commenting that he felt he’d had a good event and was happy with his performance after a tough competitive season but, above all, happy for his friend to have finally secured his own world title. At least they both have one now! 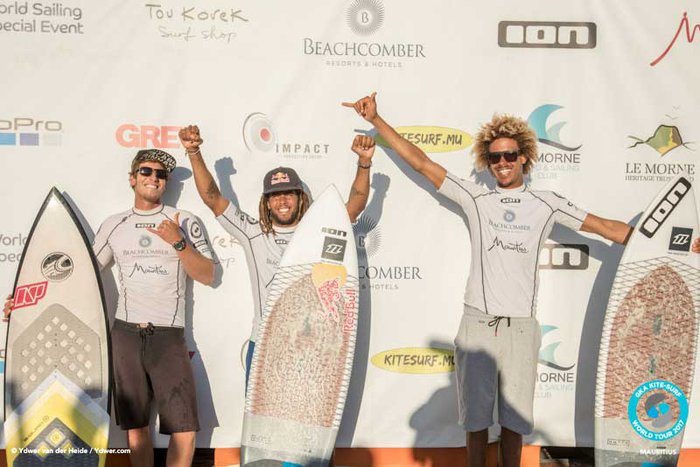 
Keahi was the most stoked of all and for obvious reasons. Speaking after he said,
“I’m really happy with my results. I’ve never actually won an event here and I felt like last year I took the title away from Airton and gave it to Matchu so this year I’ve done the opposite and helped Airton take it so it balances out”.

Talking about his second place finish it was clear to see that Sebastian was happy with his performance. To have come that far from the first round of qualifiers had been a real challenge he said but he’d done it and, although he’s known as a waverider, he admitted that he’s been working on his strapless freestyle level in secret and has plans to become a regular presence on next year’s tour.

The men’s division is over now, and Airton’s championship secure, but the event isn’t over yet. The women continued with their double-eliminations today and the conditions are looking solid tomorrow for the final rounds in their division.

There’ll be some stiff competition tomorrow among the top six riders in particular!
Top

Congrats to Airton. I got to kite with him for a month on Maui during the winter 5-6 years ago. The guy was amazing in every sized surf. He was so far ahead of all the other pro's there. Glad he finally got a big title, he totally deserves it.
Top

How good is Keahi, winning the only real wave comp in the tour?
Top

Its King Keahi from now on ; )
Top

Awesome, both kahi and airton are real sick riders.

Did u see this keahi wave from backdoor last year? so sick - it would be a 10 pointer on the WSL world tour!

This is probably a very stupid question but can anyone tell me why all the riders were riding the wave backside rather than frontside?
Top

Airton is a close second too

chalks wrote: ↑
Wed Sep 13, 2017 2:29 pm
This is probably a very stupid question but can anyone tell me why all the riders were riding the wave backside rather than frontside?

That mostly just comes down to rider preference. Some riders like airton rip frontside both ways ( actually airton is totally ambidextrous and can even rip backside in his non preferred stance!!)

Other riders like keahi follow the surfing purist style of only putting your best foot forward and always stick to their preferred stance, this means they will often end up riding backside