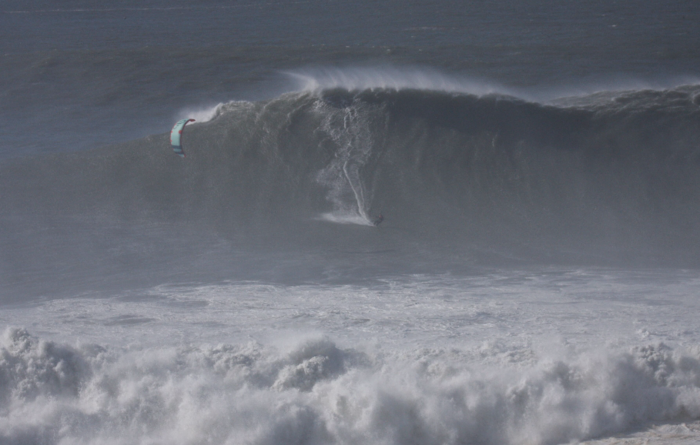 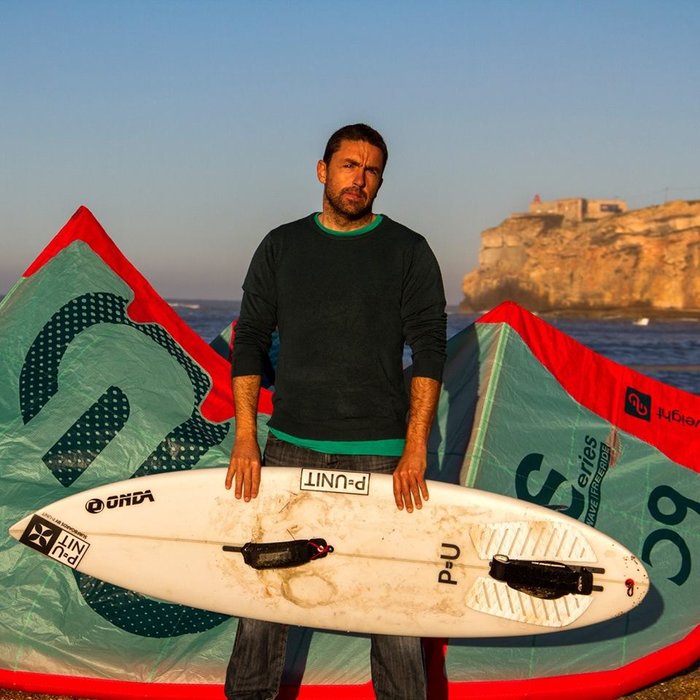 Nuno „Stru“ Figueiredo, in kitesurfing you already have a name as an excellent rider…when did you start kiting?

First, thank you very much

I ride since 2001. The time I started with a foil kite, those times when safety was hell on earth.
So, I started really in the beginning of the sport. I was the first kiter in my town.
And, it was pretty fun.


What is your age?

I am 40 years old…getting old

And when did you start kiting in waves?

I started to kite because I saw Flash Austin riding some waves with the kite, and I already did 10 years of surfing at that time, so I thought it was a good idea to use the wind in my favor.
I started to learn on the foil kite, did water starts, then jumps and I was addicted to freestyle.
I did more freestyle then riding waves.
In 2006 I made a 4’9 in my garage and I started to wave ride with foot straps.
I competed at the KPWT in Guincho and became 5th ( I think).
Then 2 years after I started to ride strapless and became national champion at 2010 and was invited to the KSP world tour for 2011 and 2012.


Do you prefer riding with or without straps?

No straps of course! Like this it becomes most similar to surfing.
But in Nazare, the big waves, like the tow in surfers, I ride with straps, due to the bumpy ride and jumping over the waves.


What was your biggest wave you rode before?

In 2004 or 2005 I rode bigger waves on Papôa in Peniche … Joao Malafaya, a friend of mine who is a tow in surfer called me and asked if I think I can ride in that wave. So I checked the forecast…and said it is my backside, and it is not very comfortable..but I went anyway. It was about 5-6 meters.

My hometown Porto also has sometimes 5m solid waves which I rode.


Did you ever had a big wipeout before? How high was the wave?

My biggest wipeout I had in Papoa (Peniche), which I actually have on tape.
The wave was about 6m high.
The foam caught me and I crashed the kite, but I managed to get out.
Actually, when I wipeout I stay pretty calm, because that’s the thing…you stay calm and everything goes well. If you stress, you are f*****.
My friends on the rescue jets shouted to me to let go of the kite…and I said relax…and I put the kite up in the air again.


Did you ever get scared or feared your life during a wipeout?

No! You don’t think about that. You can’t think about that. Just stay calm…and be mentally strong.
I get scared the day before, I am really scared, and after my session. But when I go inside the water, all the fear goes away. No stress, no fear, just total concentration.


Do you take any precautions for wipeouts? Any special breath training or equipment?

I have fluctuation foam on my custom made harness.

Inside and outside the wetsuit I wear a vest.

I make special training for breathing a lot, like apnea.


When did you come up with the idea riding such a giant wave?

It was in 2011 at the WAA when I went to see the crazy show when McNamara did the picture of the lighthouse am him riding the biggest wave. And I thought it could also be possible to rid this wave with a kite.
Only after 3 years I could see a wind direction which is really good for this wave and I rode smaller waves to test out the conditions.
It has a huge cliff, and usually with a bit side onshore wind the wind dies, so it has to be side shore.
It can be a really windy place.
So I startet to train more and more and also did courses with the jet ski pilots for rescues.

It is the biggest wave on the world. Period. And it has wind.


How much wind did you have and its direction? And how is the wind between the waves?

I am not gonna tell the direction

I started the session with about 22 knots. It increased in the middle to around 25 knots and later about 27 knots.
I wanted to ride with my 9, so I wanted minimum 20 knots.
With more wind and for a longer time the waves get mushy and choppier, so it is better to go in the beginning when the wind comes up.

The most scary part was when wave breaks it creates air from the lip and pushes the kite down and there is no more wind. Don’t get there! I had it happening 3 times on that day…the kite almost touched the water…luckily I brought it up again.


And what are the most dangerous things riding Nazare?

You have the cliffs, rocks downwind, the really strong current, waves breaking everywhere. There are 3 peaks, but they change. You can ride one wave an look behind there comes already another one. No safe channel to go to.
I think it is the most dangerous spot in the world.


How much time did you spend to learn more about the wave…where and how it breaks etc?

3 years! On my way to ride some super tubes in Peniche I always stopped there to see how the waves are.
I went also other times spending all afternoon just watching the wave trying to understand it.
It is not easy. As you could see at the WSL XL wave competitions, the locals went to the finals.
The other guys who should up few days before the contest, major players, were all out, because you have to understand Nazare. You have to learn the wave a lot.


Are there better places to ride giant waves?

Maybe Jaws. But it doesn’t get so big. It is a reef break and always breaks on the same spot.
Sideshore winds, make it easier to have wind on the lip.
But, Nazare is the biggest!


What were your thoughts thinking of riding a giant wave? Was it more fear or excitement?

More excitement. Fear when going in, excitement when I was in.


What were your backup plans if something goes wrong?

I had jetski support. Everything was planned by Jorge Leal. He also does plan everything for the big surfer guys.
When I arrived at the beach and asked if everything is ready, I was informed that there is a big problem…Andrew Cotton went to the hospital so actually I had no more backup.
I called Rafael Tapia and he said it is really gnarly and huge, and I just had the biggest wipeout of my life, I almost died…are you sure you want to go in?
I said if the wind will pick up, I will go in…so he said ok, I will be on the jetski and look out for you.
I asked the other guys around to with me too and that I will go in now.
I went 2 km upwind to get into the water, waves there are around 4-5 m. Then I went downwind to Nazare. And when I arrived there was no Rafael…he helped a Brazilian rider and went to the beach after that…
At the end I was with no instant backup…of course, the other guys would help out, but no instant backup watching me closely.
There where 3-4 jet skis around, but I didn’t talk to anyone before.


Tell us how you got into the wave

I was riding around and trying to understand what was going on with the waves.
I tried to go more and more inside. When going back I saw this big wall right in front of me and I said, ok, let’s jump it, why not

It was the one thing I wanted to do when I came to Nazare for the first time when it was about 10-12 m. But the wind wasn’t so good that day.
The jump gave me motivation to continue, and after a while I felt the big wave was perfect for me…and I rode it. And it was a good choice.
I tried again, but my kite got into the wind from the lip and almost touched the water so I finished my session.
My session was about 2.5 hours. 12- 2:30 pm.


You wrote that IFKO validated your record. So it is an official record? How did they measure the height?

Yes! It is. I made an application for a world record to IFKO. They had a team present and asked me all my photos. IFKO made a request to Kinetics university to help to give an accurate measure... with a specific software. It took 3 weeks to work on it . All my personal details and gear also were measured. That they sent the document to IFKO that approved and give the final measurement of 19 mt 63ft.


What did you think when you got over the lip and entered the wave riding „downhill“ ?

When I started to go down that mountain I knew it was a nice one. No wave behind me. It was clean, not too bumpy. And I thought, it is this one now or never. And I just went for it.
It was smooth and really fast. When I finished I looked back….and nothing behind me…so I tacked out.


What would you have done if you crashed ?

If I crashed I would have looped the kite to body drag out of the area.


Which gear did you ride?

I had the Eleveight WS 9m kite and 5’11 P Unit, a specific tow in board for big conditions.


Will you hunt now giant waves to ride them bigger and bigger?

Not really. I think what I had to do I already did

I have another idea, but not bigger and bigger. But…it is possible.
It is not easy with all the different conditions. I don’t think a day like that will be hard to find. For now I feel I accomplished a dream, something I have always thought about.


Do you think there will be other riders now doing what you did to get the record?

I know There are guys like the Hawaiians Patri and Jesse want to make this claim. Jesse was there as well that day…but he was riding more at the end of the day.
So far I didn’t see any video of him. But he said Jaws is nothing compared to Nazare.
But I hope one day someone comes and rides bigger waves. I can give some good tips. I am happy to help that nobody dies in Nazare.


Brand Affiliation: None
Has thanked: 2 times
Been thanked: 0

Thank you for the interview. This is still incredibly impressive to watch, the video gets even better with the context.
Top

Amazing footage and great interview and one huge wave!!
Top

Stru, thank you for your words and congratulations on such a fantastic accomplishment and fulfilling a dream. Absolutely amazing.

Got one word for ya...footstraps. Everyone puts them on for waves like that. I proudly use em:)
Top

Why does Nazare get so big?

this was one of them....how things have changed