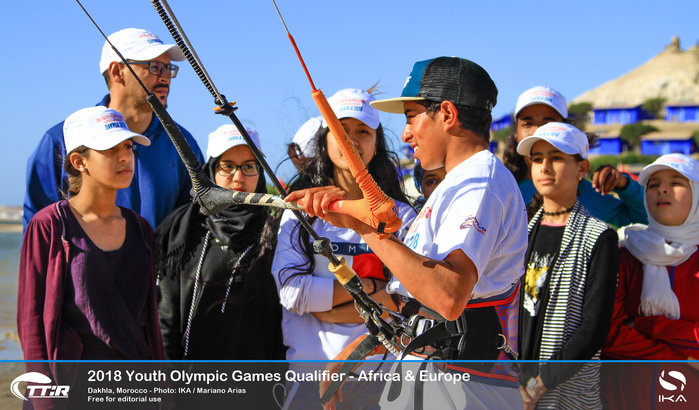 Young kiteboard riders from Europe and Africa hoping to open their account to claim a spot at the forthcoming Youth Olympic Games (YOG) suffered a day of frustration when the breeze failed to build sufficiently to allow racing.

On the first of five days of competition on Morocco’s Dakhla lagoon—a favoured kiteboarding spot because of its consistently steady winds—the light, shifty breezes toyed with race officials who continually altered the slalom course in the hope it would steady and fill in.

But in the end the direction was neither consistent enough, nor strong enough to allow racing. The Twin-Tip:Racing (TT:R) format specially developed for the Youth Olympics in Argentina in October restricts racers to inflatable tube kites and traditional twin-tips to encourage participation. 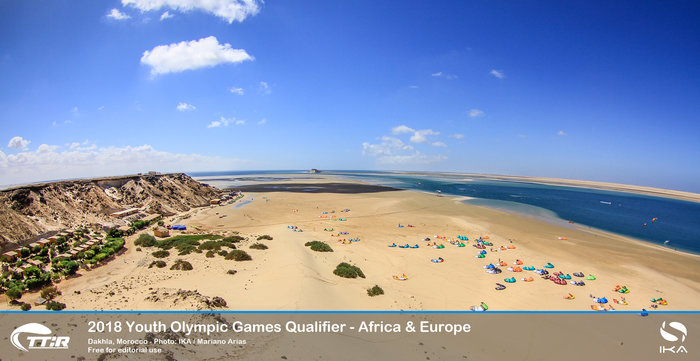 Four places for the Games in Buenos Aires are up for grabs at the International Kiteboarding Association (IKA) qualification event in Dakhla. The winners of the boys and girls divisions from Europe and Africa will each automatically earn an Olympics spot.

Yet even the format of short, pulsating downwind slalom races of five legs designed to make competition possible on a twin-tip and tube kite has its limitations. A minimum steady 10kts is deemed necessary for fair racing and exciting to watch racing. But with an excellent forecast for the end of the week, officials felt no pressure to get competition underway in only marginal - and potentially not fair - condition.

Still, the ease with which many youngsters can get their first taste of racing has won over a new breed of converts worldwide as most have access to a twin-tip board and tube kite used by the vast majority kiters.

Sofia Tomasoni, 15, the recently-crowned IKA TT:R Youth World Champion in Brazil, is one. She is part of the Italian team in Dakhla hoping to secure her slot in Buenos Aires.

“At the start I really hated TT:R because I came from freestyle,” she said. “But as I started to do better at TT:R, then I realised it was so satisfying when you get it right. If you pay attention to every detail it becomes hard. When it’s tough, it becomes fun.”

Multiple world champion, Steph Bridge, who is coaching the British team in Dakhla, has also witnessed an upsurge of interest in racing among youngsters because of the chance the TT:R format affords.

“There’s a lot of interest,” she said. “Everyone got into the sport on a twin-tip. It’s the natural board, as is the inflatable kite, for young people to go and ride on. The great thing for us in the UK is that North Kiteboarding, Ozone and Cabrinha locally, along Axis kiteboards, have seen this as a chance to get hold of some young athletes and help because of the unique opportunity the Olympics provides.”

One boutique brand that has pushed the TT:R slalom envelope is Upeksha. Its carbon fibre Gawa board has been specially-designed for the downwind format, to the delight of some and the dismay of others.

Four of the 11-strong Italian team, fully backed by the Italian Sailing Federation (FIV), have opted to deploy the Upeksha board in the hope it will give them an edge. Italian team coach, Simone Vannucci, has no qualms about his team members seeking any advantage they can. 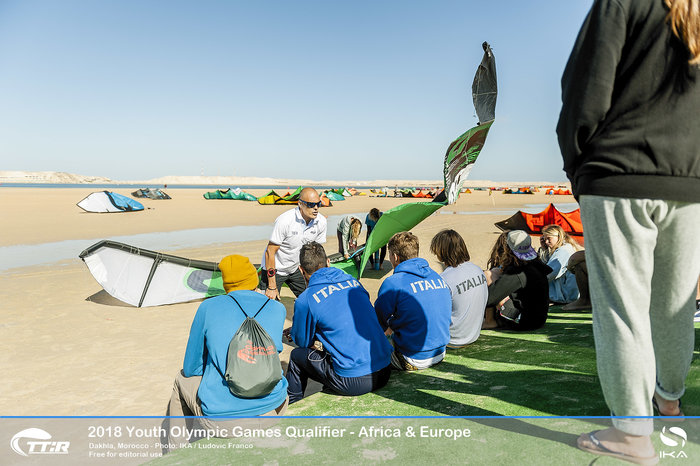 “Upeksha was the only brand to put in some extra effort,” said Vannucci. “No one else was asking the question about pushing TT:R. All the youngsters racing here are serious, and once you go up a level you naturally look for any advantage.”

Polish team coach, Tomek Janiak, sees the appearance of the Upeksha board differently; at odds with the spirit of the TT:R format, if still within the rules.

“When I saw the Upeksha Gawa my reaction was, it’s the ‘arms race’ again. The idea of the TT:R was to be as close as possible to ordinary kiteboarders to encourage youngsters to participate.”

Full rankings and live elimination ladders with scoringcan be found at: www.twintipracing.com
Top

Already developing into a trustfunder style sport with expensive specialist twintip boards. What a shame, it doesn't have to be that way. Copy the optimist model.
Top