Do all kites invert equally?

Absolutely some kites invert more. It's pretty hard to measure tho because when you own a kite prone to inversion you stay away from things which cause it to invert, and if you own a kite which almost never inverts, you push it into positions that it might invert safe in knowing it won't do it, which means at the end of the day when you watch from shore you don't notice any pattern. It's there though, the people working really hard not to invert their kites are the ones on kites prone to inversion.
Top

This thread has been eye-opening. I thought inversion was inversion, but some comments on here have helped clarify. What I apparently experienced in my early days was line inversion. This I am pretty sure i could correct on the water now, but I can't remember it happening in years. As others have noted this may be due to better kites or better skills or both. This past month, HOWEVER, I have had two major inversions with my newly purchased Gong Strutless 11meter. These are not line inversions nor would i say a full kite inversion like one photo earlier in this thread shows. What i have experienced ( twice in only 5 sessions made with this NEW kite ), I would assume would have to be labelled, a kite semi-inversion. I recreated on land in photo ( discussed in another thread on Gong Strutless V4 ). There is no easy fix for this, although I have theories I will try when it likely happens again. Inflation recommendation is 8-10 psi and I had it at 8.25 psi. Will try higher inflations, but both times this half inversion occurred after trying to recover from a backstall in light winds by pulling hard on front lines. This technique has served me well on all my other kites, but these strutless Gongs apparently have no appetite for that maneuver.

Oh, and if you're wondering. No, if this happens in light winds ( like it did to me ) and in that configuration, you are not flying it anywhere... you are swimming.
. 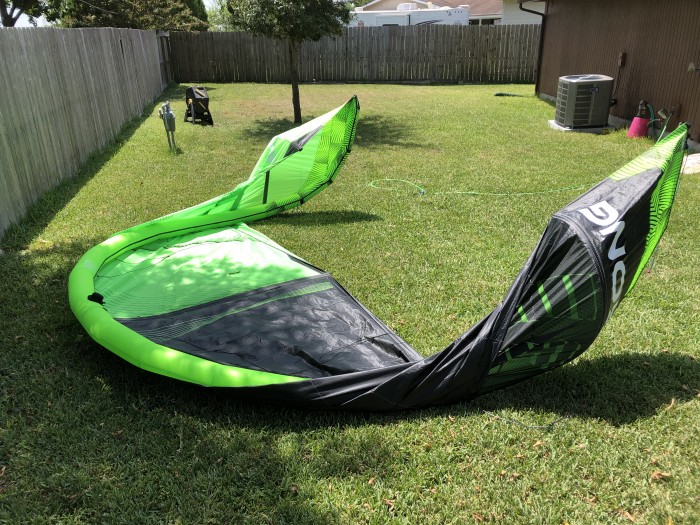 Did the inversion occur on the Gong strutless because it rocked back after the yank in a way that caused the leading edge to luff into the inversion?

Last inversion I had was testing a kite for buckling by flying different patterns to see the effect. Mostly it just buckled on one side and recovered ok. Being a bit dull I eventually tried edging hard against a big open powered loop to see the effect of max line tension. Both sides of the kite buckled in a way that made the LE dip into a luff that caused the kite to invert. Looks like it can de done at both ends of the power spectrum! It was also a 5 strut kite.
Top
Post Reply
33 posts