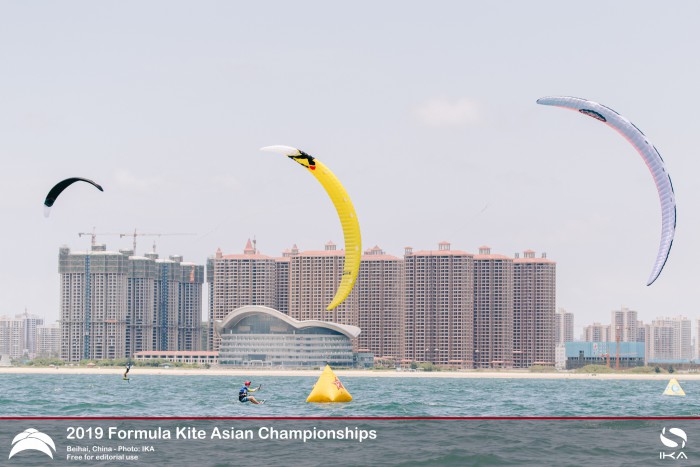 The four women who topped the standings at the 2019 Formula Kite Asian Championships found themselves dramatically pushed down the order when they were forced to retire from one race after discovering they failed to sail the proper course.

For the young Polish pair—Julia Damasiewicz and Magdalen Woyciechowska, both 14—the mistake was a rude awakening to the complexity of top-level racing. Until their withdrawal for missing a mark and failing to complete a lap in the opening day’s second race, they stood first and second with respectively.

Natalie Flintrop-Clarke (AUS) and China’s Jingle Chen conceded that they had suffered crashes on the track off south-western China’s Beihai city beach and had followed the leaders, failing to realise they too had made their own mistakes and shortened the course.

The errors handed Benyapa “Fon” Jantawan (THA) the lead, with a bemused Bilge Ozturk (TUR) close behind in second after two races in the opening skirmishes of the International Kiteboarding Association (IKA) Formula Kite Asians.

But with a further five days of the Beihai City-sponsored competition and many races in the offing, any of the leading athletes should have more than enough opportunity to claw back any deficit and reassert their dominance.

The Polish duo in particular had a near perfect record of two bullets and two seconds until their demotion and looked quick around the rhomboid track in the tropical breezes of around 12kts, that dropped to around just 7kts before racing was halted in early afternoon.

Damasiewicz and Woyciechowska, like many of the men racing in a separate fleet, are hoping their placings at the regatta’s end will earn them enough points to secure a place in kiteboarding’s appearance at the inaugural World Beach Games in San Diego in October.

The men’s fleet fared slightly better, squeezing in three races. But some suffered their own misfortunes. Russia’s Denis Taradin notched up two wins, but his opening foray came to grief when he struck a large jelly fish with his hydrofoil, crashed and finished down the order, leaving him poised in fourth overall.

Turkey’s Ejder Ginyol put in a good shift, taking three second spots that were enough to give him pole position just ahead of Italy’s Mario Calbucci, who opened his campaign with a bullet.

“It’s pretty good,” said Calbucci, riding his 21m foil kite. “In the first race the wind wasn’t so gusty. The other two were very technical. The wind was shifty, left and right by as much as 25 degrees and I missed the layline two times. But I’m quite happy.”

New Zealand’s Sam Bullock sits third overall with two third-placed finishes, but accepted that Taradin’s ill-luck had given him a leg up in the day’s opening race.

“I got lucky in the first when Denis Taradin hit something,” said Bullock. “In the third race I was struggling a bit for power on my 19m. But I still managed to hang in there. To be honest I’m still suffering from jet lag a bit. But I’m looking forward to better breezes that are forecast.”
Ozturk was similarly pleased to find herself second overall, thanks to some good fortune of her own. “I had bad starts for both races. But in the second race I hit something and fell off badly. The girls ahead me just got further away really quickly. I didn’t understand why. It turned out they hadn’t sailed the proper course. You have to sail your own race sometimes and experience comes in handy.”

So what.. there are 2 female competitors from all of Asia in the Asian championships.

Based on the olympic plan - that would mean 2 teams (a male and female) from a population of 5 billion people.

lol.. wtf...Sham. The cracks are going to open... no doubt about that.
Top

Brand Affiliation: NONE F--- the corporate world
Has thanked: 115 times
Been thanked: 141 times

"Olympic Agenda 2020, the strategic roadmap for the Olympic Movement, reaffirmed the commitment and priority of gender balance"

Olympic proposal: history of the sport, whether it has been included in the programme before, the number of affiliated national federations and the level of participation in world or continental championships.

Someone has been telling IOC a bit fat pile of porkies. Soooo suspicious.
Top

The ifko fan boy is back... you dont want to comment on the worlds then? Full men’s and women’s fleet , competitors from five continents. Where were the IFKO?

james wrote: ↑
Sat May 25, 2019 9:21 am
The ifko fan boy is back... you dont want to comment on the worlds then? Full men’s and women’s fleet , competitors from five continents. Where were the IFKO?


28 women competed from worldwide, as we know many of those countries the representative does not have a single other female to race against, look up the nationals - most of them have as single female competing.

I hate to think what bulkl$hit participation numbers of foil racing females in the world IOC/WS were palmed off with. Probably projected, probably included all the stats where the competitors were DNC too.

All sooo very suspicious, wouldnt be surprised if things change.

Wingsurf racing for the olympics!
Top