I have just bought a 4.2 m2 closed cell training kite, which I have difficulties in flying . The manufacturer's documentation claims it can fly in 4 knt winds. Mine won't fly even in 12 knts. The orientation to the wind is correct, but the kite either remains lifeless on the ground or it lifts off 10-15 ft , but it drops almost immediately veering to one side, even though I keep the tension on the lines. Somebody nearby was flying a similar, even smaller kite in 8 knts. He tried to fly mine, he got it up beautifully right away, but then he was unable to control it and the kite fell to the ground, even though he has been flying kites for years. He does not understand why.

I am waiting for feedback from the manufacturer. I discount my inexperience, but I wonder if there may not be a problem elsewhere. Today I had a closer look at the bridles and I think there might be a problem there. The lines were already badly tangled up when I received the kite. I had to painstakingly unravel them and I thought the kite would fly OK after this. On a closer look, I discovered that some strands on each side of the kite are intertwined , as per attached diagram. Can this be the problem?

Thanks for the feedback 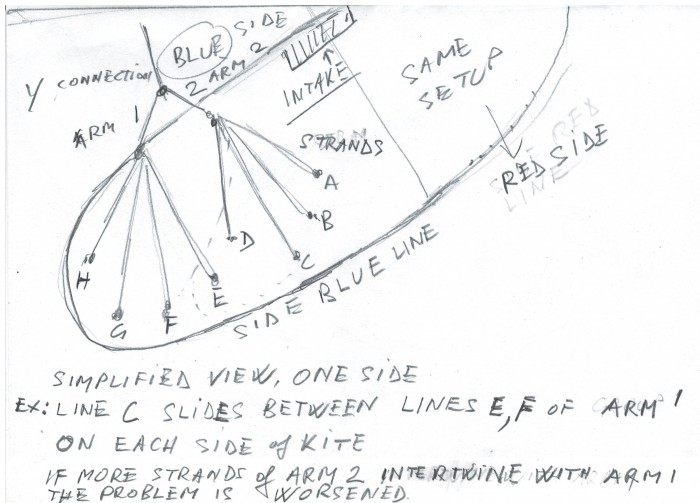 Almost certainly if your kite's bridle lines are crossed & twisted up it will alter the shape of the kite and how it flies.

Work on one side at a time, so you always have a connected example of what goes where. Take one side of the bridle apart enough to removed all twists and tangles. When you have the first side re-assembled tangle-free, work on the 2nd side.

Sounds like you had some tension in the last trailing edge or brake row, which slows the kite down or can even make it fly in reverse.
Top

Bridles have to be correct to within a mm or two. For example if you get a bridle line hooked over the flying line connection larks head the kite won't fly properly. In your drawings I see that the intake is small and so I assume that it is a water kite. Check that it inflating properly, you may be missing an internal inflation hole! Just hold it on the ends of the bridle and fly it or use a set of 3m extensions so you can have a good look. If you have a short bridle line you will see a pyramid at the attachment on the canopy.
Top

Should also have said pyramid of cloth for short main bridle line, and a curl in the trailing edge for a short break line.

You can tune a bridles buy shortening lines or putting in little extensions but you should not have to do that with a new kite, particularly one sold as a trainer.
Top

Thanks for your feedback

To be precise, it was strand A, with the tow point closest to the middle of the kite
at the far right ( arm 2) , that was intertwined between strands E, F of Arm 1.

I believe this is also the longest strand. If it is deviated to the left by passing between (and under ) strands E,F, before connecting back to its tow point to the right, it is also likely to interfere with strands E,F of arm 2 by pulling on them when the lines are under tension, causing an unbalance.
I have reconnected the strands properly yesterday. I’ll try the kite as soon as winds are at least 10-12 knts, which is rare.

I thought, too, that the inflation of the kite may be the problem.

I have tried to pre-inflate it with a portable Ryobi inflater and it took off a lot better, but still it would drop moments later, deflated and veering to one side and capsizing.

What I noticed is that the inflation is of short duration. Is it supposed to deflate that fast when not flying?
I am enclosing photos of the kite: one after inflation with the Ryobi inflater, the other showing it partially deflated moments after. I don’t know if this is normal .

I have brought this up with the HQ rep. complaining that I had found the lines tangled up since the very beginning and mentioning that, in addition, on one side of the canopy the strands were not grouped in two equal groups ( arms) of 4 each, like on the other side, but one arm had 3 strands connected to it and the other 5 strands,.

I have sent photos and a clear diagram , also mentioning a possible inflation problem., but except for an initial salvo of e-mails offering to help and varioys suggestions, they never addressed the bridles issue. They proposed to have it shipped back for an inspection but there is the shipping costs issue, because both the seller and the sales director in the USA are about a 1000 miles or more away.

I haven’t yet mentioned to HQ the intertwining problem described in this post, because I have just found it, but I wonder if I should pursue this issue with them .HQ has a very good reputation and usually they answer right away. If they don’t it may be a sign that they are unwilling to go any further and they are short of options in terms of the company's policy.
I hope they are still looking into it., though. In the mean time I thought this Forum might help. 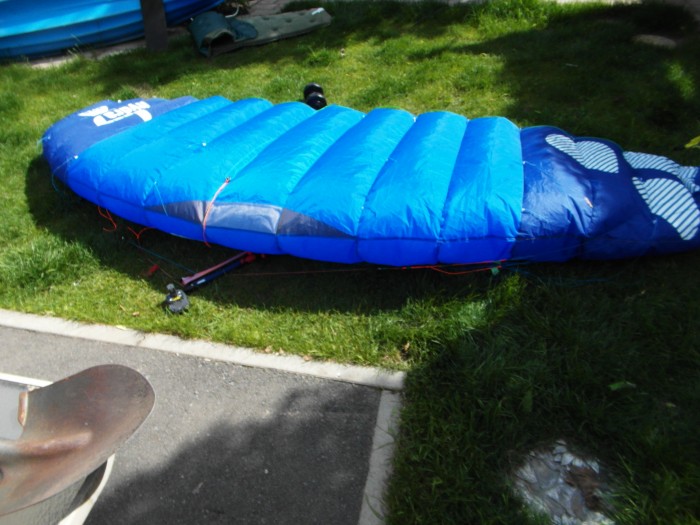 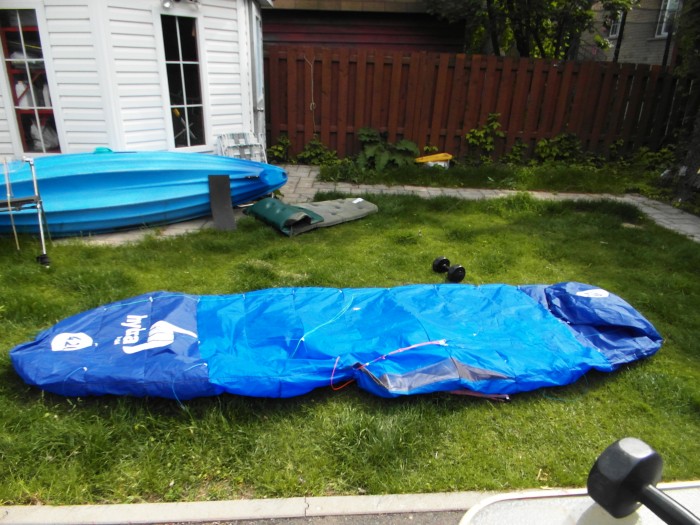 Looking on the bight side this little s/bag is giving you lots of training. Bridle management is not usually taught until phase 4 of the course! Generally and very Simplistically speaking kites that deflate quickly back stall more easily to the ground with less power which is helpful to a beginner. A kite that is hard to inflate but deflates quickly would be unlikely or weird imho.
However you can't judge the kite until you have tried it with the sorted bridle. I would be amazed if a trainer needed a blower before launch. HQ have been making good fixed bridle kites such as the beamer for years and so you have been unlucky.

Sorry I don't have experience with that model!

thanks for your feedback. I went out today. Winds about 10 knts gusting. The kite lifted off better after fixing the bridles,but it still keeps veering to one side and falling. At one point it went straight up all the way, Strong pull, but the same story.I try to stop the kite from veering to one side by playing with the bar ( for inst, if it veers to the right I pull on the left line of the bar and viceversa to reverse the course. ) but the kite does not respond and keeps veering until it falls. Very frustrating. I must say that winds here are very shifty. Is it possible that it beers to one side because the wind has changed direction or has abated or there is a crosswind? Can crosswinds blow the kite to one side? Winds are like a yoyo here : they gust to 15 knts one moment and they stop completely right after

Thanks for your input as usual

You should be able to fly the kite to the edge of the window and leave it there. In gusts (speed variation) it should just surge forwards and backwards if it is a well designed trainer. Any kite will fall if the wind shifts too quickly as a header.

Before you do anything else check the flying line lengths. They must equal (VERY IMPORTANT) to within +/- 3mm.

In general terms, kites only really work in reasonably large open spaces where topography is not causing much turbulence. Often the Newbie will go to the edge of such an area to keep out of the way and of course that is the worst place to fly a kite!

If you are still having trouble after the flying line check get a competent pilot to check it out in a steady wind.
Top

Having said the above your trainer kite should be easy to fly, not too fast etc and so if another kite is flying ok where you are your kite should fly ok too!
If your line lengths are unequal you should be able to compensate by adjustment at the bar leader lines.
Good luck!
Top

I measured the length of the 8 bridles strands on each side of the canopy ( from the tow point to the junction with the blue and red lines that link to the control bar.) Surprisingly, there are differences in length between the same strands on the right side and the left side.These differences are mostly between 20-50 mm except one case where one of the strands is longer (or shorter) than its companion on the other side by as much as 250 mm (or 25 cm) measured twice. This is a lot !!! . Can this be the reason why I cannot get the kite flying properly, if at all! I begin to think so