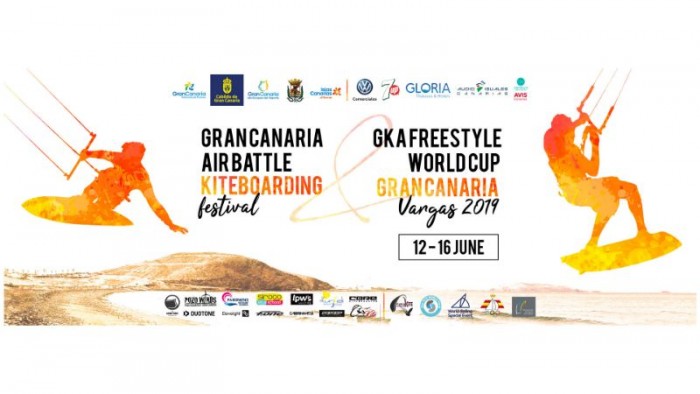 The main event got underway this morning at Playa de Vargas with the men on the water first in round one. With winds ranging from 15-18 knots, the opening round was to be 100% freestyle, with riders able to do seven tricks per heat and their four highest scoring ones counting towards their heat score.

Gianmaria Coccoluto won heat one with a powered, high and stomped back mobe 7 and then Valentin Rodriguez, a prodigious young talent from Colombia, won the next heat by the biggest points margin of the day - a massive 15.03! 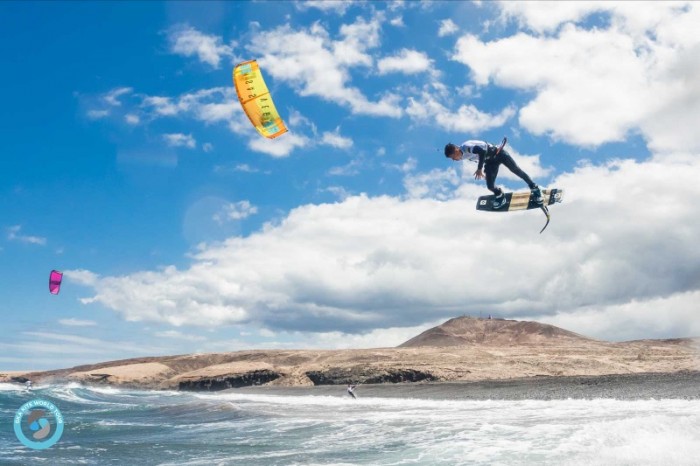 
Tour number two Maxime Chabloz then made his entrance and it looked like he was perhaps saving himself for the later rounds (he wasn’t breaking out the kind of bangers he’s capable of) but he was smooth and composed and took the win comfortably.

After that, Liam Whaley delivered the most consistently high scoring barrage of tricks of the day up to that point, regularly notching up high sixes and also a 7.2 to beat Luis Alberto Cruz from the DR who actually had the highest score of the heat - 7.3 for a very clean 319. After a break from World Tour competition last year, Liam’s back with a vengeance and he could well be a podium contender at this event.

Carlos Mario was up in the final heat of round one and, like Maxime, he also focused on amassing easy scores for tricks comfortably within his repertoire. No doubt he’s holding something back for the crucial battles to follow at this event, but it may also have been to avoid aggravating the elbow injury that’s been plaguing him since last season.

The conditions were prime as the women’s heats began with 20-25 knot winds and growing flat sections in between waves on the falling tide. First up, a real upset as Bruna Kajiya was dispatched by Swedish rider Natalie Lambrecht in a super tight heat with only 0.4 points between the riders’ final scores.

Three-time World Champ Bruna’s got formidable freestyle ability, but she only landed two well scored tricks while Natalie landed more, including a stretched out s-bend to blind. It goes to show, you can never take your foot off the gas in this game!

In the next heat, Hannah Whitely beat Dutch ripper Pippa van Iersel with a textbook back to wrapped off a wave and then Therese Taabbel won the last heat of the round with some higher scoring moves including a super smooth s-bend to blind.

By this point the wind was pushing past 25 knots at points and the riders were competing in four man heats with the top two progressing to round three.

Juan Rodriguez (another hard charging young Colombian rider) rode a near faultless heat with no crashes and two tricks scoring over seven points.

Luis Alberto Cruz clawed his way back into the fight, going from fourth place at halfway through the heat to first and then Paul Serin took a clean victory in the last heat of the round with no crashes and some high scoring tricks including a back mobe 5.

The action intensified as the semi-finals began to beckon and the opening heat of the round was an absolute freestyle masterclass.

Valentin Rodriguez won it by 0.89 points with the highest combined score of the event so far - 33 - and the biggest single trick score of the day as well - 9.43 for a KGB7!

The last heat of the day would be the second heat of men's round three in which Maxime Chabloz combined four big scoring tricks, including a BS 317 and a 319, to accumulate yet another 30+ point overall score! No more holding back, this was Maxime going for broke and coming up golden.

The riders would no doubt have been happy to continue with the semi-finals so close, but fading light meant today's action was drawn to a close at the end of men's heat 14. The day finished with men's round one and two (and most of round three) and women's round one now complete.

Check the heat ladders below to see what's coming up first tomorrow (Friday 14th) when the men hit the water once again for heat 15 and the women pitch into round two. 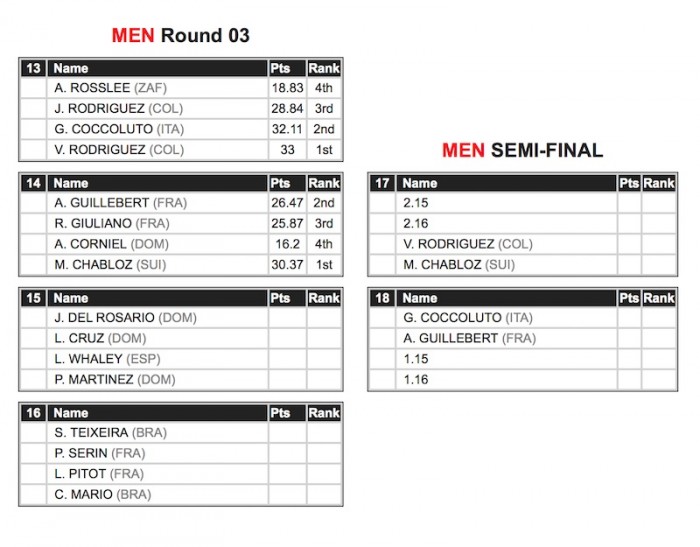 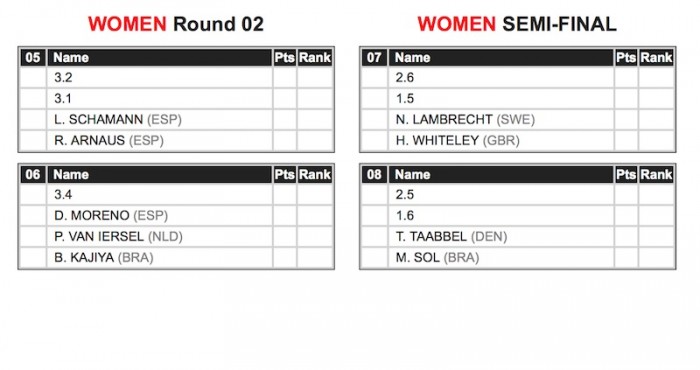 Thanks for the summary of day one.
Was there a livestream? Would like to see that 33points heat by rodriguez.
Top