Would you all please talk about kites or have you found a platform to argue about whatever else exists in your lives. Wrong platform
Top

Kiting community will always be interested in ever changing climate. Changing Jet Stream pattern effects winds from Canada all the way to Cuba. El Nino, La Nina, ocean temps, global temps all effect winds. If you try to politicize it, well you are going to get punished, not by Toby, but by the climate.
Top

My gender is feeling quite fluid. I have decided I am a kite now, well actually 3. So really this whole forum is more relevant to me and my feelings, especially my feelings, than anyone else's. So please be respectfully and refer to me as Kitey kite kite foilholio.
Top

Now where is my tinfoil hat pic 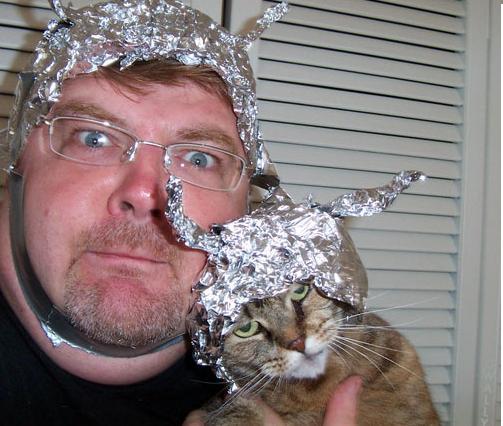 foilholio wrote: ↑
Fri Nov 01, 2019 9:46 am
<Snip>
I think you may be confused on my position. I believe in climate change, man made climate change. I even believe there is a risk from man made climate change. I however think the risk is absolutely tiny and the outcome will most likely be minor temperature wise but quite beneficial for the majority of life on the planet. I do think it would be wise even given the minor risk to limit our CO2 as quickly as possible, as playing roulette with our only planet is not wise. I don't think any political action will have any substantial effect on limiting CO2 production. I think new technologies will ultimately drive us economically to stop burning carbon. I predict that after we have stopped burning carbon, grown up, gotten over WW3, we will resume mining and burning carbon purely to raise the CO2 and so advert further ice ages but also increase the productivity and total mass of life on the planet, we will at that stage however be a multiplanet species of some quite high capability.

If you wanted to do something to limit CO2 the actions being taken by the climate alarmists are not going to work. They are divisive, and you really need a unified action to actually do anything on it. I would suggest a singular push by all governments on one thing, batteries and improving them. But hey maybe I am not smart

Obviously you're one of the fortunate members of our planet who has a mainly urban existence where money can supply kite gear, food, water and the necessities of life... for now. You can indulge in the fantasies of maybe climate change is OK, after all CO2 is invisible and plants need it to grow.

Meanwhile in the real world in many countries, including Australia, the impacts of what the majority of relevant science based professionals believe are the many and varied responses to CO2 increases are occurring. Nine of the 10 warmest years on record in Australia have occurred since 2005, and we were already a hot country. The increased evaporation and changes in rainfall occurrence have led to thousands of sq kilometres of formerly viable agricultural land being reduced to dustbowl conditions in the worst drought in recorded history. The towns, cities and villages in these areas are being decimated and people are leaving, increasing the population pressures on our largest cities which were not designed for these increases.

Our kelp forests are one of many marine ecosystems under threat as warm water travelling further south than before has virtually wiped them out. Fish and other marine creatures are disappearing with these ecosystems. Australians fisheries have been severely diminished as a result of this type of occurrence.

One of the little known facts about CO2 increases is that, just like soda water, CO2 dissolves into our oceans temporarily slowing its impact on atmospheric climate change. The result of this is a more acidic ocean. The building of skeletons in marine creatures is particularly sensitive to acidity, and many of those creatures are an important component at the base of the ocean food web. Meaning that if they fail to thrive so does everything above them. Coral reefs comprise a massive amount of the calcium based organisms which will also be threatened and already are by the twin effects of ocean warming and acidity. Some marine life thrives under these conditions such as algae. It's no surprise to learn that algal growths are also smothering coral reefs. You can also imagine the impacts of floating algal slime on your hydrofoil, not good.

I could go on, even today while I was kitesurfing, bushfire smoke from major unseasonal bushfires hundreds of kilometres north of my beach have cut visibility from tens of kilometres to just a few km. People with respiratory issues have been advised to stay indoors by our health authorities.

My point being is that human induced climate change is having a massive range of impacts so that the few benefits that may ensue are outweighed by the negatives and unintended consequences. Whats the point of having an atmosphere which may add a couple of percent to a plants growth rate when there is no water for the plant to grow or the temperature is too extreme. Sure there was climate change in the past, the planet has had higher concentrations of CO2. But changes occurred over geological time scales, (apart from catastrophic asteroid strikes). Over geological time scales life on this planet has time to adapt. Plants and animals, whole ecosystems, can migrate over geological time scales ensuring their survival or adaptation. However now change is happening of time scales of just decades!

If you live and travel to areas where you are shielded from the impacts of climate change you may think I'm being alarmist. Come to Australia and you can travel to places and see what's actually happening outside your cocoon. And if you feel that it's all a bit depressing, don't let that stop you from making small changes in your life which have a positive impact on the health of the planet. That will probably have a more significant effect than waiting for politicians to act.

Or, its the internet. If you don't want to read about climate change discussions, just don't click a button and you don't have to read anything. But I will admit its tempting to see peoples world wide perspective and all the different views

Exactly, no need to read a topic...you are an adult and free to choose what you want to read or not.

But two topics about the same is a bit too much...which topic should be closed in favor of the other?