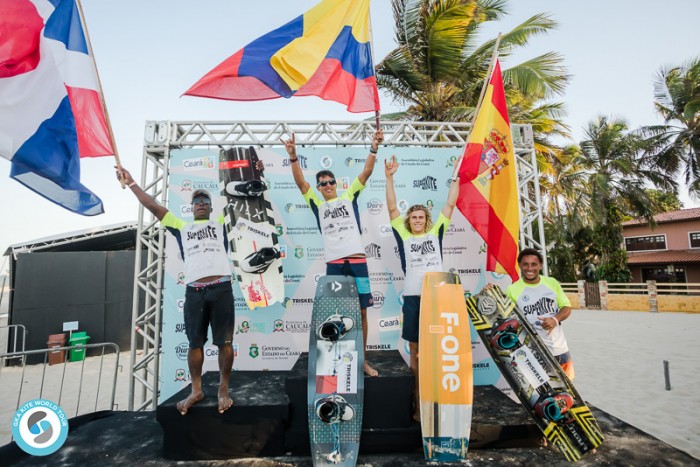 It took three incredible nine point scores and an 8.97 to do it, but 17 year-old Valentin Rodriguez from Colombia claimed his first World Title on Thursday afternoon in Cumbuco at the final GKA Freestyle World Cup event of the season – the Superkite Brazil.

Never miss a thing on the GKA Kite World Tour via the website!

Dominican Adeuri Corniel held a small lead over Valentin at the top of the championship and, coming into this final event, the title was down to a fight between these two.
The situation was that if they both made the final, then whoever finished higher would win the title; it was that close and in the event of a tie on points (if Val won in Brazil and Adeuri finished second), the countback result scenarios favoured Val.
They both dominated their way into the final. Val was very steady in his quarter final and then stomped two warning shots in the way of a slim 9 and heart attack 7 in his semi, both scoring over nine points.
After also cruising through his quarter final the Dominican then turned up the heat a little more in his semi-final. He found his only nine point score on his last trick, a heart attack 7, that ensured he finished the heat in first position. Ahead of Liam by just 0.5 points, but it meant that he'd have the advantage of watch the other riders by going last in the trick order for the final.

Liam Whaley had put together one of the best heats we've ever seen in freestyle competition in his quarter final, literally not putting a foot wrong. Having one of those sessions where everything looked pre-programmed and effortless, he scored two tens; firstly for a heart attack 7 and then sent his fans delirious with a stunning back mobe 7. Impeccable take-off, control and the sweetest of landings. His was the highest heat score of the day (and in recent memory), 37.53.

Dominican Luis Alberto Cruz also made the final after demonstrating unbelievable power off the inside kickers, letting his momentum and fluidity flow through his tricks. The commentary team's microphones dripped with their drool over his very unique tantrum styled front blind mobes, but it was his ten point scoring frontside 9 that dropped jaws. He rocketed off one of the day's steepest kickers to perform easily the biggest kite-low trick this tour has seen to date. Like a snowboarder off a ramp, he kicked so far above his kite lines that the success of the move was purely down to his body's motion.

We'd been gifted the winner takes-all final with the tour's top two joined by a pair of the most uniquely stylish riders you could hope to watch.

The pace was electric at the start. Val was first in rotation and after two tricks had really set his stall out – a shifty front 9 that scored 8.97 was followed by a super smooth slim 9 that stacked up a further 9.27 points.

Liam was chasing closely behind with Luis Alberto in third having stomped another huge 319.
Adeuri was up next when a non-competitor - a freerider from upwind - had managed to drop his kite right next to the competition area and drifted into the zone. What followed was unbelievable; the kite lines got caught around the rescue jetski's prop while the lifeguard and rider seemingly had a discussion. The competition went on hold for a whole hour while it got sorted out. The situation went from comedy to serious.
You can't run a competition like this where riders are operating on the edge of adrenaline and pushing the limits of themselves and their equipment without safety support at the ready. The crew and the several other beach lifeguards looked nervously upwind to check the wind line as mechanics unravelled melted lines from inside the ski.

The wind thankfully remained constant and when the competition eventually re-started Adeuri was still to follow the three nines that had dropped from the other riders on trick two. He was already over ten points behind Val. The Dominican rode out fast and positively, found a chop for a pretty good backside 317, but got a bit off axis through the rotation and ended with a slight butt check. Just 7.97 for that one; he now trailed Val 15.9 to 18.24 after two tricks each.
Val piled more pressure on with a clean heart attack 7 before Luis Alberto Cruz smashed out another 10 points for a huge slim 9. So rad – when he makes his landings, Cruz kills it.

All eyes were on Adeuri who went for a 319 but again landed a bit too back foot heavy, once more failing to break into the eight point scores.
Val bailed on a backside 10 attempt before Adeuri finally struck gold with a big, slick KGB7 for 9.73 points.

Val only managed to score 7.6 for a faulty backside 317, leaving a chance for Adeuri to hit the front on trick five if he could score 8.59 or more. He charged out but clearly something put him off on his take-off. He couldn't even attempt a pass and just rolled through an S-bend, a disaster with just two tricks left.
Liam had started mis-firing mid-heat and looked like he was in a battle for third with Luis.
Valentin looked hungry and was still trying to smash out his tricks within the first 20 seconds of his minute. This time out the back and, despite a sketchy looking take-off, he managed yet again to find a good landing, earning 9.43 for a KGB7. He stretched out a 10.42 lead over Adeuri, but the Domincan had two tricks left, so technically could still do it.

It was now essential that Adeuri landed a good trick to improve one of his scores or it was all over. He landed a decent slim 9. And a decent score he got! 9.4! Back to you Val...

Val had two scores already over nine points and the lowest score in his top four tricks was the 8.37 he had for a heart attack 7. He could do better. Deep breath, he powered out to the section out the back where he'd been finding joy for most of the heat and smoked it, rewarded with a 9.63.
Punching the air and rocking his head back, he’d done it, moving more than ten points ahead of Adeuri.
Val came back to the beach and was mobbed, claiming his first championship at just 17 years old.

Valediction: the contest was over!
Liam was still in the fight for third overall in the standings, so there was still business to be done. The Spaniard fired in to the beach left foot forward, went for the mobe 7 but only made a 5, which didn’t improve the 7.7 he already had in that trick category.
However, although on the livestream we saw that Luis had beaten Liam into third, but in the end after review it was clear that the judge's scoring tablets had an error.
Luis scored 9.4 points on his second trick, which the judge’s scoring tablets had wrongly listed as a backside 319. It was in fact a frontside 319. His score for that trick remained the same, but it meant that his last trick – a 317, which had scored 7.67 – was also in that same family of tricks, so didn’t count. As his four scoring tricks needed to come from four different families, it then meant that his fifth trick – a backside 317, that scored 4.83 – would now need to be included in his new overall lower heat score. All this crucially meant that Liam Whaley overtook him into third at this event, pushing Luis to fourth and further helped Liam’s overall championship standings...
VALENTIN'S DAY

It's a distant memory since a pretty much unknown teenage rider has created such a buzz in their first World Championship season... never mind coming and winning the thing at their first attempt.

Val is special and exhibits an incredibly powerful riding style that seems unbelievable from such a slightly framed 17-year-old. Who knows what he'll be capable of as he gets stronger and stronger over the coming seasons. Hopefully he'll always keep the smile he's been riding with all season though, ever since storming his way to the podium at the first event of the season. “Hello Colombia!”

Hats off to Adeuri though who takes the Vice World Championship title for the second year running and has shown an incredible fortitude to ride out the hardest of landings and an undeniable passion for powered freestyle. Although he'd said that he was only here to claim the title, he looked genuinely pleased for Val and understood how well the Colombian had rode.

Adeuri: "It was a really great fight, but Val is super good. Coming to this event in first felt great but now I'm looking to kick some ass next year."

Val: "I have no words now. I just want to thank Duotone and everyone who is supporting me and I’m looking forward to sending it even more!”

After seven events there are three discards, so the top four results roll out like this:

by zloilyoha
he was simply amazing!!!
All times are UTC+01:00
Page 1 of 1
Powered by phpBB® Forum Software © phpBB Limited
https://www.phpbb.com/