The craziness is underway in Cape Town

Blackened, I ride the MyCiti bus back from Holbaai. There's a few locals and a couple other ex-pats and Europeans who do it too. I've also seen people call an Uber for a ride back, although I doubt they get good evaluations when three guys in wetsuits with kites and surfboards expect a ride back in a sedan! Last night a passing kiter kindly gave me a ride back just after sunset, as the wind filled in late and I started my downwinder at 5:30.

I've kited every day this week, but none were as good as Tuesday, that is, until today. WOW, what a wonderful day. We finally got some really steady wind with perfect direction, and some decent swell with good period. It was perfect for the local SAKA-organized strapless wave-riding competition at Kite Beach (pic). 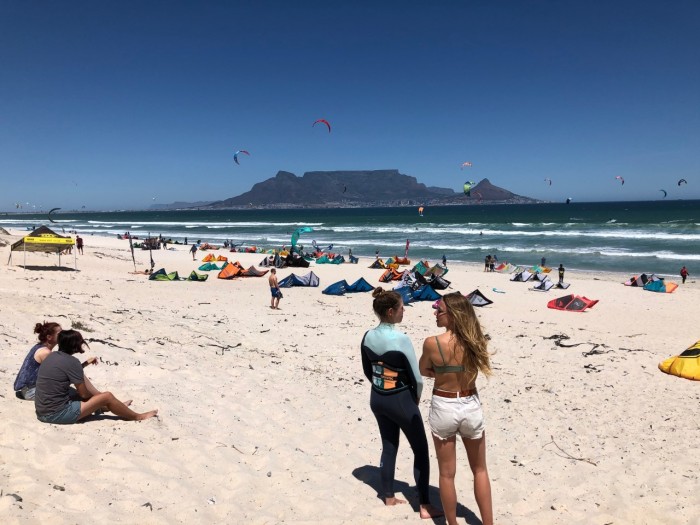 I launched on 7m and strapless surfboard at Kite Beach around 1:00 after watching some of the wave-riding, and did a downwinder to Holbaai as usual. With the SEaster having blown all night from yesterday, the water was crystal clear and blue-green, but very cold. The waves were great for riding. On the section around the rocks from Doodles to Big Bay I encountered a feeding frenzy of hundreds of seals and dolphins. The former would poke up their heads and check me out, but the latter were wonderful. In small groups they would come straight to me and ride along for about 50m before breaking off. I'd turn and another group would join me, just magic watching them ride just under my board and alongside. Had about twenty tacks like that before leaving them. The section north of Big Bay was awesome as usual, with lovely crescent-shaped waves peaking beautifully for a fast scoot below the peak. Down at Haakgat I noticed a large sailboat coming towards shore and headed out to check them out. I caught up with them about two miles offshore, something I really should not do, but they were a great sight, beating hard into the SEaster, a large yacht called Warrior SA1800 with 8 guys on board. I believe they were the leading yacht of a weekend offshore race to Mykonos in Saldahna Bay and back.

Back at Kite Beach around 4 the wind stepped up a bit (see below) and I launched the 7m Pivot again on TT, riding briefly with local friends David and Rory, who had spent the afternoon there. Conditions were near perfect, with large swell and long periods and few other riders out, so got a lot of big jumps. Took a break to watch the finals of the men's wave-riding - very impressive that those guys can do strapless in such big waves, smacking the lip and most times managing to ride it out. From 5-6 I had an awesome session, just did not want it to end. Almost nobody else still out, and massive jumps, some of my biggest ever. I'm usually a little tentative hanging it all out on a 7m jumping because a lull will lead to a crash landing, but there were no lulls, so every landing was powered and sweet. I really did not want to stop! 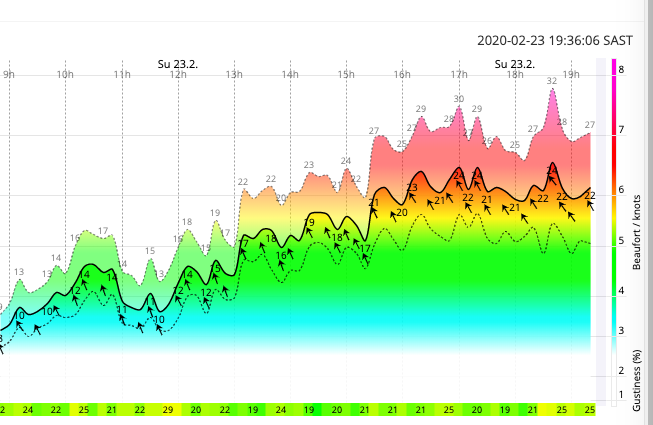 That's awesome. I'm super jealous of the CT wind. It's so much better. Yesterday I was on a 10m in 25-30kn and underpowered. Same conditions in CT and I'm juiced on the 9m. Had to relearn how to kite. You don't have 10s every jump to sort out your looped landings.

CT wind is just epic. Hopefully will head over again for the comp next year. Will look forward to your play by play leading up to it

Brand Affiliation: None
Has thanked: 20 times
Been thanked: 10 times

Yes, hard to beat Cape Town for big air especially when everything comes together. I spent this season playing around with different kite sizes in different conditions and ended up realising I rarely need a 7/13.5m so next season I'm just going to bring 8/9/10m and strapless for lighter days. Were only 3 days this season since November when I needed 7m and all were gusting 50+ knots and 13.5m I just found too slow when swell was up (more fun in flat for old school). Helpful to have the BKA meter to compare actual wind speeds and fine tune kite sizing for future sessions. Been busy planning my next destinations and researching big air spots around the world. Will be interesting to see how they compare but I think it's going to be tough to beat Cape Town. Tarifa in Apr/May, Guincho & Viana do Castelo in June, El Medano & Paros/Naxos/Prasonini in July then NE Brazil in Aug-Oct before heading back to Cape Town in Nov.
Top

jj83, that's the kitesurfing life! I'm going to try to sail across the Pacific instead on a 34ft sailboat I bought in Panama in October.

Anyway, today had little wind forecast at Bloubergstrand, and I had an errand in Noordhoek, so Witsand was the call with a 15-20 knot forecast. Got there around 2PM and second kite out. Wind was light inside but strong outside, and sets of monster waves were coming through. Too intimidating for strapless surfboard for me, so TT it was on 9m and a lot of fun with big jumps going out and some wild rides coming back in, reminiscent of this Langaree video from two seasons ago -


Lots of other interesting things going on too. Two guys were out on foil SUPs, sticking to the north end of the beach where the waves were not so big, but still very impressive just to get out there let alone ride some of those swells on foils. Later a guy on a 9m white foil kite and strapped foil board came out and was ripping it up with some huge jumps, plus amazingly another guy on a strapless foil board was able to get out through those waves, and then properly ride them back in on a 5m kite - serious respect. And then a wing-foiler who spent about 30 minutes of struggle to get out, but when he did was ripping jumps off some of the swells on the north end of the bay. But the most remarkable was Vegas man's little daughter, the cutest 8-year-old who was riding a 6m kite back and forth about 50m from the beach through the first few waves and back. Not only did she stay upwind, but she did little jumps off and over waves, and had amazing kite control, not dropping it once in the hour she rode. Truly impressive, so I had a chat with her dad, very pleasant in person, and she already has Duotone sponsorship! She is an absolutely delightful bundle of energy and a future world champion. Her Instagram is https://www.instagram.com/serakiteofficial/. I came home via Chapman's Peak and Landudno, Camps and Clifton Bays, and watched the sunset at Bantry Bay with a pod of whales cavorting out to sea. Lovely day all round. Just three days left.

My penultimate day was yet another forecast SEaster, which I watched come through from my flat in Milnerton at lunchtime. The meters at Rietvlei and Bloubergstrand only showed it from around 2:30, and at 3:00 I launched 9m and surfboard at Kite Beach for my usual downwinder to Holbaai. Warm but murky water resulting from the SWester yesterday, and not much wildlife except two sunfish. Had the entire section from Big Bay north to myself, even Haakgat was deserted. Back at Kite Beach it was blowing hard by 5PM, so rode 7m and TT for some jumping, but not as good as Monday because the waves were nearly non-existent and the wind gusty with a little too much east in it. Still better than nothing. My final day tomorrow might be a big one, with 30 knots SEaster and 4m swell. 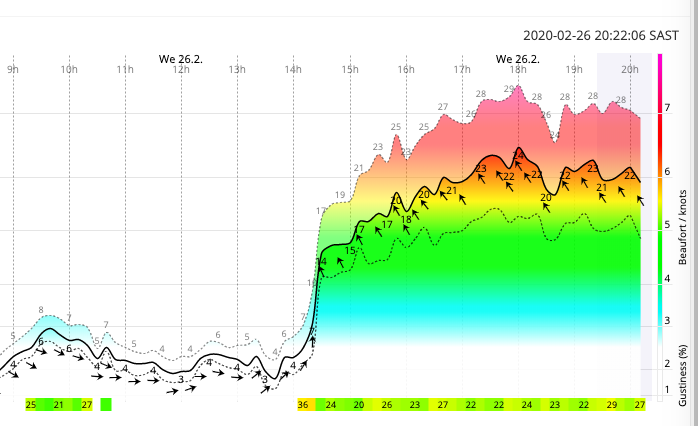 As forecast, today was really windy, not only did it blow all night, it blew all day. I got going early around 11AM, on my regular downwinder from Kite Beach to Haakgat, but after trying to fly my 7m Pivot, I landed and changed to 5.5m Cabrinha Nomad, a 10-year-old kite that still flies well. It was perfect on surfboard. I had met a couple of Germans in Witsand the other day, and they were keen to join me. Laurenz launched on 8m, which seemed a lot to me, but he is a big strong young guy. Vanessa launched a 6m Core. When we got down to the section of rocks around to Big Bay, Vanessa bailed and actually kited all the way back upwind to Kite Beach! Laurenz and I had a great run down, with some large swells coming through for thrilling rides. Back at Kite Beach, we met an Australian, Sean, who I've seen several times, and he joined us for a second downwinder. This was around 3:30, by which time the wind had really filled in and was howling. Stupidly I tried going on 7m, but my middle bar line snapped, and a wave caught the kite and tore it in half. Laurenz was overpowered on 8m, while Sean did fine on 6m. Re-grouping, Laurenz bailed, but I launched on 5.5m again and TT, and did another downwinder with Sean. What an excellent run, huge waves north of Big Bay, and noone else around, except one super kiter on an 8m Core who launched endless huge jumps. Indeed, on the way down Kite Beach we encountered Mike MacDonald who was launching the biggest jumps I've seen all season, surely 30m. An awesome last day of three months of Cape Town kiting. 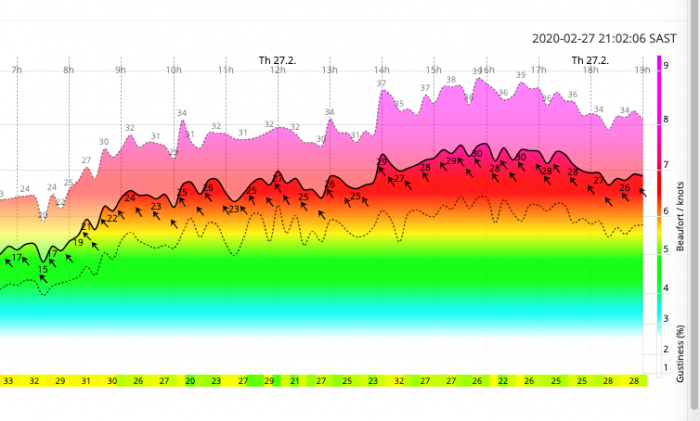 Hugh2,I'm sorry I missed you in CT,maybe next year . Was there for 2 weeks and feel I just got the place understood. Your postings helped and gave me perspective . Looking forward to spring here in NY, you get this way send a pm to me .If it blows we can kite any direction,not always the ocean but somewhere .
Top

Hi ELI, indeed would love to, but I am headed to Panama to go ocean sailing on my new-to-me 34ft sailboat. Back to Cape Town in December, I hope. Maybe see you then.
Top