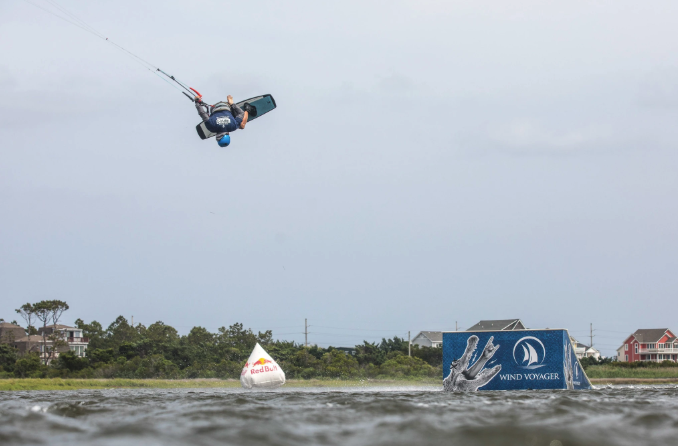 Over the past fourteen years, the Wind Voyager Triple-S Invitational has changed the way we think about kiteboarding and kiteboarding events.

In 2006, the #WindVoyagerTripleS was the first ever, slider and kicker kiteboarding event. In that year, and in many to follow, the Triple-S crowned champions in surf, slicks and sliders, as well as overall, to define the cutting edge of our sport. There was no prize money. The trophies got left behind. The event was judged by the riders themselves. There were parties in the backyard at "The Slick House", as well as after hour ragers we really shouldn't talk about on the internet. Strapless kitesurfing, kite low powered wakestyle and park riding. The Triple-S put these new riding disciplines on the map.

Starting in 2012, the Triple-S switched to using judges to score the event and introduced prize money. After achieving our goals of changing the direction of kiteboarding competitions, with many following worldwide, our next goal was to provide substantial prize money. Thanks to the generous support of title sponsors Venyu and Wind Voyager, we were able to raise the stakes from bragging rights, to $10,000, to over $70,000 in just seven years. In 2019, the Wind Voyager Triple-S Invitational joined the Cape Hatteras Wave Classic presented by Patagonia, as the first two kiteboarding events in the world to offer EQUAL prize money for men and women.

Competition is key, but the social scene of any good event is what defines the total experience. Whether it be low key gatherings, making new friends from around the world, or going to the best live music performance of your life, it is often these key interactive moments that you remember far longer than the event itself. In 2006, Triple-S rider Davey Blair asked if he could bring his friend "Big Hair" to the event to DJ the awards party. That year, we opened with Red Bull's DJ Chela and wrapped it with Big Hair, all on the back deck of The Slick House. What followed after that was a string of performances that should go down in action sports live music history, including international super stars Mix Master Mike of the Beastie Boys, DJ Qbert, Kymani Marley, 2Chainz, Future Fambo, Tanya Stephens, The Dubplates, Method Man, Red Man, and The Roots. Let's just say, Saturday morning after the event was over, was the quietest day of the year in our little town called "Waves".

Triple-S goes Hollywood?! Directly after the 2018 Wind Voyager Triple-S, a Hollywood style movie called "Send It" was filmed onsite at REAL, using the Triple-S as the backdrop theme. Think "Blue Crush", but instead of surfing and Hawaii's North Shore as the backdrop, it's kiteboarding and the Triple-S. Written/produced by Charlie McKinney and directed by Andrew Stephens, Send It is a "boy meets girl", action/drama with a star studded cast including Kevin Quinn, Claudia Lee, Patrick Fabian, Denise Richards, 2-Chainz, Richard Branson and more. Look for a future release of Send It to bring kiteboarding and the Triple-S to the mainstream.

While all this may seem impressive, many view the philanthropic arm of the Wind Voyager Triple-S Invitational as being one of the event's greatest achievements. This was started in 2011 by Sensi Bikini's Founder Sensi Graves, and then handed over to the Triple-S Steering Committee in 2016. Between 2016 and 2019, the Wind Voyager Triple-S raised over $140,000 for the Hatteras Island Youth Education Fund.

"It's an incredible feeling to redirect the international Triple-S spotlight, and place it on the local youth of our community. Thank you to everyone, including our title sponsor Wind Voyager, who have made these donations possible."
Trip Forman - Wind Voyager Triple-S Co-Founder

"The Wind Voyager Triple-S could have never achieved what it did without the riders, our sponsors, our incredible event staff, the media who covered the event, the musical performers, and the fans. To each and every one of you, THANK YOU and huge congrats on an incredible run. Together we concocted a piece of kiteboarding history, and a road map of how to go forward with our sport. It's been an incredible fourteen year journey full of epic memories and friends. The Triple-S family is a solid one. Thanks again to everyone who was a part of it!"