Sorry guys, a bit of a delay on the GPS functionality update. It works, but I need more on the water testing before the release. Plus, I want to redo the code and use GPS on the watch only. The recommended Android location services solution is Fused Location, which uses phones GPS when connected to the phone. Unfortunately, if you start watch app with phone connected, and then walk away from the phone, location information is lost and doesn't switch to watch's GPS until app is restarted

. I'm going to rewrite the logic to use watch's GPS only...
Top

While kiting I don't want to much information on the small screen, this would be perfect
Jump height. + Max height
Hang time.
Speed + Take off speed last jump
Max speed.

For your amazing work.
Top

. It will take a while before Google releases it to the public (they say they are much slower due to the virus), but look out for version v0.70.

There are so many new things, that it will take a few posts to describe them. Here is an exiting one - now you can see jump information in almost real time on ANY smart watch (including Garmin) that can display text of notifications from Android phone (thanks for the idea Gintautas

). This solution is not ideal because you have to have your phone with you during the session, but at least now you can keep your phone somewhere safe in a pocket. Here is a quick demo:

Here is how to set it up:

Now on the watch app. Interesting new feature is no-touch screen toggle though Rotation gesture (thanks for the idea joriws

). Enable this option in Woo Screen settings. To use it, rotate your wrist back and forth 2 times (2 times needed to avoid accidental switches). Here is a short demo:

The Rotation gesture is mostly meant for watches without extra buttons (like Nixon Mission). For watches with extra buttons (meaning buttons other than the power button), it is easier to toggle the screens by pressing them (buttons). Gesture might be unreliable at times. It also might use more battery (not sure how much more), as it constantly listens and processes a stream of data from an accelerometer.

Gesture can have false positives (accidental screen toggles) from your natural arm movement. I hope I tuned it to an acceptable working level - I spent over a week trying different sensors and detection algorithms. This one is much better than anything I tested before. But if it still doesn't work for you, just turn it off, it will be exactly as it used to be

If I don't kite for a day I miss the nice emails that get sent out.

You could have real time updates during a session. If me and my mates are all out, I could request the highest jump at that location within the last hour and show it on my screen, see how I compare to everyone else out.

. It will take a while before Google releases it to the public (they say they are much slower due to the virus), but look out for version v0.70.

There are so many new things, that it will take a few posts to describe them. Here is an exiting one - now you can see jump information in almost real time on ANY smart watch (including Garmin) that can display text of notifications from Android phone (thanks for the idea Gintautas

). This solution is not ideal because you have to have your phone with you during the session, but at least now you can keep your phone somewhere safe in a pocket. Here is a quick demo:

Here is how to set it up:

Now another feature added to the watch app. The only reason that I had Previous Jump field (on the second screen) is that after a big boost WOO often catches and transmits a small 1-2m jump. The new small jump overwrites the big one almost instantly, so the only way for me to see the big boost was to look at the previous jump.

I added a settings option to ignore jumps under selectable height from 1 to 5m. The same option exists on PIQ (that is what gave me the idea), so it makes sense. Now the previous jump is not needed as much, so I replaced it with the Max hang time (same place on the second screen).

As I typed this, I realized that the app can check for 2 consecutive jumps and ignore the second one if it is much smaller. I'll add it to the next release

One more thing left. To be continued ...

OK, the last new watch feature (at least for now) is GPS speed. I have to say up front - there is no track history yet

. But, there are a few things that might be interesting to everyone.

As usual, you can enable GPS in Woo Screen Settings (it is off by default). I couldn't fit everything that is useful between jumps and speed on one watch screen, so when GPS is enabled, there is one more screen that looks like this: 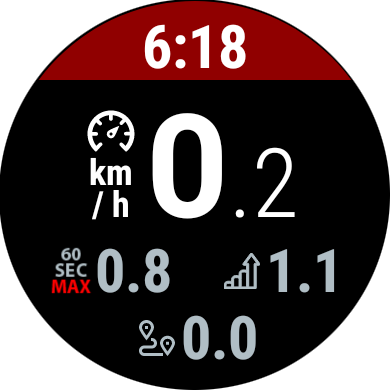 Coming from the top to the bottom:
- On top is the current time. The red background is there to quickly visually differentiate between jump and speed screens - they look very similar otherwise.
- In the middle is the current speed and units - km/h for metric or mph otherwise.
- The next one is the interesting one. I don't know if anyone else uses it, but that is my own invention

. It shows max speed during the last 60 seconds. Here is what it is for. When I do speed runs, they are usually under one minute long. During the run, I can't look at the watch. After the run, the only thing left is session's top speed, so if I didn't beat it, I wouldn't know how fast I was going. Hence, "60 SEC MAX" field. It will also most likely show your take off speed before the jump - chances are that will be the fastest point you can see after you land

When GPS is enabled, the Speed screen becomes a main screen. It switches to the jump screen automatically whenever any of the following occurs:
- Jump data received and displayed
- Woo connection state changes

Jump screen is displayed for 20 seconds and then switches back to Speed screen. You can also always manually switch between screens (remember Rotation gesture

?). 20 seconds on Jump screen applies to manual switching as well. 2 other screens still toggle back in 5 seconds.

Last thing to mention is the method to calculate speed. Right now I just use current speed provided by GPS. I also tried calculating it from last 10 seconds and last 10 sec in a straight line. Testing it on the water, there is not much difference between them. Sometimes GPS even does it better - way points can jump around on bad signal. I had 65km/h displayed sitting at home when I calculated speed myself based on distance / time. I'm open to suggestions though.

Distance is affected by bad GPS signal as well. Until it gets a good reception, you can see the distance increasing (from location jumping around) while you are standing. Usually it goes away when the signal gets better.

That is it for now

Maybe distance/time calculation of speed is too CPU dependant for the used purpose, I mean taking battery too much for the benefit and preventing CPU to sleep more or make CPU run at higher frequency? GPS speed could be doppler-speeds too if API returns that. Usually just if you have the track you upload it as GPX to ka72.com or use GPS Action replay for more official record or friendly competition. Those filter the speed spikes by G-force of acceleration and normally takes bad GPS signal away.

Track recording to watches internal memory would be cool (and push it to mobile after session) and the feature I miss the most from Xensr. Here is an example from Xensr-service with track and jump data combined.
https://my.xensr.com/session/#!e6265c34 ... 2715/1349/
Top

Actually Android GPS API returns timestamp in nanoseconds for every position reported - more than enough accuracy. It is probably Sportstracker's problem that it doesn't save it in GPX-file properly.

I think speed reported by GPS API is somehow already adjusted based on the current position's accuracy. At least that is what I see on the watches - when you start GPS, reported location can jump around, but the speed often stays at 0.

I used Xensr too (untill it died). GPS tracks are nice. They will be available, not sure when or in what form though.
Top
Post Reply
46 posts