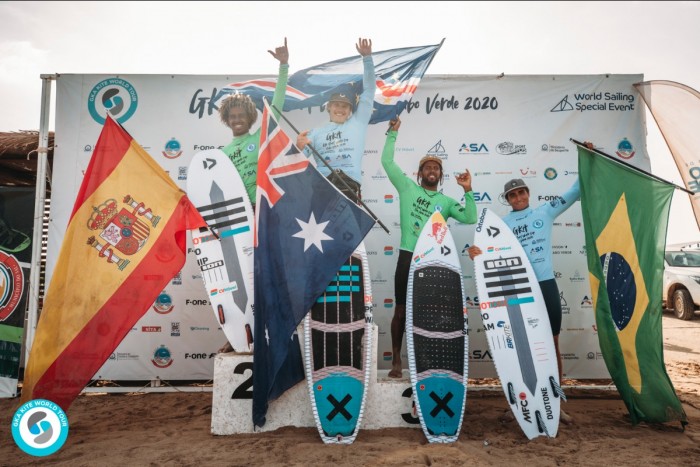 The GKA Kite-Surf World Cup - Cape Verde 2020 has come to an end! We’ve had some surprise results, and some very tight scores, but our Cape Verde event champions have been crowned and are now enjoying the party!

Last year we had barrelling waves here in Cape Verde, but this year it seems that the wind, and wave gods wanted to test our rider’s and team’s nerves, sending some challenging conditions our way. Lighter wind and a lack of swell, saw the crew pack up the event site not once, but twice, and move to a new location. Proof that we go to great lengths to bring you the best possible action here on the GKA Kite World Tour!

The women’s division ran first, with Ines Correia PT and Mikaili Sol BR facing each other in Heat 1. Both women were giving their all, but experience and that vital insider's knowledge gave Ines the upper hand. She may have felt the pressure coming from the youngster, but it didn't affect her wave riding. She kept the power and fluidity consistent as she rode, and rightly so, was awarded the higher points in the round. Ines took a combined score of 10.86 beating Mikaili’s 6.53 and secured her place in the final.

Peri Roberts AU faced the reigning Kite-Surf World Champion in the next heat. Both these women ride with power and great surf style, the judges had their work cut out with the scoring. Carla Herrera SP has more competition experience, but the Australian rider did not let this unsettle her game plan, she managed to link powerful hacks, bringing home the higher scores needed to get her into the final. Peri went through with a complete score of 10.20, knocking the World Champion into the mini final with her 9.23 score.

The mini final saw two world champions battle head to head for 3rd position. Mikaili Sol, our current Freestyle World Champion, faced the Kite-Surf World Champion, Carla Herrea in a closely scored heat. There was a lull in the waves, making things even more difficult for our champions, but being the best in all conditions is the name of the game, and Carla’s experience gave her the lead in the small waves. Her complete score of 8.73 secured her 3rd place on the podium. Mikaili’s close score of 8.06 will no doubt have Carla, and the other women on the tour, keeping a close eye on the youngster in the upcoming events. If Mikaili starts putting in the wave training, we could be seeing her in Kite-Surf finals a lot more often!

Ines Correia and Peri Roberts, two event favourites faced each other in the final. Peri has a strong Aussie surf style, she has no fear, rides hard and with power. Ines is comfortable riding her home spot, and with the support of the home crowd. Ines rode intelligently, linked smooth turns and some powered hacks. These women were well matched, and the scoring was tight, but Ines edged forward, took and then held onto the lead, with an impressive 7.00 wave, and with a complete score of 12.74 she won the heat and the event! Peri took a very respectable 10.50 and a well deserved second place. Huge congratulations to Ines Correia for taking the title in such difficult conditions, what a start to 2020 for this talented woman!

In the men's division Pedro Matos BR and James Carew AU were on the water in Heat 1. Throughout the competition both these riders have demonstrated their surf knowledge and skills, both come from a surfing background, and those extra board skills really help when conditions are tough, like they have been in this event. They both rode hard and with style but the Aussie James outshone the Brazilian, with a complete score of 13.43 against Pedro’s 11.60. It was an incredible heat to watch!

Home crowd favourites Matchu Lopes SP and Airton Cozzolino CV were next up. These riders have been friends since they were two years old. They went to school together, started kiting together, they ride for the same team and compete together on the World Tour. Both are insanely talented athletes, and this must have been an emotional heat to get through. Taking the win on your home turf is something every rider wants, and for Airton, our current World Champion, it is something he has not yet achieved. Battling for it against your best friend, and teammate has got to be difficult for both parties. They pushed each other to the max, with incredibly close scoring for their technical riding, but Matchu took the World Champion out of the running for the final with a 14.20 complete score with just a .20 difference.

In the mini final Airton took 3rd with a complete score of 12.97 against Pedro’s 11.50. Hats off to both these riders for such a great start to the competitive year.

The final between Matchu and James had all the excitement you’d expect at a World Tour event. Matchu took an early high scoring wave and seemed to be comfortable sitting out back waiting to select his next. In the meantime James was racking up his scores with a nice vertical board, and those powerhouse hacks. The waves seemed to disappear and scores came through, the young Assie was in the lead. Matchu needed another high scoring wave to get back in top position, but this time his patience waiting outback was not rewarded. James won his first ever GKA Kite-Surf World Cup event. He has been pushing hard and has been hunting for this win for a long time. James grew up around the ocean, and is an all round waterman, just like his father Sean, who will no doubt be celebrating this win with as much enthusiasm back home in Australia. Congratulations James Carew we’re stoked to see you on the Kite-Surf World Cup podium!

What a great set of finals for our first event of 2020. New names making the final rounds in the women’s division, and powerful riding across the board. Both our current World Champions, Airton and Carla, taking 3rd positions on the podium at the first makes for an interesting start to the season, and what a comeback for Matchu!