Hi everyone, I was wondering if any of you can help identify an early Naish bar for me? I've looked on their site at early catalogues but no luck. Thanks in advance 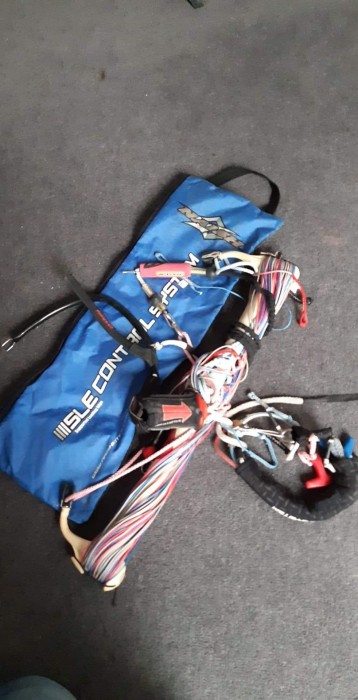 looks like a 2007 naish helix convertible 1:1 and 2:1 control bar. I wouldn't use those for anything except to part them up you can use the control bar, leaders lines and pulleys for a project. the bar itself might be worth $25 for parts the lines maybe $50 or more if they haven't been used at all, nothing if they are worn.

It doesn't have a modern safety flagging system so it can't be used with modern kites but the parts are worth something.

Thanks EDT, I wanted to use on a 4m pansh genesis I'm guessing by your comments it wouldn't be compatible?
Top

More not safe than not compatible. That bar can be built into something usable with a new QR and clam cleat, but you would need to do some research.

Oh for a 4m pansh? I guess use it for now until you get a modern control bar. Just remember you are probably going to full release if you get in trouble instead of using the QR to flag the kite. Make sure there's nothing downwind of you if you have to release. Usually foil kites crumple if they crash and that kite is pretty small.

I had a Naish Boxer SLE back in 2007. I think the bar is the standard bar for Naish SLE kites from that year.
Check this link: https://www.mackiteboarding.com/boxer07review.htm and scroll down to the bar photos.

If I remember it right, Naish had some versions of the bar with different length of the depower stroke and also a version with five lines. You can easily rebuild that bar to fit any modern kite that flies with a standard four line low Y setup (=most kites). The chickenloop is a push-away release that works just as on any modern bar, even if I don´t like those neoprene covers that makes it hard to see if something is about to break. The depower system with the pull-pull straps is also fully functional as long as you don´t get too much salt on it and is made with metal parts that lasts forever, if you keep track of corrosion. Some of those Naish bars from that Era came with what they called a "mini 5th line" as a leash, which was just a fixed line that was connected to the top of the depower system, meaning that it had no flagout. Basically a classic suicide freestyle leash setup.

First, check how long depowerstroke you need for your kite. If you don´t know, try with a long stroke in light wind and get a feel for where the limit of depower is for your kite and then shorten the depowerline accordingly. Before you fly, check that all four lines are of equal length if you put the depower on maximum power. If they are, your kite will fly as good as with any bar. For your safety, make sure however that you have some kind of flagout leash (a double steel ring on a pigtail is probably the easiest in this case if it isn´t on the bar already) and that the push away relase of the chickenloop still works under load. If you have any problems with the chicken loop release function, you will need to replace that.
Top
Post Reply
6 posts • Page 1 of 1