That’s the advantage of having long arms, I do too

There is a number of modifications you can make to kites. The main ones are to remove weight and alter the bridles. You can also alter the fabric. Foil kites are particularly versatile in how much they can be altered, but on tubes you can remove struts and sometimes some other things. Bars are different to kites, in that you can modify them independently and ride the same bar on any kite.
Top

marlboroughman wrote: ↑
Sat Mar 21, 2020 7:37 pm
Don't take fifth line off. Make sure it is adjusted properly. Kite at 12 pull the bar all the way in. The fifth should have just a hair more slack than fronts, then it works like a bridle or even better than some early ones. By doing this you will get the most out of them and once that's perfect you could play with more depower.

This is great advice on how much slack you need in your 5th line.

You would think the 5th tensioned would be better but it's not. You want about 2cm or 1 inch of slack in the 5th line for maximum depower on an old c kite. Modern c kites like torch or Vegas have the 5th line tensioned but on the old kites you want exactly 1 inch of slack. Only the modern fuel btw needs this same 1 inch slack as the old C kites. Don't ask me why it all works this way I just know it does.
Top

The torch is amazing. I have a full quiver of fuels just because they are cheaper but if I were to get a new quiver of C kites I would get all torches. Back in the day I was entranced by this dumb idea that you could ride the fuel on 4 lines but over the years I finally figured out that all C kites fly way better with 5 lines. Yeah I'm not that smart it took me years to figure this out.

So that's the tradeoff. You have to ride it tensioned like it or not simply because the leading edge is so small. However the advantages vastly outway the disadvantages, the torch boosts higher has higher depower but retains all the nice characteristics that you normally expect in a C kite, tons of slack, great looping. Probably my favorite thing about the torch is just how good it is upwind. The fuel is a dog upwind because of that huge leading edge but it has to be big because you can ride it in 4 line mode.

Anyway, I'm selling all my fuels. I already switched to the enduro for unhooking and looping, pivot for boosting and the soul for foiling.

I might keep my 7 fuel for big wind days that kite is a blast.
Top

Did you write a review comparing these two in some other thread? If not it would be interesting.
Top

Did you write a review comparing these two in some other thread? If not it would be interesting.

No reviews. What kind of kite are you interested in? I was lucky in 2019 and was able to demo every 2020 kite I was interested in last year because we had wind at the same time our demo fest was scheduled. Pivot is the nicest highest boosting free ride kite you can buy right now loops great too but just one flaw no slack in a handle pass, that's why I need the enduro.
Top

Brand Affiliation: NONE F--- the corporate world
Has thanked: 112 times
Been thanked: 136 times

edt is right. I still have an old air rush c-kite that actually depowers with 5th line tension, but still flies reasonably well. But other c-kites do not respond well to that exact same setup.

And I am also clueless as to why this is.
Top

I have a Torch and a couple Fuels. The Torch was my main kite for about three years. My biggest airs are on that kite. I use an 11m fuel as my main winter kite for light air/unhooked. It's been stripped down to two struts. A pristine 7m fuel lies in wait. On the right day, it comes out like a sword, ready to go slay dragons! Such an awesome kite.

Agree completely with what EDT says. Agree with MM regarding slack WRT 5th lines, especially in the older generations (pre 2007) that the OP is talking about.

I use a trimable 5th line on Fuels but run the stock high Y set up on the Torch. The edge seeking nature of the Torch suits the longer 24m line set up for massive airs and easy upwind. That kite has loads of top end. The fuels are grunty and suit shorter lines. They have a single point 5th line attachment, not a split like the Torch. Tensioning the 5th has a different effect on shape. It flattens the kite, significantly depowering it. A cleated 5th lets you choose from completely slack, letting the fuel fly free with a little flex, to just off tight like MM refers to so the kite keeps all its power and doesn't deform at all, to actually tensioned, which flattens the kite a touch helping it fly further forward with less power for easier upwind, to over tensioned which pretty much completely neuters the kite for safe transit of sketchy ice or rocky shorelines with the kite up. Also super handy for sitting out squalls, ass in the snow, kite at the edge down low. Highly recommend this mod for Fuels. Many old C kites were strictly 4 line and do not have a suitable attachment for a 5th line. Have a look at yours. They all have a pump leash attachment, make sure its as reinforced as the pigtails are or you will rip it off the kite the first time there is any sudden load on the 5th.

As mentioned, you can take struts off C kites. I would only do this for foiling or snow kiting. It significantly lowers the kites wind range. I only use my stripped Fuel on snow in under 16 knots. That used to be its absolute bottom end on water! C kites are a really stable shape and won't invert easily. Easy enough to experiment with deflated struts to figure out which ones can go.

The only other mod I would try on older C kites is what *Matt Pendle did back in the day with Globerider kites. He ran a short line between two front line attachment points. just a simple loop of pigtail gauge line from front to rear front line attachments (they are only a few cm apart and not all kites have them). Just enough to make a short 10 cm deep V bridle. Then you run an SS ring with pigtail on the V. It extended the pivot point and gave it a little range on the line to better depower his C kites. Doesn't exactly make it into a Naish Pivot, but his C kites were the bomb and his thinking was sound. His ideas were often copied. Remember you will need to extend the rear line pigtails on the kite to match the fronts.


Matt Pendle is an unrecognized pioneer in our sport. Yet another Fenchman we owe thanks! He started at the beginning with WIPIKA. His legendary airblast was the first amazing C kite. Tricky to fly like everything else back then, but those things were the DNA behind all the first big boosters. His "KPO" or kite power optimizer bridle outlined above was the first of its kind on an LEI. He figured out bridles on LEIs early. The Globerider SONIC was the first really good bridled kite. So good it was copied pretty much panel for panel and named the Waroo. Remember the 9m Waroo? It owes everything to the SONIC.

Bottom line, If your old C kites have more than one option for the front line attachment (which many did) you have the option of a tiny V bridle for each front line that will give the kite a little better upwind and better gust handling. They will still be slow, underpowered, and heavy by todays standards. 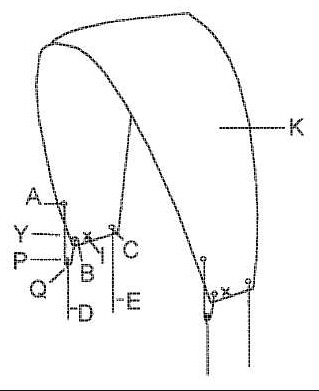