I've been through quite some pages here on custom bars where the whichard is used as connection to a rope style spreader, and this inspired me to mod an old bar with an equally old whichard.
But I thought the orientation would make more sense with the quick release as pushing instead of pulling.

I've actually tried this setup briefly with my Peak 4 on the beach and briefly on the water close to shore, seems to work OK. There may be more chance of wearing out the rope in this way as the hinge of the Whichard can cause abrasion. And I need to figure out how I can untwist the safety flag out to one of the front lines after rotations. 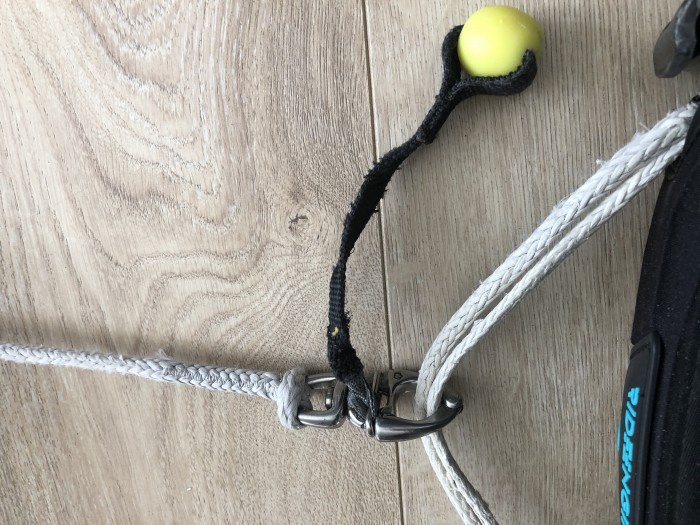 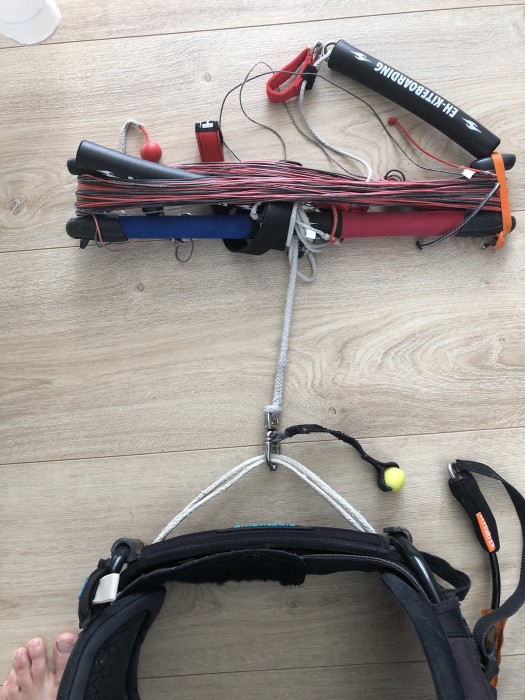 Any thoughts on this setup from more experienced bar modders on this forum?
Top

A drawback I see is that you possibly miss the yellow ball in a high stress scenario. Plus the ball will be flapping around, might get stuck between the slider rope and the harness (or somewhere else), and trigger accidental release (don't go into waves with this setup).

In the early 2000 years, when proper QRs where not yet available, we all played around with wichards a lot. There were solutions that used a thin pin connecting 2 balls on either side of the release trigger. It works, but not as well as a modern QR like the IQR
Top

I've got a similar setup, but I've gotten rid off the ball. It caused me some unwanted releases...not a good feeling.

Since changing to this setup, it works fine. No spontaneous releases.

Admittedly, I don't use it much anymore, since getting a rope slider chickenloop. I think because I still remember those accidental releases.

Mind you, I ride waves...and that's where the accidental releases happened. Being pummeled under water by a big wave...

I intend to learn how to foil coming summer. I definitely see myself using this setup. 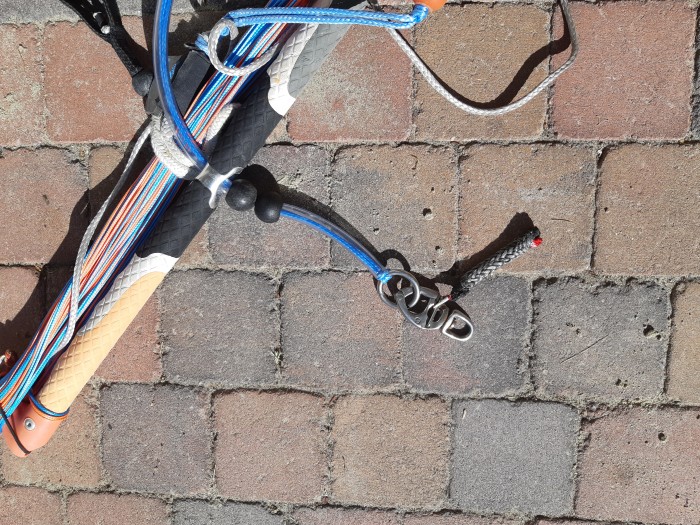 mede wrote: ↑
Sun May 17, 2020 8:33 am
A drawback I see is that you possibly miss the yellow ball in a high stress scenario. Plus the ball will be flapping around, might get stuck between the slider rope and the harness (or somewhere else), and trigger accidental release (don't go into waves with this setup).

In the early 2000 years, when proper QRs where not yet available, we all played around with wichards a lot. There were solutions that used a thin pin connecting 2 balls on either side of the release trigger. It works, but not as well [reliably as] as a modern QR like the IQR

The bigger Wichard as shown below is the safest Wichard with a ring.

Plus you could turn it and use the eye as ring on the rope.
Add a ring to the depower part.

And add two balls with a screw as release...won’t miss it...just slide down the depower and it will release.

In 2001 we tested with all Wichard and came up with this system as the safest. 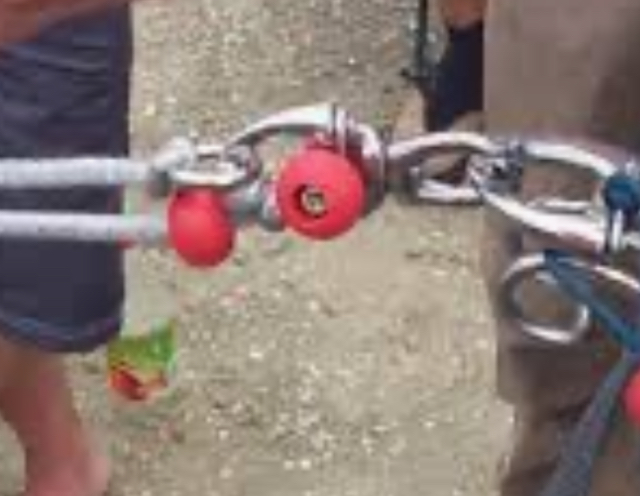 MUST turn it around! If your kite hindenburgs and you want to release, you won't be able to release otherwise, as there is no tension to pull against.
Top

I think it is quite important what it has to be used for...

The last thing, when hydrofoiling, you would ever want, is an undesired release.
Whereas being able to release fast, is not important, as you ride maybe a 5 or 7 m2 kite in 13 knots of wind (just an example to show how low power we are talking about).

So the release ball in a long line is way too risky for me when hydrofoiling, has to be a lot smaller so no risk of accidental release.

The other issue with this release is, how difficult it is when you self launch with stake method in light wind.

Kite on its side, powered up so it dont go LE down again, and not so powered that it falls back on its TE with the following mess on a narrow beach , you have to be really quick to run to the QR and connect.

With a wichard you have to connect something to hold the tight line, as you need two hands to close the wichard while hooking it on, and when closed, you have to release the extra "thing" so to speak.

Very bad solution for this kind of time critical launching.

Yes, if you can just slide launch, no problems, but not possible in most spots, and does not work if you want to use a linecam.
And yes, if windy so the kite can stay on its side (like if you ride on a waveboard or TT), no problem.
But in light wind, not good

This is the very reason I have went back to a CL on most bars, as it is by far the fastest way to get a stake start into your hook quick and easy.

And yes, we almost always self launch, even when more kiters on the beach, as then we know we can always land no matter what the wind does, and we can go out again to the others on the water, after a stop.

This is a older pic from Evan of infexion showing a solution with the flag out . Problem is the twisting can eject the wichard.
Top

Another option could be something like this, but with the flagging release being a BRM type release using the larger version of the Wichard bail above the swivel (ground to 4mm thick for the Cabrinha type release). 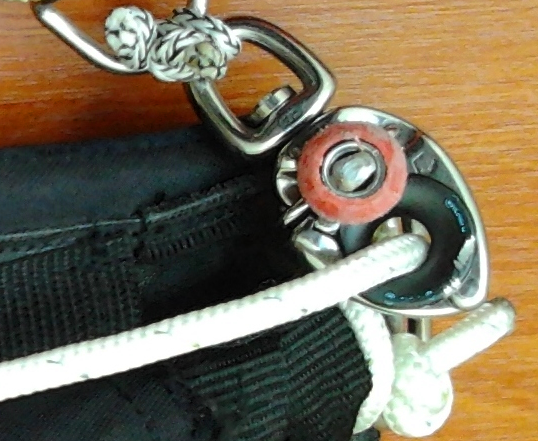 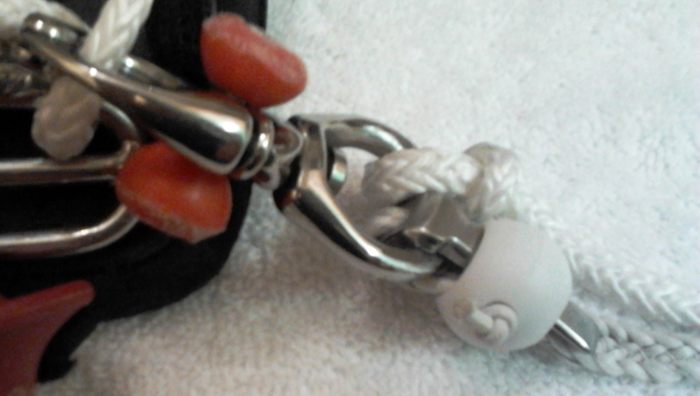 So the final release of the Wichard from the Wichard ring would be the equivalent of the BRM final release, but in this case, it would be a push away release instead of a pull release.
Last edited by ronnie on Mon May 18, 2020 9:18 am, edited 2 times in total.
Top
Post Reply
35 posts