I should point out that I have successfully solo launched at this spot many times. However, that is dependent on two things: the angle of the wind, because frequently the angle creates a wind shadow that makes it difficult, or impossible to launch; & the strength of the wind. In stronger wind with a decent wind angle, a side launch works fine - just requires extra care to make sure the lines don't snag on anything. In lighter wind the kite often will not sit reliably on its side so that I can pull into the air. I think this is partly because the wind at the top of the cliff is flukey ... until you get the kite higher up in the air at which point it becomes stronger.

An assisted hot launch would be just the ticket & this is the frustrating part - all that's necessary is for the kite to remain on its back for enough time to pull it up in the air ... and that's what I'm asking about: whether anyone has developed a technique for this? It's also become more of an issue because of foiling. Foiling allows for a good session in winds that are not strong enough to allow for a reliable side-launch.

Plan B would be to get a foil - specifically a Peak4, which I'm guessing would be the easiest to hot launch in these conditions. As I have had zero income for the last 3 months because of the coronavirus, shelling out extra money is not really possible at the moment.

You're location sounds worse than mine with all the long grass and shrubs.
Inspired by your question however, I decided to go out and film a solution I got from watching an old Genetrix video. That video is no longer available on youtube unfortunately.

Conditions during filming were all or nothing, typical of inland flying. 0 - 20 knots. Anyway, hope it's of some use.

RedSky wrote: ↑
Fri Jun 12, 2020 3:30 am
You're location sounds worse than mine with all the long grass and shrubs.
Inspired by your question however, I decided to go out and film a solution I got from watching an old Genetrix video. That video is no longer available on youtube unfortunately.

Conditions during filming were all or nothing, typical of inland flying. 0 - 20 knots. Anyway, hope it's of some use.


Great video! I think the "light wind" technique might work best in my situation. This is what I was looking for - somebody who has actually laid the kite on its back to hot launch it. There is some risk of ripping the canopy if it snags on anything on the ground, but a soft bag containing just the right amount of stuffing/weight might do the trick.

This is what the spot looks like. Parks Canada has thoughtfully provided a series of metal posts (presumably with the idea of securing a fence to prevent people from falling down the cliff) along the shoreline to increase the hazards. Bear in mind this is in early May. As the summer goes on everything grows - the grass becomes waist high & the shrubs become larger. 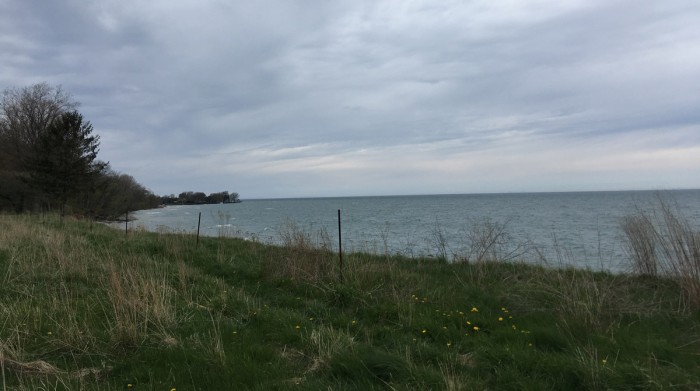 Thanks! The council love to place obstacles in our way. You need to pack an electric strimmer next time. Give the launch area a nice trim. When nobody is watching of course.

Since those earlier photos were taken the vegetation has "filled in". The long grass is a hassle, but more of a problem is the bushes & shrubs, particularly a scattering of what I think are wild strawberry bushes, which are strong enough to grip a line & have thorns.

On the positive side, the water level in Lake Ontario has lowered significantly from the last 3 years leaving a serviceable beach area for hot launching. I have used this successfully for the last 3 sessions. I use the foil board as a "backstop" for the kite, along with a kite bag on the trailing edge. Works perfectly, at least in low winds relative to kite size. The most difficult part is positioning the kite on its back with the trailing edge into the wind - this is not something the kite naturally wants to do! 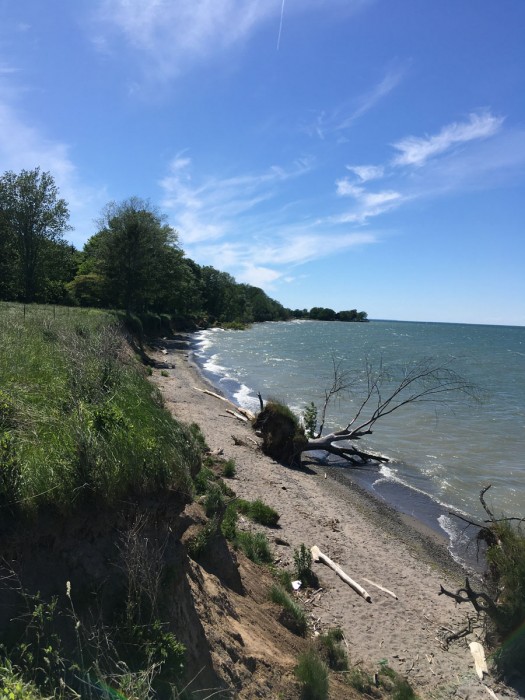 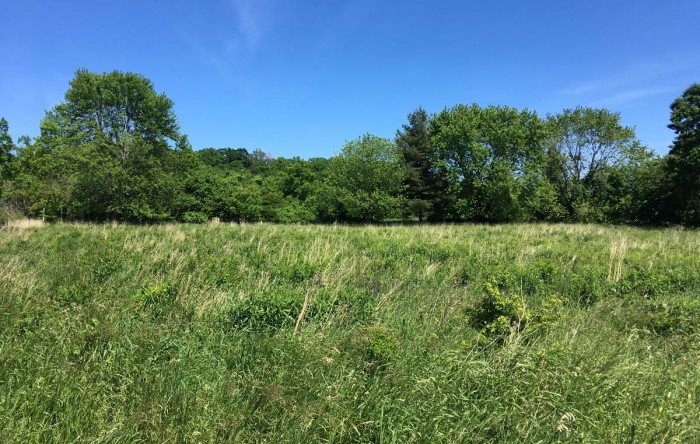 Great location though. The trouble with my video of course is that it only works on ideal surfaces. I can see your problem.

How about if you lay your kite on its back, TE into the wind, BUT place the kite behind a netted windbreak. When you're ready to launch, just pull on the front lines to raise it up above the windbreak.
Also the lines should sit above the grass and shrubs as they lay over it. You can adjust the height of the windbreak too.
By the looks of it, those stainless retaining pegs should be easy enough to push into the ground by hand. 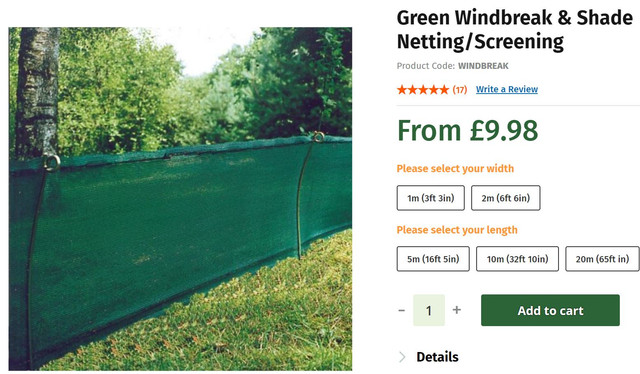 Anything's easy when you have the right accompanying music!

As I've pointed out already, I don't have a smooth, short grass launch area. Laying out the lines & moving into launch position is a nightmare. Clever little gizmo from Flysurfer though.

It IS a great location for foiling though, in that the wind is side shore, there is no shorebreak to contend with & the water gets deep enough very quickly. It's really the only spot where the wind isn't more onshore & you have to contend with waves breaking on sandbars quite far out. I already have a windbreak (picked up in Portugal) but don't really want to lug anything else down to the shore (it's about a 500m trip). Incidentally, I tried using a sandbag to hold down one of the wingtips last time. It didn't work well, as unlike bagging a folded wingtip (old school) the bag did not slide off the wing tip readily. Practice will lead to a better technique I expect ...
Top

Brand Affiliation: None
Has thanked: 135 times
Been thanked: 1 time

RE protecting the canopy laying on its back, perhaps a small thin tarp could work. I'm thinking of the light and cheap ones you get for 20 USD. And tent pegs. But it's an extra thing to carry...
Top

A nice sandy beach would work fine - just push sand along the trailing edge to hold it down. My beach is a mix of sand & stones (& wood), so it's a bit less canopy friendly. It would be hard to make sure the tarp is secured before & after launching. In a hot launch the kite does pop up very readily though, so there's not too much abrasion during the actual launching process. As I said, the tricky part is getting the kite into a trailing edge forward position - it really doesn't want to go there!
Top
Post Reply
35 posts