Nice. Maybe show that to the people you don’t want at your local!
Top

Here is more information about Steve Schafer's accident in the memorial I wrote for The Kiteboarder Magazine in 2010.

Steve Schafer (38) died following a shark attack on February 3, 2010 off Stuart Beach, FL. He may be the first kiteboarder to have been lost in a shark attack worldwide. Steve was self-rescuing 500 yards offshore, kite on the water when his leg was badly bitten severing the femoral artery, disabling him. Lifeguard Dan Lund heroically rescued him on a paddleboard despite circling sharks. Tragically Steve succumbed to blood loss. Surfer shark attacks are not uncommon in Central Florida waters. Minor injury usually results from these accidental attacks by spinner and blacktip sharks, preferring fish over humans. Such sharks were migrating in large numbers through the area. A more aggressive 9 ft. bull or tiger shark is thought to have attacked Steve. These large sharks prey upon the smaller sharks in the migration. Sharks are often seen by area surfers and kiteboarders. In time, these watermen become desensitized to them. Information is still being gathered but kiting alone well offshore during a shark migration, being in the water for an extended time and severing of this vital artery contributed to the attack and tragic outcome. Reported shark attacks on kiteboarders worldwide have been extremely rare, less than ten in ten years.

Steve was a remarkably well liked and respected waterman. He was a natural, very skillful surfer, riding waves off this area for decades. He had even surfed in competition with Kelly Slater once. Steve started kiteboarding about 7 years ago and advanced rapidly. He loved to ride strapless on downwinders in the abundant waves of the area. Many called him the “nicest guy on the beach” without a negative word for anyone. He was said to bring out the best in people. His kiteboarding style was “smooth” particularly in waves. He could do kiteloops, front and back rolls, transitions, etc ... but mostly he rode with a special style. “Steve might throw a perfect kiteloop and his friends would go off about it. Steve would just drop his head and kind of smile. He was humble in all his abilities as a kiter, surfer, artist and friend.” He was a quiet man but when he said something, it meant something.

Several hundred friends, surfers and kiteboarders came to the Memorial at Stuart Beach. A hundred paddled out to form a circle to say words and honor Steve. Funds are being collected to erect a sculpture in his honor through the “Memorial Stephen Schafer” Facebook page.

The world is a poorer place with your passing Steve. Rest In Peace.

When I tell people that I kite in Cape Town for 2-3 months each southern summer they always ask about great white sharks. I tell them that for the most part they stay on the warmer False Bay side (where indeed there are regular attacks on surfers and swimmers and hence shark-spotters on the cliffs above to warn the beaches below), rather than the cold Table Bay side, and that in 20 years of kitesurfing with endless people body dragging and beginners in the waves, no kiter has been attacked there, at least to my knowledge.

On the other hand, there is a favorite flatwater spot at the mouth of the Breede River at a village called Witsands. A few years ago, after kiting there for the first time, I was back home and with jetlag channel surfing late at night, came across a "River Monsters" episode that looked remarkably like that spot, and indeed he was catching a 1 ton bull shark. Yikes! However, to date they only eat fish off fishermen's hooks.

And on a third hand, I grew up in East London further up the east coast with the warm Indian Ocean and we had regular bull shark attacks on swimmers, but no great whites. Since then there have been several fatal great white attacks on surfers at the local surf spot, called Nahoon Reef, with plaques memorializing them on the rocks along the walk to the water. There is even an amazing YouTube video of a surfer being hit by two great whites at the same time, and he escaped with a bitten hand, below. When I kite there now I prefer to be on twintip so I don't fall off my surfboard.

This a much later interview with the guy.

A few years ago when I was kiting in East London at Nahoon beach I took a break to visit the little museum next to a cafe above the Nahoon Reef parking area where they have Shannon Ainsley's board on display. 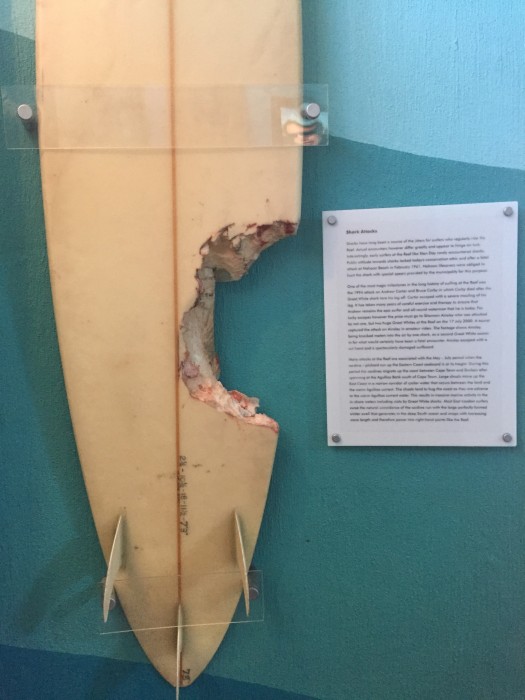 When I worked as a lifeguard for the National Park Service (A loooooong time ago!) I saw sharks all the time. Most of the sightings were between the lighthouse and Frisco. They had a marine biologist brief us at the start of the season who told us that sharks are like dogs in a neighborhood in that they are always around.
Top

Apex predators, just remember where you fit on the food chain. As much as we have tried to remove ourselves from the food chain on land, it is very different in the ocean.

Hugh2 wrote: ↑
Wed Jul 29, 2020 6:18 pm
Want to freak yourself out? Try clicking on each of the white sharks tracked on this site and see how they cruise up and down the US east coast each season, including lots of time from Florida to North Carolina to Massachusetts, plus a few excursions into the Gulf of Mexico.

That is scary and just think of all the sharks that don’t have trackers!

I’ve never been convinced this electric current devices prevent shark attacks. I talked to guy once that was using one While kiting and he told me it shocked him a lot when he was in the water.
Top
Post Reply
17 posts