For anyone with an Insta360 or GoPro Max, this is likely the line mount you're looking for. Enes Mentese out in Berkeley came out with this mount a few months ago, and it solves the old problem of having 70% of your field of view being obstructed by the line mount itself. This is accomplished by putting the stitch line of the camera in the same plane as the center lines and the mount itself. 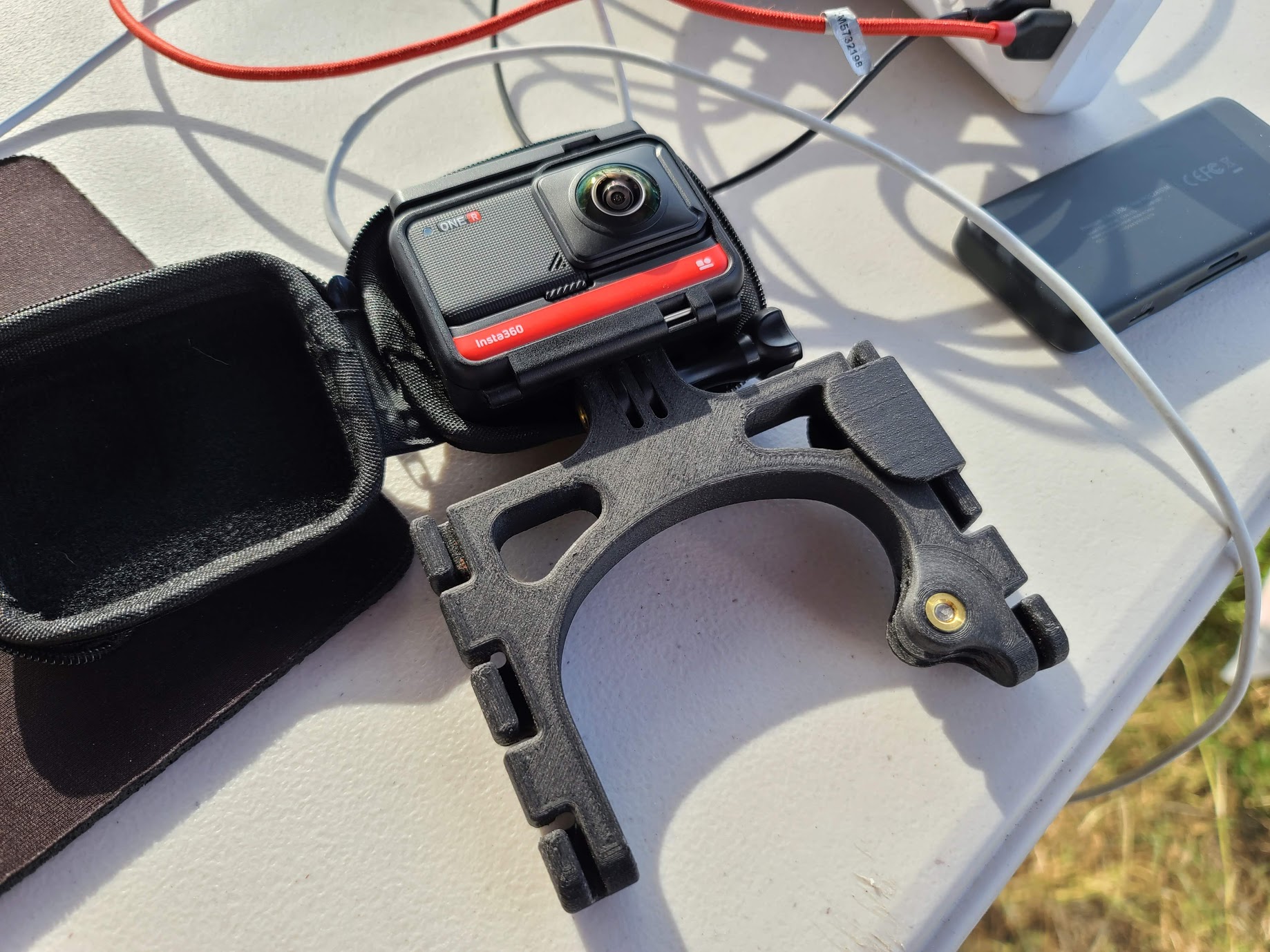 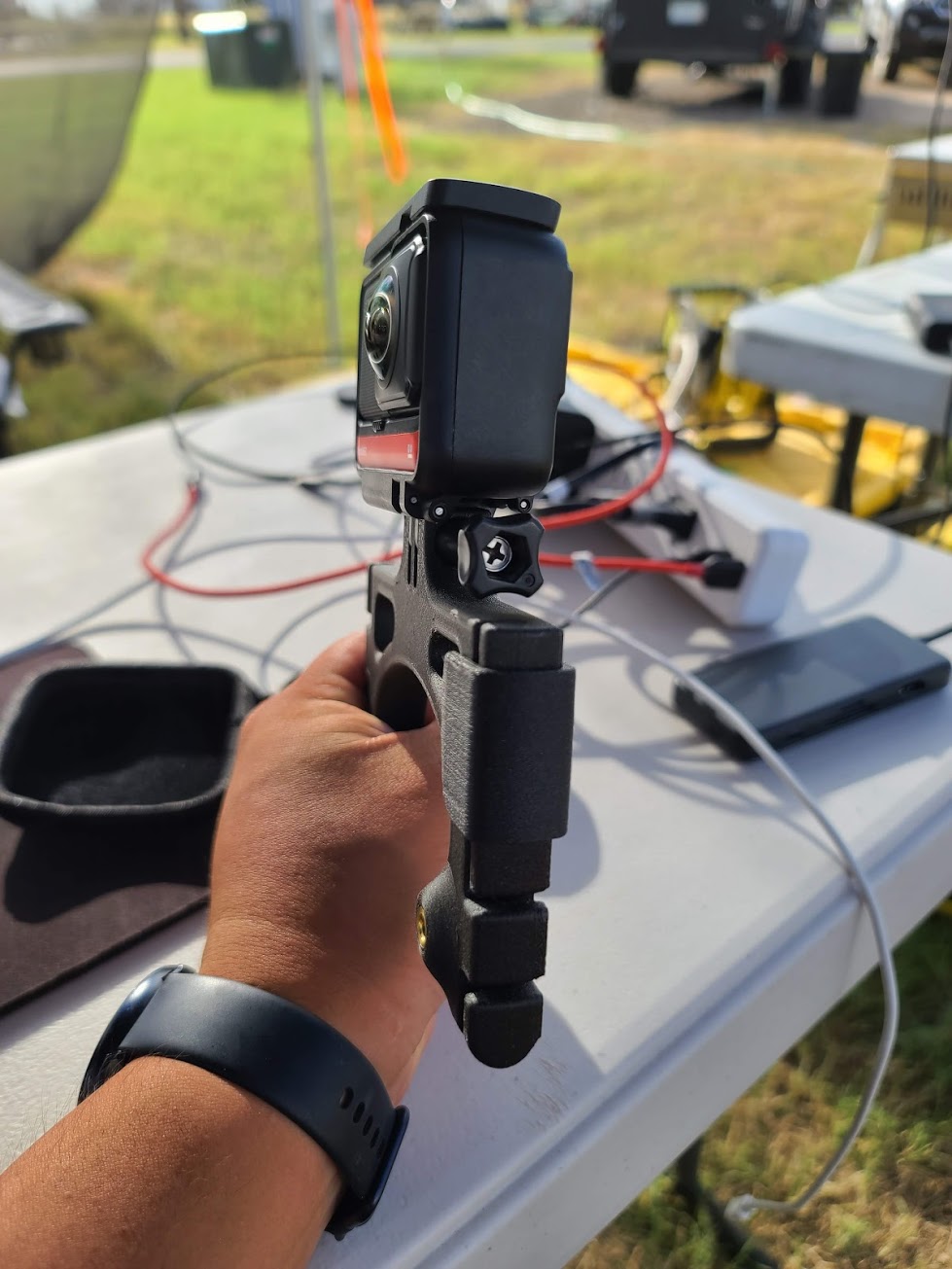 boom - no more line mount in the image anymore 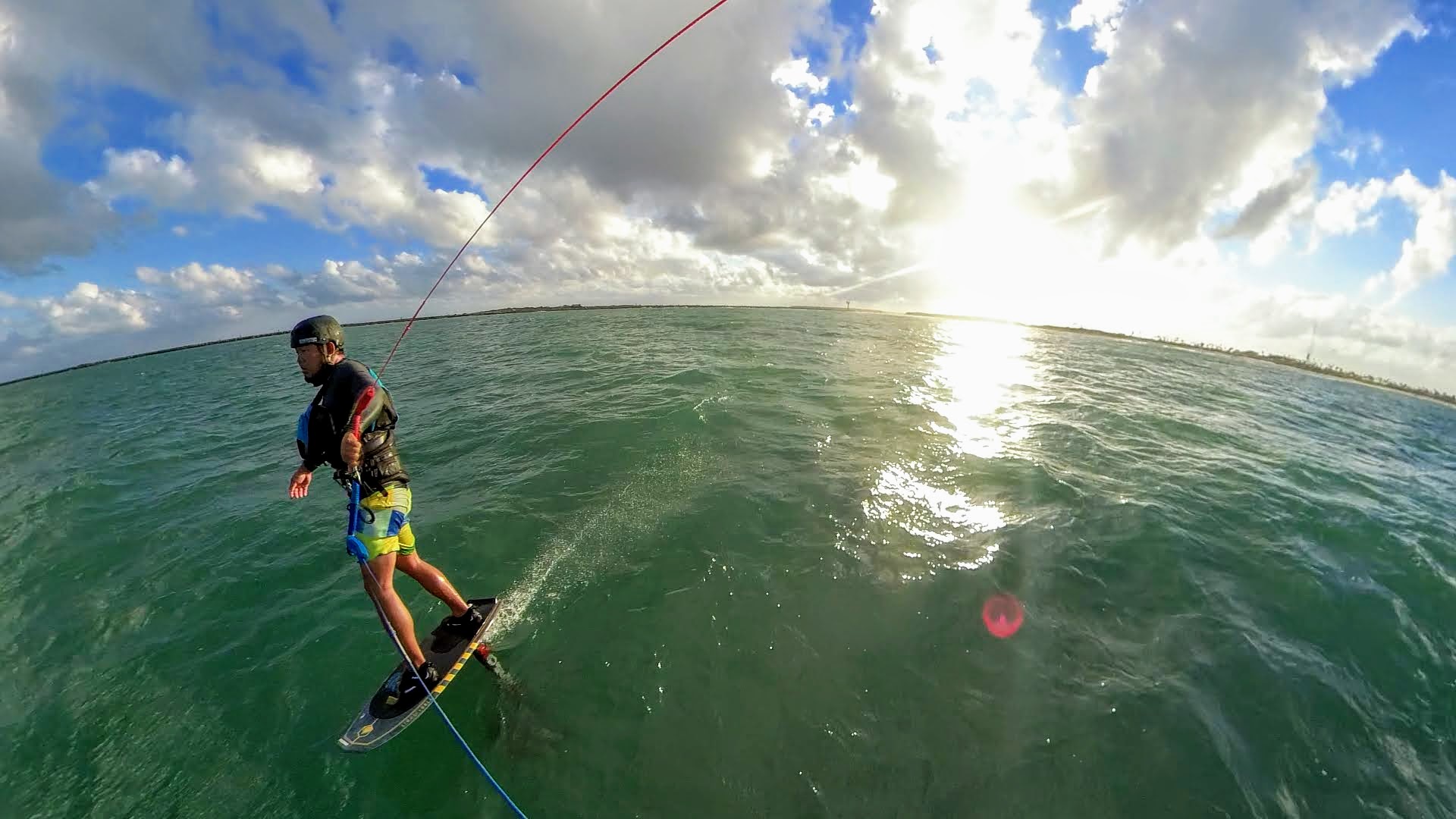 The mount itself is 3D printed with brass inserts for the attachment screws. It uses standard gopro style 3 fin tabs for securing cameras. The first iteration of the mount had longer tabs that were specifically designed for the GoPro max, to keep the camera from rotating out of alignment. However, these non-standard longer tabs also meant it wouldn't work with the Insta360 One R or other cameras that used the standard length tabs. The second iteration fixed this. The tradeoff being you need tighten the screws or the camera will rotate out of alignment with the mount/lines. Use a screwdriver to tighten it, not just the thumbscrew.

The mount has an additional 90 degree mount option on the inside for attaching regular gopro/action cameras that point down the lines towards the rider. One side of the mount has larger spacing for your flag line to slide easily. The other side grips the second center line securely. The mount also came with a 3D printed clip that went over the side of the mount once the flag line had been placed inside, for additional security I guess.

While the mount solves the placement issue of 360 cameras, it still doesn't do anything about how fragile they generally all are. For launching, I had to have somebody hold my kite, and another friend hold the camera off the ground, while I was launching. Allowing your camera to lay on the ground is a sure fire way to scratch the wide angle lenses. On landing, I had the kite catcher hold the kite on it's side while I kept tension on the center lines until I could reach the camera mount.

Here's a quick video from the same session.

Bonus fun, it looks like you're on a two line kite since the center lines get stitched out as well.

I think this is the current line mount to get if you've got a 360 Camera or are planning on getting one in the future. Enes' website and the line mount can be found at https://menteselabs.com/
Top

I ordered mine a few weeks ago, just makes sense from a design perspective compared with whats out there, and good to see your footage showing it works in practise

I also bought the insta360 one r and seen mixed reviews on use on water with action, what has your experience been? It seems youre not using a waterproof housing, have you had any major wipeouts or had the camera caught up in shoredumps/waves?
Top

Using it with a housing degrades the image quality and I also experienced fogging. They advertise the camera as being water resistant but others online have noted their cameras have died after kiting or surfing. I intentionally keep it a bit more conservative while using the camera on the lines.
Top

Please, do NOT buy this product, it is a SCAM. I paid 70€ and never get the product or anwered back.
Top

Very surprising comment. I've purchased and have used this mount for maybe a year now with great success. I use it with a GoPro 9 and GoPro Max. I lost the little clip that goes over the non flag out line recently and ordered more direct with about a month lag time. Best GoPro line mount i've ever used.
Top

Hi again, I have to retract myself from the comment I posted as today I have finally recieved the shipment confirmation. In any case, it has been a few weeks of absolute silence, where I did not get answered to my emails. I will keep you posted when I receive the product (if I finally receive it).

Maybe it is a good product, but this company has to take things more seriously in the future if they want to really succeed. I was already planning to sue them util I received the confirmation...

I keep introducing the tracking number they emailed me but it seems nobody has taken the product to the shipping company, they have only created the label.

WARRIOR_90 wrote: ↑
Wed Nov 17, 2021 9:02 pm
I keep introducing the tracking number they emailed me but it seems nobody has taken the product to the shipping company, they have only created the label.

give it a bit time, I had this too from a shipment from another country with another company.
Might show soon...so, keep an eye on it.

WARRIOR_90 wrote: ↑
Wed Nov 17, 2021 9:02 pm
I keep introducing the tracking number they emailed me but it seems nobody has taken the product to the shipping company, they have only created the label.


This is very normal with many shipments all over the world.

Just be a bit more patient, I can see on your post dates you only had waited a few days.

Have got several products from Mentese Labs, no issues.

Be patient with shippings, and in general, hold a bit back on the emails, is my advice.