Can I fix this chickenloop?

Can I fix this chickenloop?

My buddy and I went out snowkiting a few days ago and it was great...mostly. I'm using a bunch of gear I bought back in 2006 when I first got into kitesurfing and it's held up very well (with some minor bladder/valve repairs and bar end replacements). Anyway, I got my Best Waroo 9m all ready, went to hook in...and the donkey dick shattered in the cold...bummer. I've already ordered my PKS lock tube, so that should work for that bar...

I got out the bar for my Best Waroo 11m, went to hook in...and the chicken loop plastic cracked and fell apart. I ended up using it anyway and it worked fine with just the line, but I'd like to replace/repair it if I can...any tips? 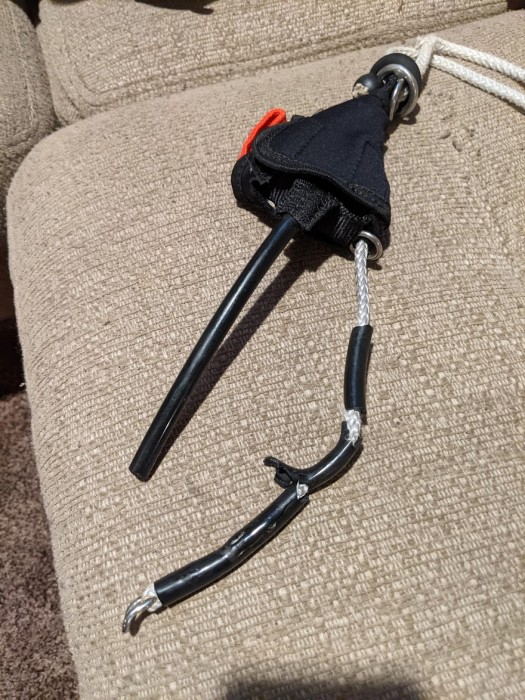 Also, since Best no longer exists...and all my gear is theirs, anyone have any recommendations for upgrades, new (to me) kite gear that would be good replacements, etc.?
Thanks!
Top

Brand Affiliation: None
Has thanked: 38 times
Been thanked: 35 times

I had that exact experience a few years ago with my old Best bar. I wrapped the rope with thick black fiber tape to keep it from wearing. If your harness hook is smooth, then picking off the plastic and using the bare rope is not really different than the rope sliders that are so popular these days.

If you want a newer bar, PM me. We can probably work something out between two old Best riders.
Top

Looking at your usage of pulling the kite and bar out of the garage after years of storage I would just duckt tape it and call it good. The rope still looks fine and you only want to mitigate the wear on your harness hook. G
Top

Brand Affiliation: NONE F--- the corporate world
Has thanked: 198 times
Been thanked: 223 times

The plastic, either polyurethane or nylon, has essentially degraded from age. That makes me think you may want to consider sone other critical parts may have done the same.

You will have probably seen that modern Chicken loops are expensive and a lot are designed to work with covered line. However I have found a possible source of a Chinese design that has worked well for me for several years and used to be on eBay. It has a good rotor head for 5mm line and flagging channel for 3mm line. Compared to expensive units the release collar moves with similar force but the loop requires more force to actually disengage. (This may have improved since I bought mine but, possibly, a consideration.)

Be grateful if you let me know if you buy one, as I am looking for a test bunny to try grandado kitesurfing as a source of budget gear LOL.
Last edited by Herman on Thu Feb 11, 2021 9:46 pm, edited 4 times in total.
Top

Flashpipe, I had all Best gear for a decade from 2007 till 2017 and mostly loved it. My Warroos were great, when compared to my previous three C-kites (North Rhino and two Naish kites). I still have one of those old Best bars in my shed if you want it. The later Best kites were sometimes better than Waroos, like the Bularoos, Kahoonas, and Cabos, but sometimes worse like the Nemesis and late model Waroos (2010/2011). I sold my remaining Waroos in Cape Town last year for pennies, and still have a 2007 or 2008 Waroo 14m, and two Bularoo 16m kites that I seldom use now that I foil. I still love the later Best bars, redline and blackline, but have worn both of mine out repeatedly and like you cannot obtain parts to fix them.

In 2017 I began a change over to Naish Pivots, largely based on comments on this forum when it was first released in 2015. I have bought eight of them now, including the really amazing 2020 10m that I love. But most any of the modern three-strut freeride kites offered today would be a huge improvement for you over a Waroo, and any modern bar that has single-front-line flagout would be a major improvement in safety. The latest "seatbelt" style chicken loop locks are a major improvement, so I got the North Navigator bar, and despite some issues with the encapsulated front lines, I like it a lot.

Get new plastic tube(polyrethiane) from pneumatics shop.
They got blue and black mainly.
8mm inner and 10- would do the trick i believe.
Just repaired Rrd bar CL that way.
Top

Awesome!! Thanks to everyone for the replies. Going to keep this gear going as long as I can so that when I do finally break down and get new gear, I'll really appreciate it.

Oh as you mentioned that you were snowkiting. Try to open the QR with mittens. I doubt you can pull that mini loop. You might want to mod there a bit too